Atrangi Re movie review: Dhanush was one of the nicer elements of ‘Raanjhna’, which came from the same team. Here, he rises above the clunkiness of his character, treading between a dutiful familial union and falling in love with a strange stranger. 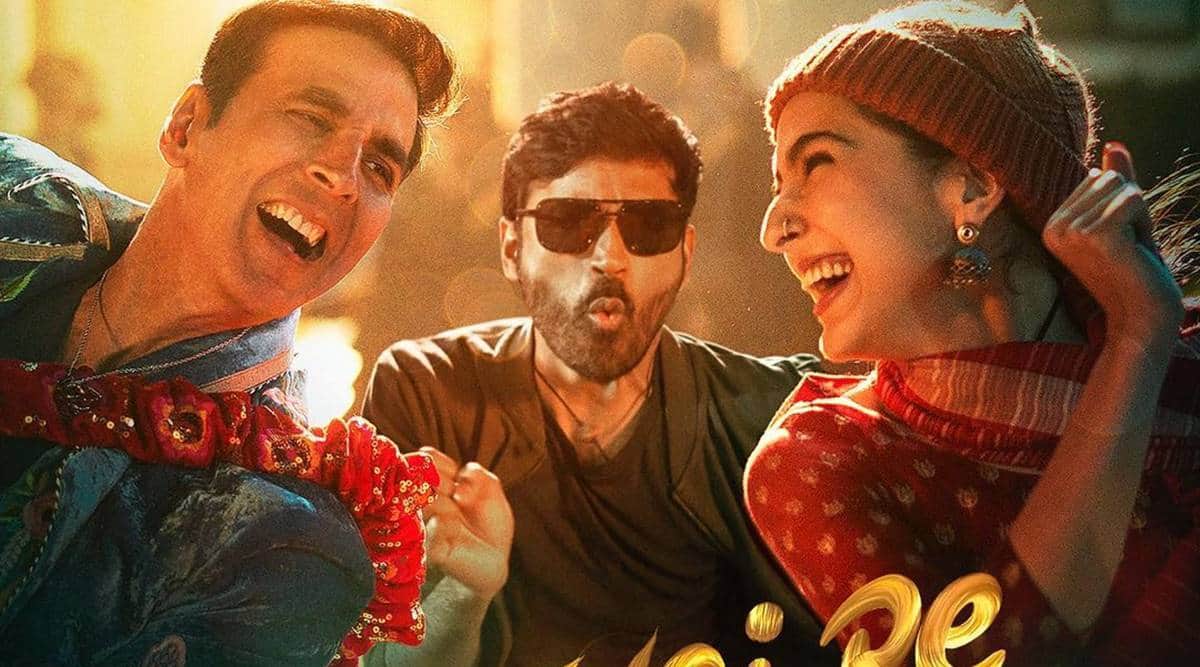 A still from Atrangi Re.

Runaway girl. Sincere, confused boy. And a charismatic man with several magic tricks up his giant sleeve. The great Bollywood love triangle gets a new angle. But wait. How fresh is the coat of paint? And, most importantly, does it sweep us off our feet, as it is meant to? Sadly, no. The premise holds out promise. But the execution is a relentlessly downward spiral.

Take, for instance, Rinku Sooryavanshi (Sara Ali Khan). When we see her first, she is running away, with some men chasing after her. Instantly, we are worried. Who is she? What is she running from? Who are these men?

As soon as the answers start becoming clear, with a heavy grandmother figure (Seema Biswas) breathing down her neck, the intrigue level starts fading. And we are confronted with yet another version of the manic pixie dream girl, busy channelling her inner Geet (Imtiaz Ali’s most popular leading lady has a lot to answer for) as she finds herself on a moving train, heading from Siwan to New Delhi, with the sober, steady Vishu (Dhanush).

Bisu (Rinku is from Bihar, she cannot pronounce the V) Babu, studying to be a doctor, has his own personal preoccupations. But in the best tradition of the manic pixie dream girl, everything else is swept aside, leaving only Rinku and her troubles centre-stage, the biggest being the man she has been obsessed with for many years, ‘jaadugar’ Sajjad Ali Khan (Akshay Kumar).
Much of ‘Atrangi Re’ is full of these slightly off moments, which in another movie would have been a perfect tonal match for a leading lady who is meant to be a little off kilter. ‘Atrangi’ means weird, but in an affectionate, nice way: Sara Ali Khan tries very hard to be different-persons-in-one-person, but neither the writer nor the actor provides enough depth to the character. She comes off exaggerated instead.

In between, Bisu Babu’s BFF (Ashish Verma really needs to get other kinds of roles), also a doctor, lines up a bunch of people he labels as ‘schizophrenics and bipolars’ to explain away some of the ‘atrangi’-ness on display. Some amount of depth would have given us things to think about. How are minds different from each other? How are these different minds to be treated? Films dealing with mental health issues need to be very careful about how they position and posit their characters: scenes where you casually fling round labels are a huge problem, as is the propensity to keep slinging ‘corrective’ pills into peoples’ mouths (this strand is played strictly for laughs). I think psychiatrists should sue Bollywood for the sweeping ignoramuses they create for ‘dimaag ka doctors’: that one scene is enough to make you cringe-watch the rest.

Why is it important for a Muslim character to be shown in a Moharram procession? Just so that another character can whip herself into a frenzy? If you are trying to break stereotypes (Anand L Rai and Himanshu Sharma have been the architects of the female-forward ‘Tanu Weds Manu’ films), then why this? Something stronger should have come out of this Muslim-Hindu ‘milan’: Akshay steps into his own ‘atrangi’ part with a degree of zest, but there’s no way that he doesn’t look a mismatch with the much younger Sara Ali Khan.

Thank the good lord, whichever religion you believe in, for Dhanush. He was one of the nicer elements of ‘Raanjhna’, which came from the same team. Here, he rises above the clunkiness of his character, treading between a dutiful familial union and falling in love with a strange stranger, and treats us to an actor who works through his beats to get to where he needs to be going.
This was meant to be a meaningful magical mystery tour, but ends up as a misfire.