83 movie review: Ranveer Singh plays the captain’s knock in this blood rush of a movie

83 movie review: Ranveer Singh disappears into his Kapil Dev even as each of Kapil’s Devils is given their own moment in this faithful recreation of India's 1983 World Cup win. 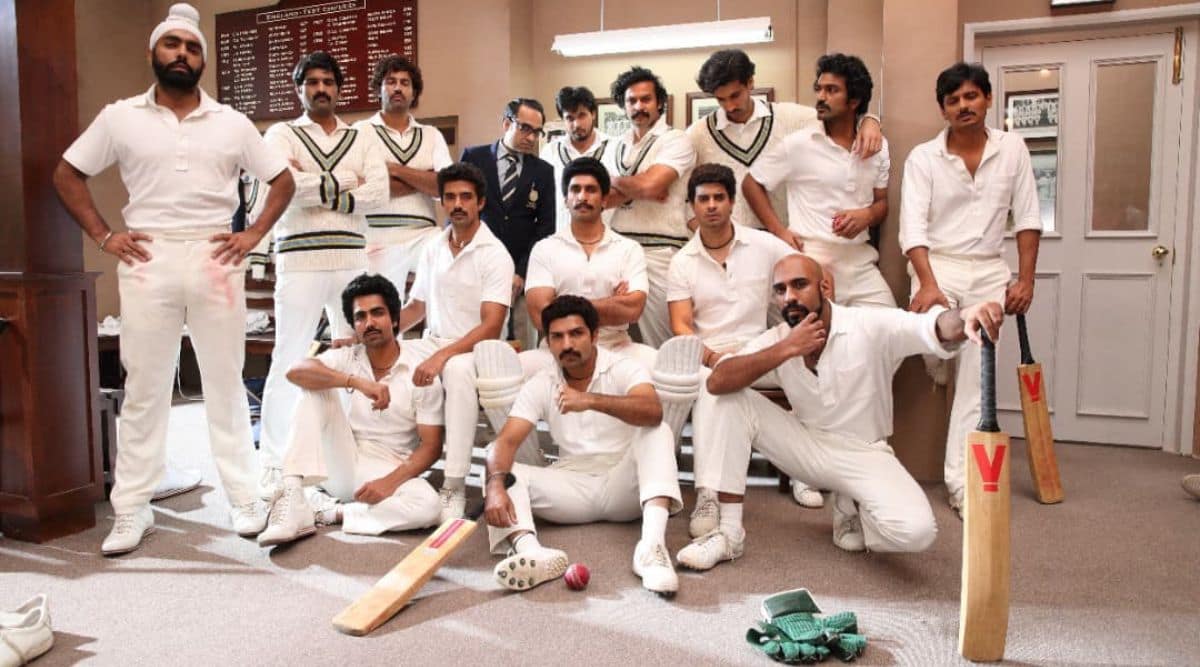 83 movie review: Each player, some of them looking remarkably like their real-life counterpart, is given a moment.

Some days are unforgettable. 25th June 1983 was not just the day when India won the world cup final for the very first time at Lords: that victory was the turning point of how we saw ourselves as a cricketing nation, and how that incredible win fed into the veins of a country that till then had seen itself as also-rans on and off the cricket field. The next morning, banner headlines screamed ‘The Cup Is Ours’, and nothing was ever the same. It was a blood rush to beat all blood rushes.

Kabir Khan’s ‘83 recreates that day with fidelity, and, yes, let it be said, in full Bollywood style, suffused with song, dance, drama, colour. It pads the film with a few (fictional?) elements meant strictly to play to the gallery, and it skates dangerously close to pandering to the overbearing nationalistic sentiments playing out in today’s India. How else are you meant to feel when the face of a player is limned against the national flag, and the scene is held just that tad bit longer just so you don’t miss the connection? Why would you choose to focus, repeatedly, on an old toothless Muslim man gleaming with glee, or a little boy waving the Indian flag, or the bunch of Indian soldiers on the border gathered breathlessly around the radio? Yes, cricket-mad Indians could well stop rioting, troops could defuse a communal situation, and we could all ‘unite’ over a match, but some of those scenes have a tinny Doordarshan-like feel to them. The Kabir Khan of ‘Bajrangi Bhaijaan’ may have toned down the populist touches, but this is a different India, and the playing fields are different.

But, I have to say this too, that we don’t let it ruin the moment. And the movie. We take note of it, acknowledge that the film could have done with some pruning (its runtime at 2.5 hours does feel stretched in bits), and go right back to cheering. Because, man, that was a win, and sweeter because no one, which included most of the Indian team, the team’s manager P R Mansingh (Pankaj Tripathi), the sneering English officials, crickets followers back home, believed for a moment that something as momentous as this was even possible.

Except for one man. India captain Kapil Dev (Ranveer Singh), who never takes his eyes off the target. What else are we here for, he says at a press conference? The light in his eyes and the confidence in his voice makes us believe. He is the man on the spot, managing overweening egos, chivvying his players, and keeping up the team spirit. One of the things that the film does well is to hint at the problems Kapil had through that English summer with Sunil Gavaskar (Tahir Raj Bhasin), who is shown both sulking and skulking at not being given his due: how could this upstart, the rough-and-rude Haryanvi lad who didn’t play nice and gentlemanly and all things cricket, be made India captain?

But cometh the hour, cometh the man. This line, as any cricket-loving, commentary-devouring fan would cringe at, was never as true as when Kapil and his Devils tore through the mighty West Indies in that historic final, fending off the Australian and the Poms, helped with the historic 175 runs Kapil Dev made against Zimbabwe. It was truly a captain’s knock, sadly undocumented because the BBC was on strike that day.

The horsing in the locker room and the easy banter is recreated well. A scene where K Srikanth aka Cheeka (Jiiva) drags along Kapil and another teammate to devour dosai at a doe-eyed South Indian girl’s home, is played strictly for laughs. But it does give us a glimpse into the lives of the players: who were these guys when they were not playing for guts and glory on the field? Facing hostile bowling in those days without the armour that cricketers these days take for granted took immense courage: those killing bouncers from Andy Roberts and Michael Holding (the actors playing the West Indians are properly smug) which took skin and bone and drew blood were the stuff nightmares are made of. Each player, some of them looking remarkably like their real-life counterpart, is given a moment. Jiiva nearly steals the film with a brilliant monologue, where he stares down a snooty British journalist (I’d happily see the film again, just for this). Ammy Virk as Balwinder Sandhu, Saqib Saleem as Mohinder Amarnath (one of the running gags in this film is the ‘real’ Amarnath playing his father, ‘Lalaji’), Jatin Sarna as Yashpal Sharma, one of the chief architects of the win, Boman Irani as Farrokh Engineer, first stoic then excitable in the commentary box, and the irrepressible Pankaj Tripathi all stand out. The presence of Deepika Padukone, playing Kapil’s wife Romi, on the other hand, could have been better used; she literally brings up the rear. Maybe that’s what cricketing wives, also known as widows, do, but when even the main scene between them is turned into a chance for Kapil to give one of his we-can-do-it speeches, you wish we could have been witness to something tender between them. And Neena Gupta as Kapil’s supportive mother comes off near-stock, there just so he can recall her ‘jeet kar aana’ line.

But it doesn’t matter. The one who takes us past all these niggles is Ranveer Singh, disappearing into his Kapil Dev. ‘Aukaat se zyada khelna padega’, he says, sounding remarkably like Kapil, and goes out and does it. The slightly protruding teeth, the discomfort with English (those self-deprecatory digs at himself are smile-inducing), the deliberate delivery, the never-say-die spirit, is all spot on. (We see the real-life Kapil cheerleading from the stands, and the house comes down). Batting, bowling, being ‘cap’, staying on top: his playing ka koi jawaab nahin.