Oru Adaar Love has finally hit the screens exactly a year after its first song Manikya Malaraya Poovi broke the internet. Little did the filmmakers know that their film would achieve such popularity across the country when they released the song during Valentine’s week last year. And, Priya Prakash Varrier, who appeared for just about 30 seconds in it, became a social media sensation, thanks to her world-famous wink.

The film has, reportedly, opened on about 2,000 screens worldwide today. Along with the original Malayalam version, the film was also released in Tamil and Telugu.

Oru Adaar Love is written and directed by Omar Lulu, who has films like Chunkzz and Happy Wedding to his credit. Billed as a love story, the film is majorly set in a school. It tells the story of class 12 students starring a bunch of newcomers, including Priya Prakash Varrier, Roshan Abdul Rahoof, Noorin Shereef, Michelle Ann Daniel, Mathew, Siyadh Shajahan, Dilrupa Aswad Alqamar, Vaishak Pavanan and Yami Sona.

Oru Adaar Love opens with a cultural fest accompanied by a pleasant song scored by Shaan Rahman. It is a montage song filled with beautiful faces, capturing candid moments of random individuals at the fest. These people we see contribute nothing to the narration that follows. They were just there to lighten the mood before director Omar Lulu could re-burden our mind with the senselessness of the human race.

Priya Prakash Varrier would like to outgrow the 'wink girl' tag

Priya shared with indianexpress.com, "The ‘wink girl’ tag is definitely helping me a lot with all the recognition and popularity. But I would like to outgrow that tag someday. Initially, it was hard to accept that something like this was happening. I am trying to enjoy it."

Check out the poster of Oru Adaar Love 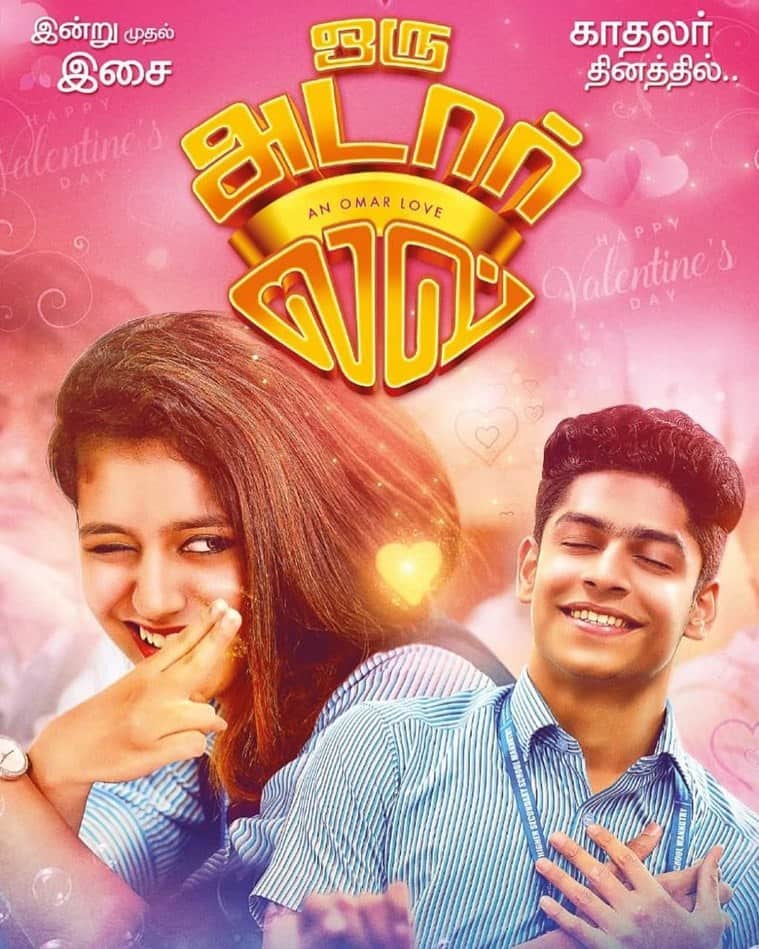 It’s not a dream!Met my favourite @ranveersingh 🌸He’s dapper and the energy he has is unmatchable! @itsrohitshetty sir I’m a great fan of your work and would love to be a part of it someday🌸 Been very fond of you and the dedication you have for cinema since SOTY @varundvn 🌸I don’t think there’s anything that is to be said about our very own sheila,chikni chameli and everything she’s yet to be @katrinakaif 🌸Special thanks to @vickykaushal09 🌸URI is a must watch!

This is how Priya Prakash Varrier handles trolls

Priya told indianexpress.com, "Initially, it used to bother me, and I didn’t know how to handle all that because they were the same people who gave me so much love and then they started putting me down. That was disheartening in the beginning. But now I am okay with all of that."

Priya Prakash Varrier on being the most Googled person

Priya shared with indianexpress.com, "I wouldn’t say there is a loss of privacy. Initially, there was a curfew at home that you cannot go out like before. But I didn’t want to give up on those things. I really enjoy going out with my friends and doing all those normal things."

Priya Prakash Varrier shared with indianexpress.com, "I have got a lot of offers from different industries including Tollywood. But then I have not been able to commit to anything because since past one year, we have been working on Oru Adaar Love. When the song got released, we had only shot for the song and the whole movie was left. That is why I couldn’t commit to any other movie in the past year."

Priya Prakash Varrier told indianexpress.com, "I have heard about it from others. I have not received any notice in person. I wouldn’t want my movie becoming a controversy. At the end of the day, everything is publicity. But still, I would rather stay away from the negativity. It’s up to the director and the producer to handle those issues. I am just playing the character that has been given to me."

Priya Prakash Varrier told indianexpress.com "We have been shooting for almost a year and so, the expectations are really high. We have tried our best. The film is going to be an entertainment package and the story is mostly about school life. It gives you some good moments that you can relate to."

Roshan Abdul Rahoof is watching his release Oru Adaar Love. The actor wrote, "Need all your love , support and blessings!!" along with a post he shared on Instagram.

Priya Prakash reveals Manikya Malaraya Poovi was to be withdrawn?

Priya Prakash Varrier revealed in an interview that Manikya Malaraya Poovi song was about to get cut from the film. "There were some cases from Hyderabad about our first song. At one point of time, there was this arrest call. The case was against me, the producer and director. Initially, I didn’t know anything about it. The director and producer were very tensed and all of a sudden, they called me and said that they were withdrawing the song. We were about to withdraw the song," the actor said.

Did you see this photo of Priya Prakash Varrier and Roshan Abdul Rahoof?

In an interview with indianexpress.com, Priya Prakash Varrier said that she has been getting film offers but she could not sign anything because of Oru Adaar Love. She said she missed an opportunity to work with Telugu superstar Allu Arjun.

"I missed an opportunity with Allu Arjun sir. When the viral song was released, there was an offer to work with him. But then I couldn’t do it because I was working for Oru Adaar Love," Priya said.