Gandhi Jayanti 2019: The ideas that Bapu stood for need a resurrection in our films

The first full-scale movie made on his momentous life and death was Richard Attenborough’s Gandhi (1982), a biopic with so much sweep and sway that you almost forgot that Gandhi, that most iconic of Indians, was being played by an Englishman, Ben Kingsley. 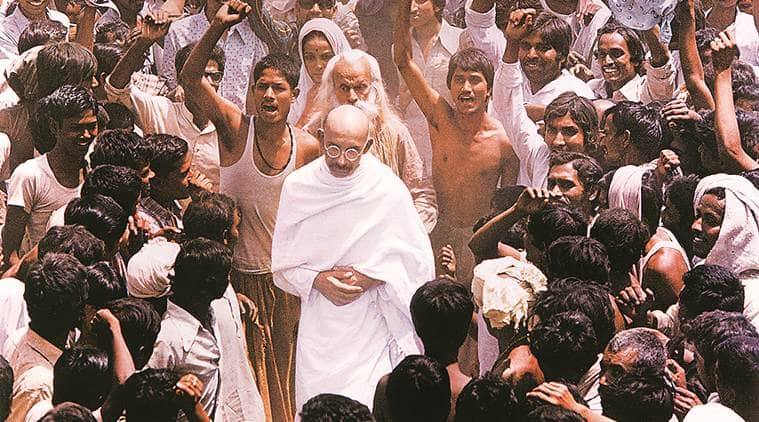 A still from Richard Attenborough’s Gandhi

One of the earliest, fuzziest memories I have of Mahatma Gandhi in the movies is not a frame but a song. “De di humein azaadi bina khadag bina dhaal, Sabarmati ke sant tune kar diya kamaal”. The film, Jagriti (1963) was way before my time, and I don’t quite recall where and when I saw it. But I remember shedding copious tears because the singer was a sad little schoolboy. Gandhi’s statute, garlanded around the bust, was right up front, and it was clear to my sobbing young self that he was the central power in the room: the boy and his fellow students, were singing both about him and to him.

The lyrics were powerful. For a post-Partition generation, the Mahatma was a saint, and Sabarmati, his birthplace, was a shrine. If it hadn’t been for his Bharat Chhodo Andolan, the British would have lingered on for much longer: this acknowledgment had seeped into the national consciousness, transmitted through the freedom fighters who crossed over into a new, free nation, born on the stroke of the midnight hour on August 14, 1947.

Slowly, Gandhi began to be visible in the Films Division documentaries which used to be shown just ahead of features. The familiar grainy black-and-white speeded-up vignettes kept reminding us of the many chapters of our lived history — the Quit India movement, Gandhi’s historic visit to London, the Dandi March, the fateful day when he was shot, the mourning, the dirges, the surging crowds. So many jerky newsreels, thousands of re-runs, and one man in the middle — frail, dhoti-clad, sitting at the charkha and spinning khadi, peering through those distinctive spectacles which came to be known as Gandhi glasses.

The first full-scale movie made on his momentous life and death was Richard Attenborough’s Gandhi (1982), a biopic with so much sweep and sway that you almost forgot that Gandhi, that most iconic of Indians, was being played by an Englishman, Ben Kingsley. We were all meant to be mollified by the fact that Kingsley had Gujarati blood, but it was small consolation. I remember thinking then, if we had Naseeruddin Shah — who played Gandhi with great conviction much later in Kamal Haasan’s revisionist Hey Ram (2000) — why bother looking elsewhere?

But it must be said that despite his sing-song delivery, Kingsley made a very believable Mahatma. He was already brown, sort of, so his browner face wasn’t as offensive as someone fully white-skinned would have been. And he invested his Gandhi with a kindly, kindling eye and a great deal of compassion: his performance was a full-bodied embodiment of the spirit of the Mahatma, and totally worthy of the Best Actor award he received in 1983. (The film also won the Best Picture, and Best Director for Attenborough.) There were several subsequent desi cinematic iterations of the Mahatma. Ketan Mehta’s biopic on Sardar Vallabhbhai Patel, called, simply, Sardar (1993), had Annu Kapoor play the Mahatma to Paresh Rawal’s Patel. Rajit Kapur made a solid Gandhi in Shyam Benegal’s The Making Of The Mahatma (1996), an account of his early life in South Africa when he first confronted racism, and began fighting against it.

In 2007, Feroz Abbas Khan’s Gandhi, My Father portrayed Gandhi as a failed father to his own son Harilal, and while the film’s wasn’t perfect, it showed us that it was entirely possible to re-create a great man’s life, minus deification, plus warts: Darshan Jariwala played Gandhi with verve, and Akshaye Khanna, the disaffected son.

Just the year before, the Mahatma had received a huge populist fillip in Lage Raho Munna Bhai. Rajkumar Hirani’s sequel to his 2003 Munnabhai MBBS, in which the medical profession was skewered good and proper. Munna the lovable goon finds an unlikely ally in the Mahatma as he goes after the greedy sharks who prey upon innocents. Just the way a jadoo ki jhappi became the panacea for all ills in MBBS, a jolly, twinkly-eyed Mahatma, played by Dilip Prabhavalkar, became someone to be befriended. By then, Gandhi had gone into a popular culture slump; Lage Raho dusted Bapu off, off a currency note, and, ‘Bole toh Gandhigiri zindabad’, went viral.

You could quibble, as some did, at the Bollywoodisation of the father of the nation. But there was no doubt that Munna’s Bapu had swept the popular sweepstakes. Overnight, the Mahatma was cool again, as was Mahatma-speak: to counter goondagiri, you needed to turn the other cheek, listen to no evil, and do the right thing.

Twelve years on, India is a different country. Gandhi is dangerously on the verge of becoming a cipher again. The other day, a friend noticed a sticker on the back of a car which said, “Main Bhi Godse”. Is this the beginning of a fresh, and this time final obliteration, of a man who stood for universal peace?

Time for another, meaningful revival.

This article first appeared in the print edition on October 2, 2019 under the title ‘The Company of the Mahatma’.

Gandhi Jayanti 2019: Artists across generations find ways to connect with, question Bapu through their work