Trailers, teasers and other promos of upcoming movies and web series like The Lord of the Rings: The Rings of Power and Doctor Strange in the Multiverse of Madness were unveiled at Super Bowl. 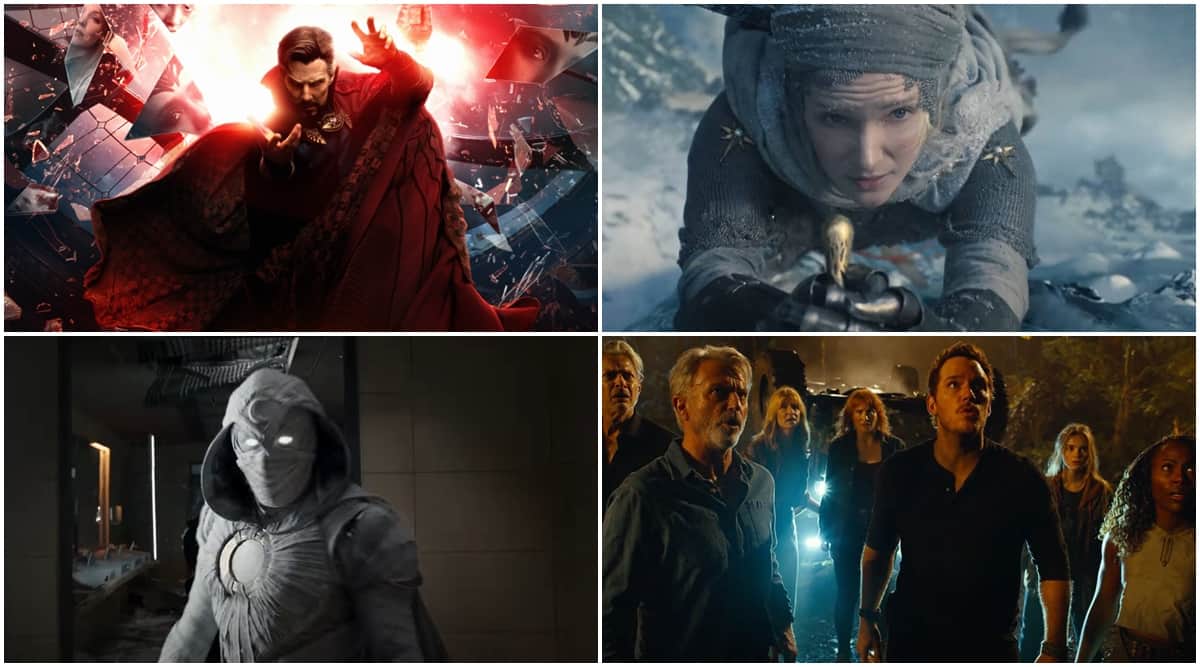 Here are all the trailers and teasers which were released during Super Bowl. (Photo: Amazon Studios, Marvel Studios and Universal Pictures)

This year’s Super Bowl didn’t disappoint entertainment buffs. Keeping up with the tradition, several new trailers, teasers and other promos of upcoming movies and web series like The Lord of the Rings: The Rings of Power and Doctor Strange in the Multiverse of Madness were unveiled at Super Bowl.

Let us take a look at all the trailers and teasers which were released during Super Bowl:

The Lord of the Rings: The Rings of Power

We finally have a look at how Amazon Prime Video’s The Lord of the Rings: The Rings of Power series looks in motion. Previously, only images and posters had been released by the streaming service. The series, which is a prequel to the main LotR story, is set in the Second Age and its budget dwarfs any TV show or movie ever made.

The teaser promises a show that is worthy of Amazon’s Misty Mountains-sized ambitions, with stunning visuals and shots of grand structures, and also beautiful scenery that evokes a suitably Tolkien-esque fantasy world.

Created by JD Payne and Patrick McKay, the series features characters both familiar and new. Galadriel and Elrond are there, but others are either lifted from Tolkien’s lore or invented for the story.

The Lord of the Rings: The Rings of Power will premiere with its eight-episode season 1 on September 2, 2022.

Doctor Strange in the Multiverse of Madness

Directed by Sam Raimi, Doctor Strange in the Multiverse of Madness is the sequel to 2016’s Doctor Strange and brings back Benedict Cumberbatch in the titular role. As the title suggests, it deals with the Multiverse and, follows Strange after Spider-Man: No Way Home’s events. Remember the spell he performed on Peter Parker’s request? That has caused a chaos in the multiverse.

All manners of creatures and entities are crossing over into the MCU, including Strange’s evil parallel universe twin we saw in What If…? The trailer also revealed that Sir Patrick Stewart will come back as Professor X from X-Men movies. Elizabeth Olsen’s Wanda may not prove to be such a friend of Strange, after all. Many are also claiming they spotted Tom Cruise as Tony Stark in a brief shot.

Doctor Strange in the Multiverse of Madness releases on May 6, 2022.

Colin Trevorrow directorial Jurassic World: Dominion concludes the Jurassic World trilogy, and brings back Chris Pratt and Bryce Dallas Howard in the roles of Owen Grady and Claire Dearing. However, more exciting is the return of the trio of Sam Neill, Laura Dern and Jeff Goldblum, the stars of the original Steven Spielberg directorial Jurassic Park. While Neill and Dern come back in the roles of palaeontologists Dr Alan Grant and Dr Ellie Sattler, Goldblum is back in the role of chaotician Dr. Ian Malcolm.

With Nope returns Jordan Peele, actor and director of horror films Get Out and Us. Similar to Get Out and Us, we know little about Nope, and this will likely stay that way until the film arrives. The trailer does not do a lot to give us an idea of the plot, which is actually preferable to the usual spoiler-y trailers we get these days.

An intriguing TV spot for Moon Knight shows Oscar Isaac’s torn superhero in action. Created by Jeremy Slater, the series follows Marc Spector, the titular character who is a former Marine and CIA operative. The series looks much darker than what Marvel fans expect, and marks a departure from the sunny, mostly bright heroes that populate the rest of the MCU.

At first glance, The Adam Project looks like your standard sci-fi fare, but that was true for Reynolds and Levy’s Free Guy too, and the film turned out to have surprising depth and many heartfelt moments.

The Adam Project will release on March 11.

Sonic is a cartoony, anthropomorphic blue hedgehog who has escaped his own dimension and has entered ours using magic rings. He befriends a human and together they face off against the evil Doctor Robotnik.

The first film received mostly positive reviews. It holds a 63 per cent rating at review aggregation site Rotten Tomatoes. The critical consensus reads, “Fittingly fleet and frequently fun, Sonic the Hedgehog is a video game-inspired adventure the whole family can enjoy — and a fine excuse for Jim Carrey to tap into the manic energy that launched his career.”