Everything Everywhere All at Once wins at Gotham Awards

Everything Everywhere All at Once made more than $100 million worldwide against a $14 million budget, making it A24′s highest grossing film. 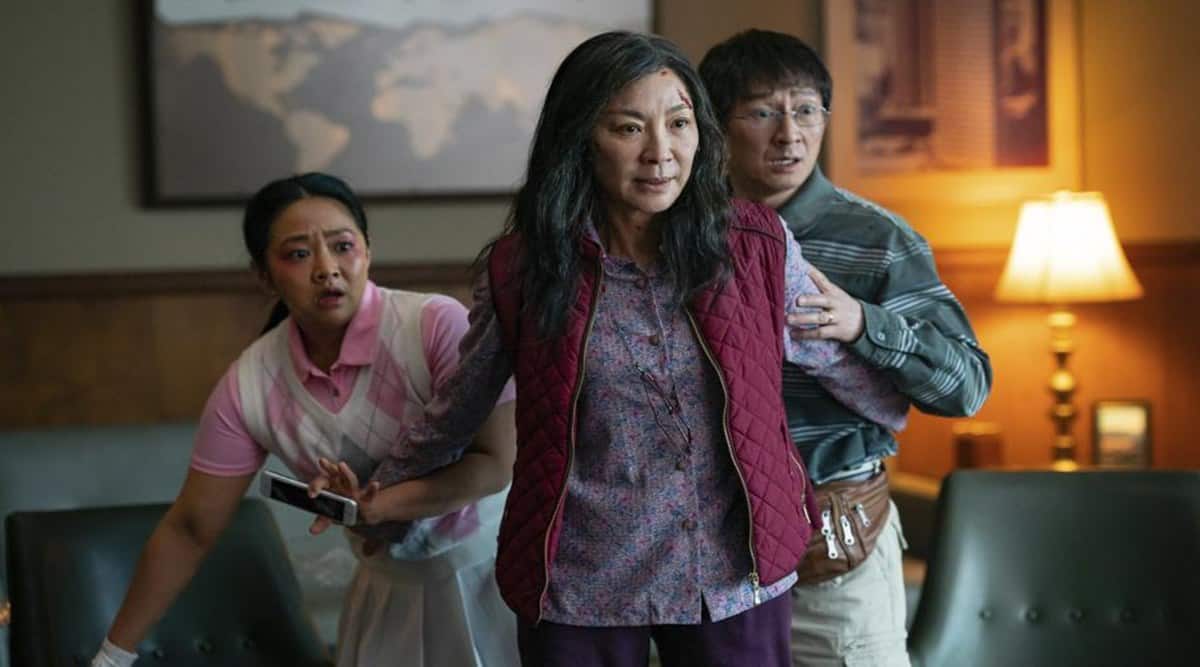 This image released by A24 Films shows, from left, Stephanie Hsu, Michelle Yeoh and Ke Huy Quan in a scene from, Everything Everywhere All At Once. (Allyson Riggs/A24 Films via AP)

Everything Everywhere All at Once won best feature at the 32nd Gotham Awards on Monday, taking one of the first major prizes of Hollywood’s awards season and boosting the Oscar hopes of the anarchic indie hit of the year. Also taking an award for his work on the film was Ke Huy Quan, the Indiana Jones and the Temple of Doom child star who made a much-lauded comeback in Everything Everywhere All at Once and won for best supporting actor.

“This time last year, all I was hoping for was a job,” said an emotional Quan who had nearly given up acting before landing his role in the film. “For the first time in a very long time, I was given a second chance.”

The Gotham Awards, held annually at Cipriani Wall Street, serve as a downtown celebration of independent film and an unofficial kickoff of the long marathon of ceremonies, cocktail parties and campaigning that lead up to the Academy Awards in March. Presented by the Gotham Film & Media Institute, the Gothams last year heaped awards on Maggie Gyllenhaal’s The Lost Daughter while also, with an award for Troy Kotsur, starting CODA on its way to best picture.

But aside from any possible influence, the Gothams are also just a star-studded party that gets the industry back into the awards-season swing. Last year’s ceremony was the first fully in-person award show for many after a largely virtual 2020-2021 pandemic-marred season. This year, the Gothams were held amid mounting concern over the tepid box-office results for many of the top awards contenders. Though moviegoing has recovered much of the ground it lost during the pandemic, adult audiences have inconsistently materialized in theaters this fall.

But in feting Everything Everywhere All at Once, the metaverse-skipping action adventure directed by Daniel Kwan and Daniel Scheiner, the filmmaking duo known as “the Daniels,” the Gothams selected an unlikely runaway success. Released in March, Everything Everywhere All at Once made more than $100 million worldwide against a $14 million budget, making it A24′s highest grossing film. The warm affection for the absurdist film now has it poised to potentially play underdog at the Oscars. The film also recently led nominations to the Film Independent Spirit Awards.

“This movie has been celebrated by the Asian American community, by the immigrant community, by people with weird brains, people who are overwhelmed or sad,” said Scheiner accepting the award with his filmmaking partner. “This award is for you guys. Your stories matter. You matter.”

Also Read |Makers on multiverse scenes in Hollywood’s money-making Everything Everywhere All At Once: ‘Sometimes it looked like subway maps…’| Scene Stealer

While the Gothams are known for exalting the hardscrabble pursuit of lower budget filmmaking, one of its many tribute awards went to another box-office force in Adam Sandler. The 56-year-old actor-comedian, who this year starred in the well-received Netflix basketball drama-comedy Hustle, provided the night’s most raucous speech, after an introduction by Uncut Gems filmmakers Josh and Benny Safdie.

Sandler, explaining that he had been too busy to prepare remarks, claimed his speech was written by his two daughters. His career, as he read, was launched with two guiding principles: “People in prison need movies, too,” and: “TBS needs content.”

The Gotham award, Sandler read, “means a lot to him seeing as most of the awards on his trophy shelf are shaped like popcorn buckets, blimps or fake mini Oscars that say Father of the Year which he sadly purchased himself while wandering in a self-pitying fog through the head shops of Time’s Square.”

The Gothams give gender neutral acting awards, which meant that some awards favorites this year that wouldn’t normally be head-to-head, like Brendan Fraser (The Whale) and Cate Blanchett (Tár), were up against each other. Todd Fields’ Tár, starring Blanchett as a renowned conductor, came into the Gothams with a leading five nominations and went home with an award for Fields’ screenplay.

“Till” star Danielle Deadwyler ultimately prevailed in the crowded lead acting category. Deadwyler, who plays Mamie Till-Bradley in the piercing drama, wasn’t able to attend the ceremony. “Till” director Chinonye Chukwu accepted on her behalf.

Deadwyler’s win should add momentum to her Oscar chances, as should the award for Quan, who is best known as the child star of The Goonies and Temple of Doom.

The breakthrough director award went to Charlotte Wells for Aftersun, the Scottish filmmaker’s tender, devastating debut about a father (Paul Mescal) and daughter (Frankie Corio) on vacation. Aftersun also earned a shoutout from Daniel Kwan who said Aftersun should have won best feature, not Everything Everywhere All at Once.

Steven Spielberg had been scheduled to introduce a tribute award for Michelle Williams, star of Spielberg’s The Fabelmans. Filling in was Williams’ co-star Paul Dano, who said Spielberg tested positive for COVID-19. Williams spent much of her speech reflecting on how instrumental Dawson’s Creek co-star Mary Beth Peil was to her as a young actor. Williams was also visibly stunned by a standing ovation.

“What is happening?” said a wide-eyed Williams. “I shouldn’t even be out of the house. I just had a baby.”

Tribute honorees also included Focus Features’ Peter Kujawski and Jason Cassidy, and a thunderous tribute to the late Sidney Poitier by Jonathan Majors, who announced a new initiative in Poitier’s name to help young filmmakers. “Bravo, Mr. Poitier,” Majors said. “We got your back.”