Devotion movie review: This Jonathan Majors film tries to be many things at once

Devotion movie review: Taking the weight of the film's title a bit too seriously, director JD Dillard puts Ensign Jesse Brown on a pedestal and won't allow him a moment to be entirely human. 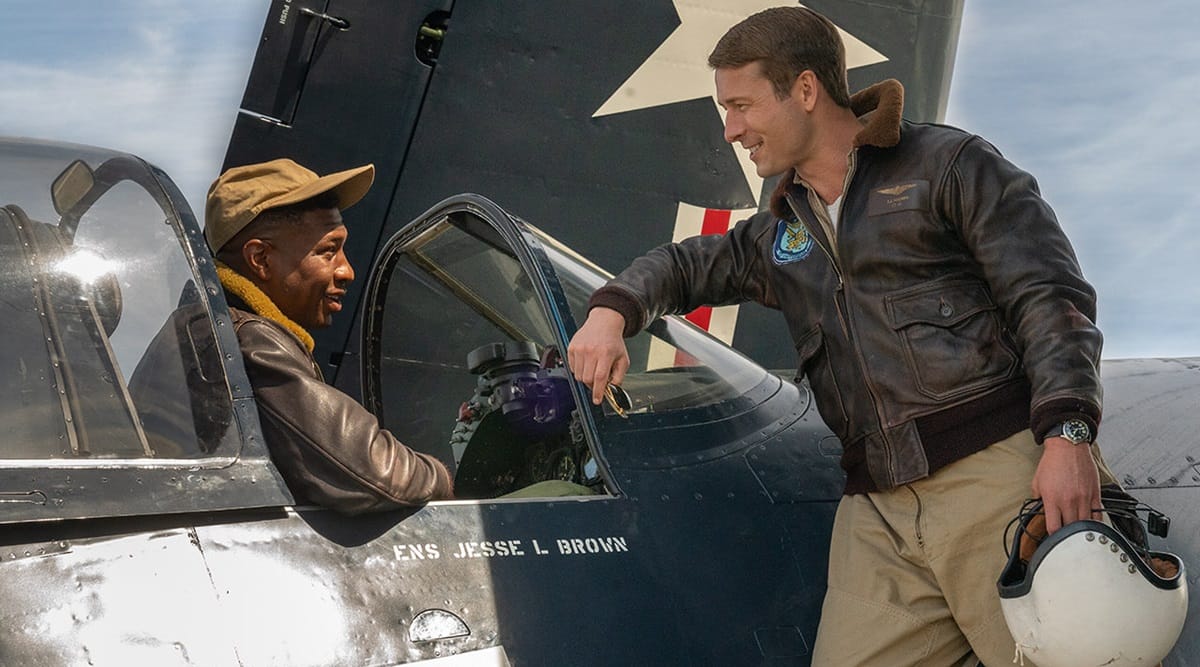 Devotion has hit theatres across India.

As the story of the first African-American to become an aviator in the US Navy, Devotion is trying to be many things at once: the struggles of a coloured man on the ground (it’s the 1950s), the challenges of landing an aircraft on a ship, the technicalities of flying one in the air, matters of the brain, questions of the heart, hate and love, anger and calm, and for one ambitious, but ultimately inconsequential, moment, also about Liz Taylor (yes, the one and only).

Taking the weight of the film’s title a bit too seriously, director Dillard, himself the son of a Naval aviator, puts the aforesaid hero, Ensign Jesse Brown (Majors), on a pedestal and won’t allow him a moment to be entirely human. Even his interactions with his wife Daisy (Jackson) – so devoted to Brown that she seems to move in slow motion around him – are an exchange in quotable quotes. The daughter, a toddler, is not allowed even one single child-like moment.

Nothing, in short, stirs the heroism of Brown hanging over every frame of Devotion. Dillard also opts for a solemn rather than stirring kind of heroism, where the Lieutenant Commander (Sadoski, trying very, very hard to inject a Top Gun-like flippancy into the whole atmosphere) routinely lapses into crisp explanations of the latest on the Communism-as-a-threat front.

As the film’s opening frame itself puts it, this is the ‘Forgotten War’ – or the Korean clash that America rushed into for the sake of the free world etc., which the US citizens placed on the opposite end of the globe and just five years after WWII, could care little about.

The ‘Reds are coming’ is the only cue that this group of naval aviators are given. In a more insightful moment, Lieutenant Tom Hudner (Powell) and a fellow aviator wonder whether they were born “too late, or too early”, to be caught in this middling crisis — all-tension and no-war.

Brown was Hudner’s wingman, with Hudner’s privileged White upbringing putting him as removed as possible from Brown’s sharecropper origins. It is in their truly monumental friendship that the film is at its best. If Majors’s Brown carries the burden of his difficult life on him at all times – as much as he wants to not be seen doing so – could Powell’s Hudner’s constant efforts to grow close to him originate from something deep, like guilt?

In one of the film’s most moving moments, Majors portrays the pain and anger that Brown carries within, by repeating the insults that he has heard all his life, to himself, looking in the mirror, fear and loathing on his face.

It’s in such moments, as in its sad, quiet and poetic end, on a snow-covered field, with shadows moving in at dusk, that Devotion is at its best.

Parineeti Chopra travels in style as she explores London with family; see pics