Rosi doesn’t underline anything. And that makes everything so much more harrowing: the men, women, and children in the boats, becalmed in the sea, being asked that dreaded question via loudhailers: how many in the boat? 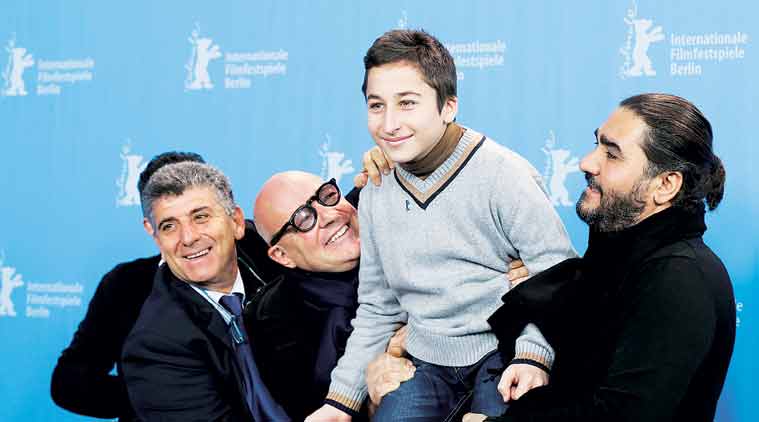 The team for Fire at Sea pose at the 2016 Berlinale Film Festival on Saturday. (Source: AP)

When films depict the biggest tragedies of our time, they become incredibly powerful.

One such film is Gianfranco Rosi’s searing documentary Fire At Sea (original title, Fuocoammare). It takes place on the Mediterranean island of Lampedusa, which has been the beacon for immigrants from Africa, and the Middle East.

Rosi doesn’t underline anything. And that makes everything so much more harrowing: the men, women, and children in the boats, becalmed in the sea, being asked that dreaded question via loudhailers: how many in the boat? Because that question is not a welcoming note. It is a threat.

We see events unfold through the eyes of 12-year-old Samuele, who would rather do anything other than go to school. We see families going about their everyday lives, all done at a pace which seems natural and life-like.

We see old-time inhabitants mentioning the “death” of the unfortunates who couldn’t make it across, talking of how the sea claims its own. For them, it is just something that happens, something that doesn’t really impact their lives.

At a press conference after the screening, Rosi spoke of how the migrant crisis is one of the biggest tragedies playing out on the planet, second only to the Holocaust. He also spoke of how he has tried to make a political film without saying anything overtly political. He doesn’t need to include slogans, or off-putting polemics: the whole film is a political statement.

The “actors” are people who live on the island — the only doctor there who has seen so many dead children and raped, mutilated women that he almost cannot speak on camera. And the little boy, son of a fisherman, who is a witness and a participant: who knows what will happen to him when he grows up? Will he be more aware of the tragedy unfolding on his island? And will that awareness change his life?

The other theme that runs through the selection of the Berlinale competition is captured in L’Avenir (Things to Come): how do you deal with being alone, and loneliness, when the edifice you thought was forever, crumbles right in front of your eyes.

Isabelle Huppert’s unflinching performance holds this film together, as her lead character is assailed by a triple blow: her professional moorings turn shaky, her depressive mother turns more demanding and frail, and her husband walks out on her.

When you are over fifty, and when you ready to become a grandparent, how do deal with infidelity?

Does Nathalie’s background in philosophy (she teaches it, and has written many books on the subject) help her overcome?

L’Avenir is an intensely European film, but it could feel as true anywhere on the planet. Because relationships can squander anywhere, and we just have to learn to deal with things as they are.