Avengers: Endgame wraps up an enormous 22 film saga. In Avengers: Infinity War, the superheroes were defeated by Thanos, who succeeded in his goal to get rid half of the universe’s population. Against all the efforts of nearly every superhero we had seen in the Marvel Cinematic Universe, Thanos committed the biggest genocide anybody has ever known.

The dead half of the universe also included many prominent superheroes like Black Panther, Spider-Man and Doctor Strange among others. In Avengers: Endgame, we will see the (remaining) Avengers coming to terms with this humongous tragedy and take the fight to Thanos. They will also be looking to undo the snap and revive all the living beings who died, including their friends.

It might be the first movie in the Marvel Cinematic Universe in which they will actually prove true to their name and wreak vengeance upon the Mad Titan for the people they lost.

Brie Larson’s Captain Marvel will join the Avengers in the battle against Thanos. She is said to be the most powerful superhero the MCU has ever seen and probably knows more about Thanos than anybody else, excluding Gamora and Nebula. We saw her in action in her standalone movie and even a supervillain like Ronan the Accuser seemed scared of Captain Marvel.

Read all the updates about Avengers: Endgame.

The magical collaboration of AR Rahman and Marvel Cinematic Universe

Avengers: Endgame will now have AR Rahman’s Midas touch to it. The Academy Award-winning musician has composed a Marvel Anthem for Indian fans. The Hindi track was launched on Monday by Avengers: Endgame co-director Joe Russo, who is currently in India to promote the biggest superhero film to date.

Joe Russo thanks the Indian audience for their love and support

During a press conference on Monday in Mumbai, director Joe Russo spoke about the love MCU films receive in India, along with releasing a special theme song, which has been composed by AR Rahman.

Also read | Joe Russo: We insisted for India to be the first stop of Avengers Endgame press tour

When asked which are the characters they find difficult to part with, Joe Russo said, "Captain America has been there since the beginning. He is very special and important."

"The way India responded to Infinity War was overwhelming. It was very touching for me and my brother," said the filmmaker on the country's response to the Marvel movie.

Anthony and I fight over the fate of characters, says Joe Russo

When asked if the Russo brothers are ever at loggerheads regarding the shape of characters in their movies, he said, "Anthony and I fight over the fate of characters. We then arm wrestle (jokes)."

“Robot almost influenced the climatic moments in Avengers: Age of Ultron. In one of the final scenes, all the Ultrons were supposed to form a large Ultron and Avengers were set to fight that but the sequence got cut for time. It was this close. I was inspired directly by Robot,” the MCU filmmaker revealed during a press event in Mumbai.

Talking about action films and Bollywood, Joe Russo said he has watched the Dabangg series. “I’m an action director so I saw Dabangg many years ago and then Dabangg 2. I thought the camera work was great in these films. The tone and energy is also great. So, I certainly know Salman Khan,” he said. 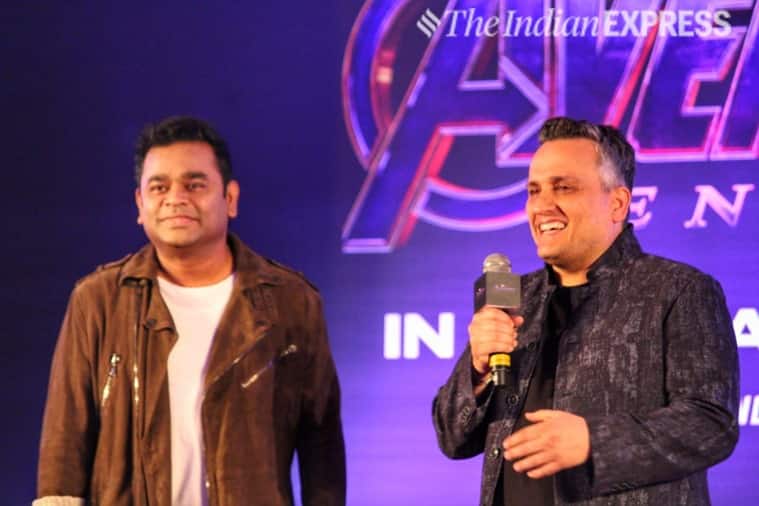 When asked about Indian representation in MCU films, the director said, "I don't run Marvel but I can say that storytelling is becoming diverse. That's the future of Marvel. The reason I am here is because the audience from across the world has reacted to us. I am certain that different cultures will start seeing themselves represented on screen and will start identifying with characters on screen."

After introducing AR Rahman on stage, the filmmaker said that he is overwhelmed with Rahman's composition. "I have goosebumps every time I watch this anthem. The song is in Hindi but goes so well with the emotions in the film," said one-half of the Russo brothers.

Complimenting Rahman on his musicality, the filmmaker said, " The song embodies the film's spirit and when it cannot be conveyed through words, it's done by music, that's why Rahman is a musical genius."

"I wouldn't be standing here without Stanley. His cameo in Endgame is incredible. To have an opportunity to not only work on the material he created but also to work with him was amazing," the Endgame co-director revealed.

The Mozart of Madras has taken the stage. "Thank you Joe for this great opportunity. When I was briefed about the story, it resonated with me. I hope people like what we have created," the musician said.

During a press conference on Monday in Mumbai, Avengers: Endgame filmmaker Joe Russo explained why he is promoting the MCU film in India first. "We insisted for India to be the first stop of our press tour because of the incredible response to Infinity War. We had been wanting to come here for a long time. We have heard so much about India," the director said.

When Tom Holland thought he had leaked Avengers Endgame online

British actor Tom Holland, who plays Spider-Man in the MCU movies currently, revealed in a tweet that he was actually distressed over whether he had accidentally uploaded the highly-anticipated Marvel film on the internet after reading a satirical article about the same. The actor had tweeted, "This actually stressed me out. For a second I was like 'S**t did I?'" Tom is notorious for revealing spoilers to fans about the Marvel movies.

Here's everyone who survived Thanos' snap

Marvel recently released new character posters of Avengers: Endgame and with these posters, the makers have answered many fan questions. The character posters include all the pivotal characters of the Marvel Cinematic Universe. On the posters is written the line Avenge the Fallen, with the ‘a’ in ‘fallen’ written in the style of Avengers’ logo.

The big reveals include Valkyrie and Shuri. Valkyrie, played by Tessa Thompson, was missing in action in Avengers: Infinity War but it left the viewers puzzled as she was on the ship from Asgard after Thor: Ragnarok. We’ll now know of her whereabouts as she has survived Thanos’ snap. Shuri, who was in Wakanda during Thanos’ snap, turned to dust, much like T’Challa and though we did not see it happen on screen, MCU has now confirmed it.

One reason why Thanos isn’t the focus was hinted at by Kevin Feige. He had earlier mentioned that the focus will be on the original Avengers. The film will perhaps serve as a tribute of sorts to them, to give them a perfect send-off. Another reason may be that Marvel has a surprise in store for us. It is unlikely it could top Infinity War, though. The surprise could be an unexpected villain, somebody even stronger than Thanos. Perhaps some cosmic power who was manipulating Thanos. It could be Death or Lord Chaos, both of which are actual Marvel characters. Or perhaps Galactus, a cosmic being who devours entire planets.

This time, it is not just the world that needs saving. This time, it is personal for Avengers. Tony Stark was mentoring Peter Parker and considers himself responsible for his death.

Similarly, Steve Rogers lost his childhood friend Bucky Barnes. Okoye lost her king, the person she had sworn to protect until her last breath. Rocket lost everybody, the entire Guardians of the Galaxy is dead except him. Nebula lost her sister.

Thor must consider himself culpable for the snap, since he could have beheaded Thanos when he had the chance. Instead, he chose to strike him on the chest with his Strombreaker, so that he could gloat. Valkyrie and remaining Asgardians are revealed to be alive, so at least that is something positive for him.

It is being said that Avengers Endgame will focus on the original Avengers, the one who fought off the Chitauri invasion in 2012's The Avengers. So, the film presumably will also double up as a homage to them. It is likely that we will see the last of at least some of them since their contracts with Marvel Studios expires with this movie.