Paul Rudd, Brie Larson and Zoe Saldana came to inaugurate the opening of The New Avengers Campus inside Disney California Adventure at Disneyland. 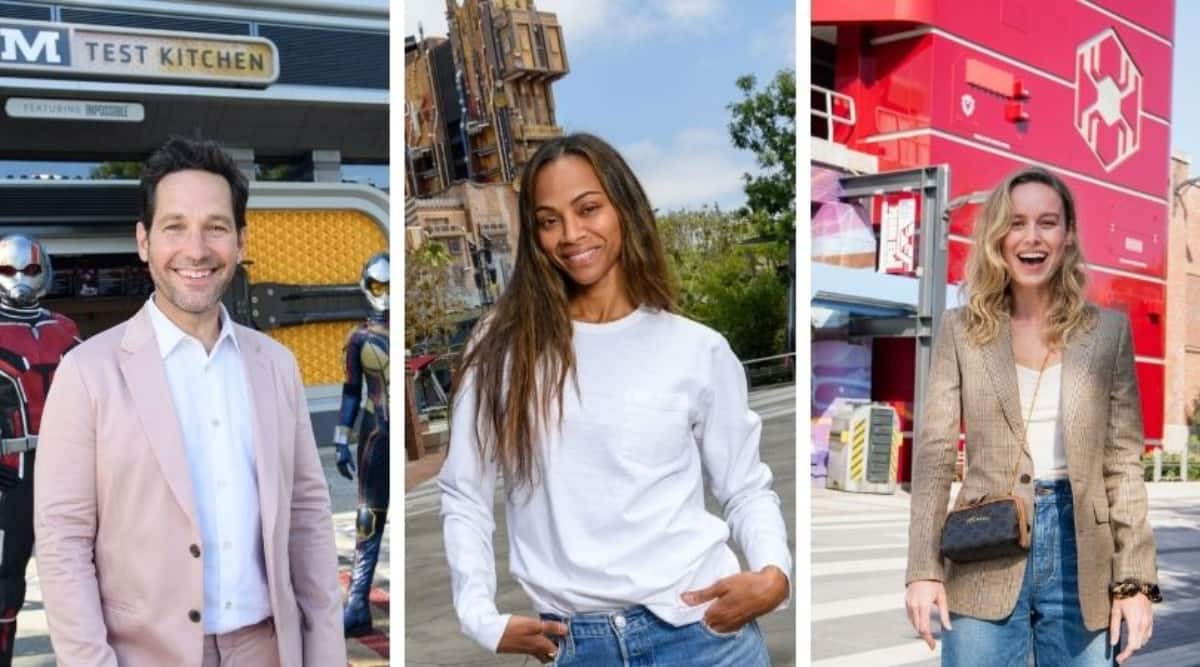 The Avengers have assembled, oh well, most of them. Our Marvel heroes turned up to celebrate the opening of the Avengers Campus inside Disney California Adventure at Disneyland, whose debut had been halted last year owing to the coronavirus pandemic.  The official Twitter handle treated fans to photos of Falcon (Anthony Mackie), Ant Man (Paul Rudd), Captain Marvel (Brie Larson), Gamora (Zoe Saldana), and Jon Favreau, who directed two films in the MCU and plays the role of Happy in the films.

Look who assembled to celebrate the opening of #AvengersCampus inside Disney California Adventure at @Disneyland! (1/2) pic.twitter.com/wSZx11QYNm

In the photos, our heroes posed near eateries and with the staff dressed as Avengers. Paul Rudd stood near ‘Pym Test Kitchen’, while Saldana was near a Vehicle Demo. We got a photo of a shawarma eatery too. Marvel fans would know how important shawarmas are in the world of the Avengers. Happy stood next to an Iron Man, ready to strike.

Look who assembled to celebrate the opening of #AvengersCampus inside Disney California Adventure at @Disneyland! (2/2) pic.twitter.com/EfpQKFYHb6

Fans have flooded the tweets with comments. One even tweeted that takeaway mementos should be taken at every section, and made to look like a comic-book panel, and a booklet where they can be stuck on to form the visitor’s very own comic book. Other fans promised to show up the moment the restrictions ease.

There are a lot of things to look forward at the Avengers Campus, enough so that the Marvel fan’s cup runs over.

For the Spider-Man lovers, there’s a Spider-Man ride that lets visitors blast bots with virtual webs from their bare hands.  ‘Web-Slingers: A Spider-Man Adventure’, combines ride structure with cameras that that capture guests’ body motion and allows them to play Peter Parker. The guests will have to help Spidey fight an outbreak of powerful Spider-bots, that have taken over a building.

Apart from this, they are treated to a show from the royal guard of Wakanda.  In another part of the park, there will be grand music and beats to announce the marching arrival of the Dora Milaje — the royal guard that protects T’Challa in Black Panther. Along with their leader, Okoye,  women of Wakanda will dole out some tough lessons  to wannabe warriors in the audience a lesson in the fighting arts. There’s a moment of levity, as Okoye tells the crowd that she will honor fallen kings and ancestors, the ritual. This is a moment of mourning of those who died during the pandemic, as well as the acknowledgement of Black Panther star Chadwick Boseman, who died from cancer last year, leaving millions of fans devastated.

The new section will also have a Guardians of the Galaxy – Mission: Breakout! a drop-tower ride with funky tunes.

“We’re excited to finally open up the gates and let everybody in,” Scot Drake, a portfolio creative executive with Walt Disney Imagineering, said at the park. “We had 70-plus years of stories and amazing characters to pull from, 23 epic films, and for us it was, ‘What is the best way to get our guests right in the middle of those stories, right in the middle of the action?’”

(With inputs from Associated Press)