This one-man band has music in every finger In a dimly-lit room in a suburban Mumbai home, a slightly built man walks in to applause from several people who have been waiting for him. He straps multiple musical instruments to his body as the room fills with whispers. Then, like an ardent student of music, 24-year-old Gladson Peter starts his performance, playing drums, harmonica, guitar and others, using both his hands, feet and his mouth as the room fills with melodies. The audience start swaying and tapping their feet as this young artist creates music, which is generally associated with a fully fledged band.

Gladson, considered to be India’s first ‘one-man band’, started his musical journey at the age of three when he would make music using spoons, forks or anything else he could lay his hands on. Having graduated to a toy keyboard, which was a birthday gift when he turned four, he started learning to play professional keyboard from his father. 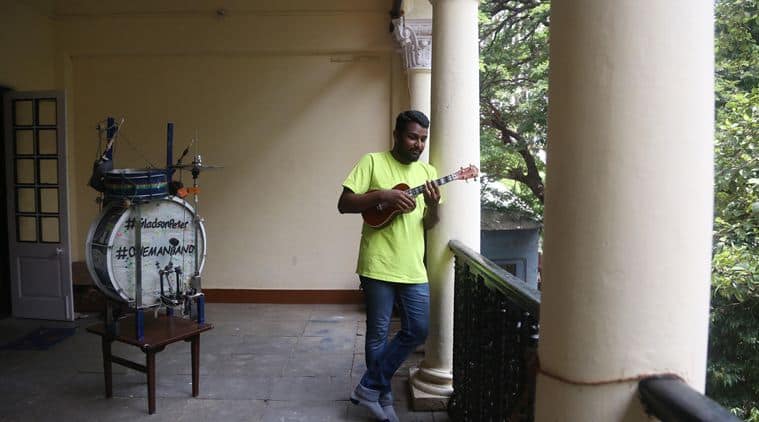 Gladson Peter One Man Band poses for a photograph at his residence. Express Photo by Amit Chakravarty 19-06-17, Mumbai

Over the years, he picked up various other musical instruments, 45 in total, including bongo, conga, drums, ukulele, keyboard, guitar, harmonica, flute and kazoo. “I bought my first flute for Rs 5 and was scared to tell my parents about it,” he says.

Interestingly, he is now trying to build a new set-up to play 22 instruments simultaneously to create a world record. There are only about 30 to 35 people across the globe who play as a ‘one-man band’, majority of them are street musicians. “India does not permit street performances. It is looked down upon,” he says.

Gladson, who works with the Natural Streets for Performing Arts — a non-governmental organisation— performs solo at Metro station on Carter Road and in some parks. He also performs at corporate shows, church events and participates in reality TV shows. Having had the opportunity at a young age to perform in front of a large gathering at a church event, his love for musical instruments grew during school years. In Class VIII, when asked to draw an image of what he would like to become, he drew a sketch of a man playing guitar. But as there was plenty of blank space on the sheet, he drew other instruments he could think of around the man. He says that was perhaps a sign, that he actually craved to to play multiple instruments.

Later, a patch of ill health left him with 60 per cent damage to his lungs and shattered him emotionally. But after he recovered, he took to the ukulele, a Hawaiian string instrument. As his skill with various instruments grew, he began to follow his dream of playing them simultaneously.

Initially, he felt it was possible only on television or on Mickey Mouse episodes where imaginations run wild. But with help form a friend, who is a professional welder, he managed to design and build his multi-instrument set-up and in February 2016 launched his ‘One Man Band’ show. 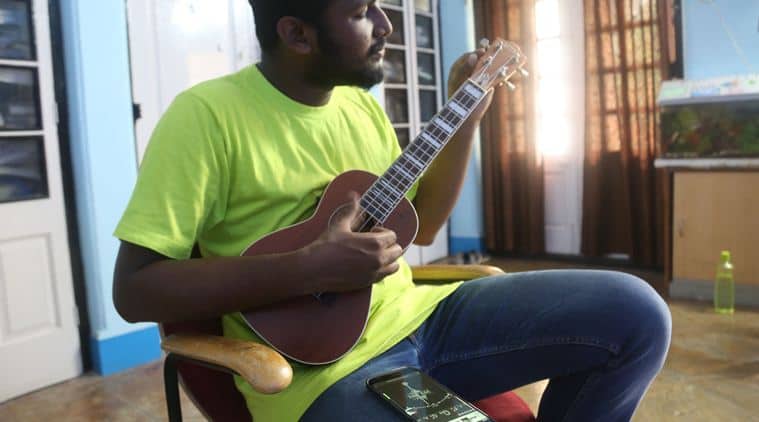 He also writes and composes songs at his studio-home in Byculla. He sometimes jams with other bands. “Many youngsters want to be in music, but I feel they don’t have the support. It’s really difficult in India, unless they are absolute fighters or get a ticket to Bollywood,” Gladson says.

Gladson recalls a funny incident that happened to him. “At a recent performance, a kid came up to me and said he feels sorry for me. When I asked why, the kid said ‘all your band mates left you and so you had to become a one-man-band’,” he says.

Have a comment or suggestion for On The Job? Write to mumbai.newsline@expressindia.com with subject line: On The Job