Anushka Sharma and Virat Kohli hosted a grand reception in Mumbai yesterday night. In the videos from the gala night, the duo can be seen rocking the dance floor with Shah Rukh Khan. 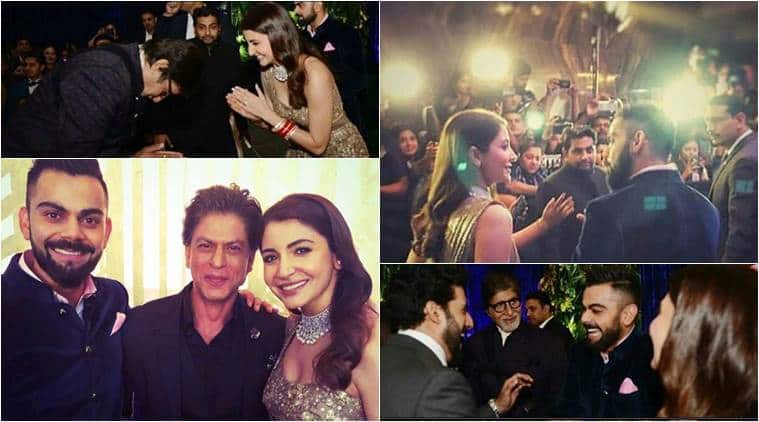 Newlyweds Anushka Sharma and Virat Kohli hosted a grand reception in Mumbai yesterday night. While the who’s who of Bollywood and the cricket industry made the night a memorable one, we are still in awe of the crackling chemistry that our dear Virushka share. In the videos that have surfaced online, the much-in-love couple can be seen matching steps on a number of Punjabi and Bollywood hits.

From the Bachchan clan to Shah Rukh Khan, the gala night had a number of notable Bollywood faces in attendance. While Amitabh Bachchan was accompanied by daughter Shweta Nanda and son Abhishek with wife Aishwarya, Shah Rukh went solo. Among others who were seen at the reception were Karan Johar, Katrina Kaif, Varun Dhawan, Sidharth Malhotra, Kangana Ranaut, Priyanka Chopra and many others. Even yesteryear beauties such as Sridevi Boney Kapoor, Madhuri Dixit and Rekha were in attendance.

But the main star of the show was definitely Anushka’s close friend and Jab Harry Met Sejal co-star Shah Rukh Khan. Not only did Bollywood’s King Khan shake a leg with Virat and Anushka on Bollywood hits like “Chaiyya Chaiyya,” “Kithe Chaliye Tu Morni Banke”, but he also taught the groom a step or two on his own songs like “Pretty Woman.” In another one of the videos that have surfaced online, Shah Rukh is dedicating his popular dialogue from the film Jab Tak Hai Jaan to the happy couple on stage. But SRK, being his witty self, funnily replaces ‘Jab Tak Hai Jaan’ with ‘Jab Tak Hai Khan’ towards the end. And that is what prompts Anushka to plant an adorable kiss on Virat’s cheek. Check out all the action that happened at the reception in the videos below.

#VirushkaReception In Mumbai… #Virushka With Her Dad… At Their Reception.. 😍😍😍😍 pic.twitter.com/MUCdWJjqWq

Anushka Sharma had tied the knot with Indian cricket team captain Virat Kohli in a hush-hush ceremony on December 11 in Tuscany, Italy. The duo had hosted a royal reception in New Delhi for their near and dear ones on December 21. The couple will now travel to South Africa where Virat will start preparing for the upcoming series for two months, which includes three tests, six One Day Internationals (ODIs) and three Twenty20 international matches. Anushka will return in the first week of January to begin the next schedule of Anand L Rai’s film with Shah Rukh Khan in Mumbai. She will also start prepping for Sui Dhaaga starring Varun Dhawan, the shoot schedule of which begins in February.