Uri director Aditya Dhar: I knew Vicky was hungry and wanted to prove himself

Aditya Dhar has made his directorial debut in Bollywood with Uri: The Surgical Strike. In an exclusive chat, he talks about making the war drama on a tight budget, casting Vicky Kaushal and why Uri is not a propaganda film. 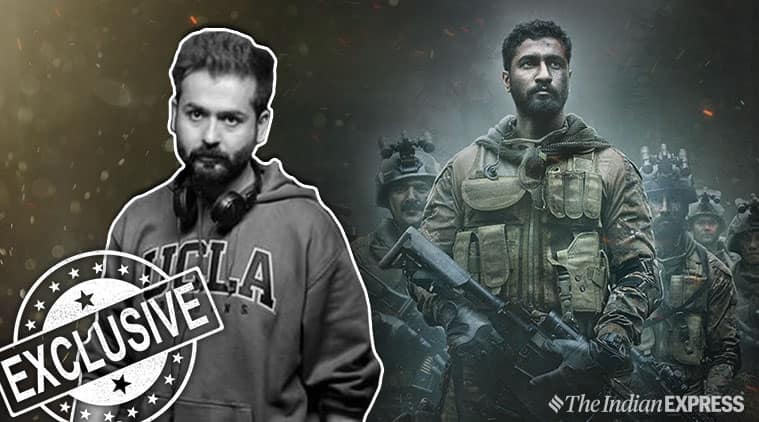 Debutant director Aditya Dhar says his Josh is pretty high right now, seeing the love his film Uri: The Surgical Strike is receiving at the box office. “It’s a brilliant validation for your hard work. I feel blessed to get so much love for my first film. I have given my family and friends something to be happy about,” Aditya said in a candid chat with indianexpress.com, post the film’s release on January 11.

“We don’t see such a reaction in multiplexes. It is there in single screens. In multiplexes, people are mostly quiet. But, this time, they were whistling, clapping and hooting. I think that has happened because, inherently, Indians are very patriotic. They connect with the country, the patriotism. That is something which I feel has worked really well,” he added.

The man behind the war drama, however, credited his team more than anything. “I was just one part of the machinery. When your intention is good, the outcome is definitely good. Everyone came together for that single aim that we have to make this film incredible,” he added.

Uri is based on Indian Army’s surgical strike on terror launch pads across the Line of Control. It stars Vicky Kaushal in the lead role of Major Vihaan Shergill, an officer from India’s Special Forces who leads the strike. Though portions of the film are fictionalised, Aditya shared that he tried to keep it as authentic as possible.

“Considering it is about the Indian Army, our entire energy went into ensuring that we don’t show anything wrong and that it looks as close to reality as possible. I took my time to research a lot, especially the Special Forces. Since people didn’t know about the strike, that made me feel this will keep them interested to know what happened on the ground. It was such a big event, one of the best military operations conducted by the Indian Army,” Aditya said.

Uri also happens to be Vicky’s first solo commercial film. Sharing that the actor was always his first choice, the director said, “I had seen Masaan and was amazed by Vicky’s performance. I told him that I need to do one film with you in my life. Little did I know that my first film itself will be with him. I had three pre-requisites. One, that whoever is playing the lead, needs to be an incredible actor. Two, he needs to completely dedicate himself for 6 months just preparing for the role. With Vicky, I knew he was hungry and he wanted to prove himself. That time, none of his films Love per Square Foot, Raazi, Manmarziyaan had come.”

So was casting a then lesser-known Vicky risky for Aditya? He said, “The risk was never mine. It was of Ronnie (producer Ronnie Screwvala) because he was putting his money on a first-time filmmaker, and believing in someone for a lead role who has never had a solo commercial film. The audience needs a package which was not there with Vicky at that time. Hats off to Ronnie for believing in us!” Aditya Dhar and actor Vicky Kaushal on the sets of Uri.

Commenting on comparisons with Hollywood films like Zero Dark Thirty, Aditya said he was inspired by the film. “Yes, there was an influence, but in a nice way. The whole point is what the Special Forces do in India and what the Green Beret does in the US is not very different. Tactical maneuverability of any Special Forces or holding a gun is all dependant on science which is common across the world,” he explained.

Recalling an interesting behind-the-scenes story, Aditya shared, “We had a really small budget but the idea was we will not compromise on the scale of the film. We had to come up with ingenious, crazy ways to reduce the budget. There are five big action sequences in the film and the incredible thing is that we only had nine stunt people. So those nine were dressed as terrorists in Myanmar, as militants in Uri and in the surgical strike too. We would change their turban, give them scars. They are there in the entire film and nobody can spot them. We had also decided that we would have only one take for every action shot. So, we used to shoot for 12-15 hours a day and then choreograph in our hotel lobby what we needed to do the next day. We were pushing ourselves to the limit.”

Commenting on allegations by some critics that Uri is a propaganda movie releasing just before the 2019 elections, Aditya took a stern stand and said, “In reality, the surgical strikes were sanctioned by the current government. I am showing chronologically what had happened. What is wrong about that? They have done it and we are telling that story. Tomorrow, if you say that there was an incredible story during Indira Gandhi’s tenure, I would love to take it up. I would just tell a great story, that’s my job. Uri is the army’s point of view. I get really riled up when people say anything negative about the army. You are not realising that you are getting to write that message on Twitter because you are safe in your house because of the army. And as per Uri’s release date, that is not decided on the basis that it is an election year. It is decided purely on the economics of the film. My producer had announced the release date way back because January 11 was a clear date and January 15 is Army Day, January 26 is the Republic Day. So we wanted to come in that week where people have that feeling of patriotism.”