Tum Bin was Anubhav Sinha's directorial debut, apart from being the launch-pad of actors Sandali Sinha, Priyanshu Chatterjee, Himanshu Malik and Raqesh Bapat. As it completed 20 years this month, here's looking back at what makes the film memorable. It was a regular night for Anubhav Sinha. He was busy shooting a music video, when T-Series owner Bhushan Kumar called him at 3 in the morning, and asked him to direct a film for his company. This was to be Sinha’s Bollywood debut even though he had directed TV shows and music videos. This offer, however, was different.

“Bhushan Kumar had finished watching one of the music videos which I had delivered to him. He loved it and asked if I would want to make a film. I said that’s what I’ve come to Mumbai for,” Sinha reminiscences.

All Sinha had was one line plot idea – if you saw an accident and the cellphone near the dead body rings, would you answer that? “That was the genesis of the story, with three boys and one girl.”

Tum Bin was a first for most of its cast and crew. While it was Anubhav Sinha’s first directorial venture, it was also Bhushan Kumar’s first production, after he took charge of T-Series post the demise of his father, Gulshan Kumar. Then, the four debutant lead actors – Sandali Sinha, Priyanshu Chatterjee, Himanshu Malik and Raqesh Bapat, who were chosen, some via auditions, and others due to their previous collaboration with Sinha.

Raqesh, who had won Grasim Mr India, was barely 20 when he landed the role of Amar. He told indianexpress.com, that being the youngest one, most of the crew members were apprehensive, apart from Ratnaa Sinha, Anubhav Sinha’s wife. “At the audition, they made me stand with Sandali for 2-3 hours. We were like guinea pigs, being watched,” he recalled.

Sandali, on her part said she is a happy-go-lucky person in real life, but was made to cry at her audition. The scene in question was where Pia is heartbroken and Abhigyan proposes marriage. “I told them, you got no other scene?” Sandali, however said she loved the part because despite being distressed, Pia is a strong girl. “She was a lot like me, with similar mannerisms,” she said. 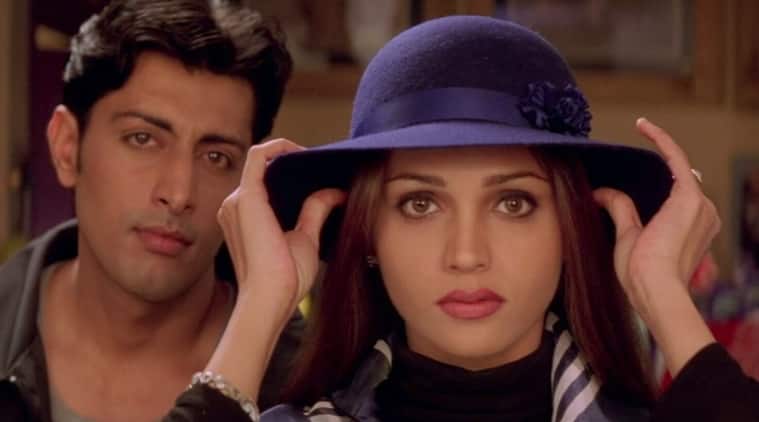 Sandali Sinha and Priyanshu Chatterjee in a still from Tum Bin (2001).

Sinha further shared that they tested several top models with whom he had shot music videos, including John Abraham. “I remember I was entering the audition room, and John was leaving. I asked him how did it go, and he said “very bad!”” But, Sinha was sure of casting Sandali, who, at that time had extra kilos. She promised to get in shape before the film and went on to lose 20 kgs.

Among the boys, Priyanshu had the best audition. “For several days, Priyanshu and Himanshu were playing each other’s parts. But I was seeing Priyanshu more as Shekhar. Priyanshu didn’t mind it as that was a better part, but I took a day to convince Himanshu,” Anubhav Sinha revealed.

Recalling the fan following that then film received, Priyanshu credited it all to Bhushan Kumar and T-Series “for nurturing Tum Bin over a long span of 20 years. And of course, the fans for their undying love towards the film. Salutations.”

Tum Bin is also remembered for its story of love and redemption, apart from its picturesque locations. Sinha, however shared “those standing behind the camera were dying!” Tum Bin was shot at Calgary and the director wanted to keep the backdrop of fall colours of Canada, just when winters were setting in. But, they had no clue about how harsh the weather could be.

“You talk about Tum Bin, and all we remember is cold! One day we shot at -35 degrees.”

But how was Sinha as a film director? Sandali, who was a regular in his videos, said, “He’ll laugh with you, have fun, but when he is working, you better not fool around with him.” Raqesh added, “When you are correct with your scripting, shooting isn’t difficult. Anubhav Sinha had so much clarity. His editing pattern is perfect in his head. So, he shot as much as needed.”

For Himanshu, who was also a regular face in Sinha’s music videos, Tum Bin had passion instilled by its makers. “Even before we shot the first frame, we all knew we were onto something very special. Right from the screenplay to the sound track, every detail of the film was carefully and intensely crafted. The producers backed Anubhav Sinha and he backed his cast and crew,” he said.

Priyanshu agreed. “Tum Bin stands the test of time because love, honesty and wanting to do the correct thing would always remain a relevant theme. Or one hopes so.” According to him the songs continue to aid the films longevity.

He isn’t wrong. Tum Bin’s popularity can be credited to its music to a large extent. In fact, Bhushan Kumar’s top priority was to have a memorable album with eight songs. And it continuing to remain a part of our playlists is testament that a lot of heart went into making its tunes.

Nikhil Kamath, one half of music composer duo Nikhil-Vinay feels, Tum Bin is a project blessed by God. “It started as a fun project. And anything done in harmony and a cordial relationship, becomes successful,” Kamath said.

The first time Anubhav Sinha gave Nikhil-Vinay a narration was at Bhushan Kumar’s house. They discussed 6-7 songs, out of which two got finalised then and there – “Tumhare Siva” and “Choti Choti Raatein”.

“We did not want to follow norms. Though it was a teenage movie, we thought to bring in Jagjit Singh for “Koi Fariyaad.” For “Tum Bin”, we wanted the song a little higher. It would’ve been shrill in Alka Yagnik’s tonal quality. So, we went to Chennai to record it with Chitra ji. She even sang “Pyar Humko Hone Laga.” That decision was taken on the spot. We had a flight to catch, and she dubbed it in one hour,” Kamath said.

Anubhav Sinha got teary eyed when Chitra was recording the title track. He said the deal between him and Bhushan Kumar was, both of them should like the songs. “Bhushan was like a maniac looking for songs and playing it to me,” he recalled. 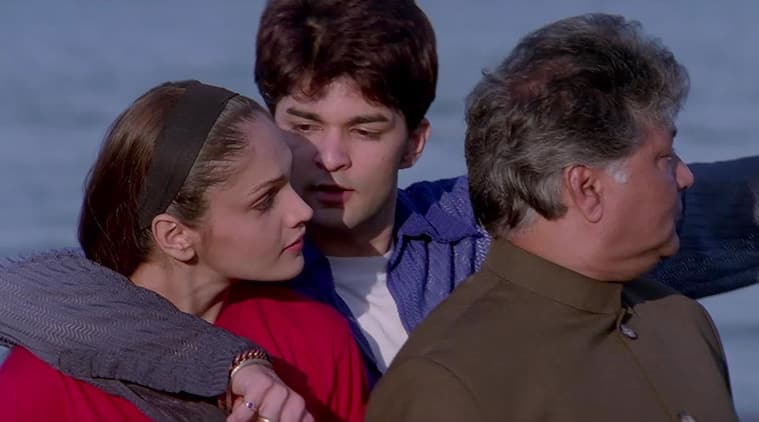 Kamath further revealed that the female version of “Meri Duniya Mein Aake” was created on Anubhav Sinha’s demand. “But, Sonu Nigam had sung it very high. There was nobody who could fit that range. Then someone at T-Series recommended Shailaja Subramanian.”

Raqesh, who was at the recording studio when Jagjit Singh was dubbing the ghazal, shared the surreal moment he had in his first song “Tumhare Siva” when he lip-synced to Udit Narayan’s voice.

“That was such a huge high for me, like a la-la-land kind of a feeling. In fact, one of my girlfriends told me that her first boyfriend used to emulate my polo necks, and their first date had “Tum Bin” song playing. Music was the backbone of the film. There was a happy song, a breakup song, very relatable music. A lot of recovery happened because of the music before the release of the film.”

Sandali laughed while sharing how the shopkeepers change the song at stores to Tum Bin, when she goes to buy something even to this day. Tourists also come to her for a picture when she is holidaying abroad. Some even have “Choti Choti Raatein” playing as ringtone around her. She believes the fandom is only increasing even after two decades.

“Tum Bin has a life of its own. It’s not one person who’s made it. It’s everyone’s labour of love, with so much purity. And we are woven together in time,” she said looking back. Himanshu added, “Tum Bin was a wonderful and rare alignment in the cacophony of Bollywood circa 2001.”

Raqesh agrees too. Sharing an incident from its promotional tour, he said, “We visited a jam-packed theatre at Benaras. People got so hysterical, they started throwing coins at us. They wanted to touch us, broke chairs, followed our cars. At Kanpur railway station, there was no place for us to step out of the train. The back of my shirt was torn. We had to huddle and protect Sandali.”

So what did Anubhav Sinha learned from his first directorial? Giving an honest reply, he told us, “The tragedy is, I learned all the wrong things. After Tum Bin, I thought I knew the formula to make a hit film. And everytime a director thinks that, he delivers a flop. Second thing was, after the film, all the big actors and producers wanted to work with me, they chased me, and I thought that’s what success meant. And everything I put a heart and soul into making Tum Bin – its script and music, took a back seat. It took me 16-17 years to go back to the Tum Bin formula, which was actually of following your heart.”

Sinha also directed Tum Bin 2 (2016), a sequel of the original, which failed to strike a chord with the audience. “After Ra.One (2011), I had lost confidence in myself as a director. It received so much flak, and I take complete blame for it. It took me 5 years to direct again. Bhushan offered me Tum Bin 2. But, I shouldn’t have made its second part, as I don’t think it came from a pure heart. Also, Tum Bin 2 got unlucky because a week before its release, demonetisation was announced. People didn’t have the money to watch it. Even its songs did not hit the right spot. You cannot recreate magic.” The filmmaker’s last three films – Mulk, Thappad and Article 15 have made a lot of noise, but he believes Tum Bin stands tall with them. “These three movies are socio-political intense dramas which, as you said, have created a 2.0 of me, and Tum Bin has outlived my first life as a director.”

Sinha shared that his good friend and fellow filmmaker Hansal Mehta once called him from Mauritius where he was shooting. It was his off day and Hansal Mehta‘s entire cast and crew were drinking and listening to music, when Tum Bin’s title track played and everyone started crying. “This is one of the most overwhelming phone calls I’ve received,” he said.

“It’s your conviction and madness for a film, that transcends through the screen and the audience’s heart,” he concluded. Tum Bin completed 20 years this month.