Sehgal died of cardiac arrest at a hospital in Saket, with her family by her side. 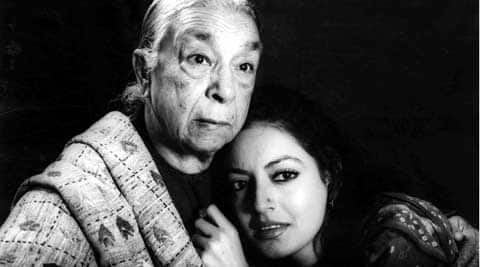 A few years ago, in a packed auditorium in Delhi, a fan stood up and requested Zohra Sehgal, who was sitting on stage, to recite “two lines of Abhi toh main jawan hoon”. “Do line hi kyun?” asked the veteran actor and, in the blink of an eye, launched into a recitation of the entire song, complete with its sensuous accents and its air of mischief and coquetry. By the time she reached the end, the hall was on its feet applauding. Nobody disputed that Sehgal, her face creased with wrinkles, her eyes bright with mischief, and her smile as playful as her spirit, was right when she declared, “Abhi toh main jawan hoon”. How did it matter that she was touching 100 at the time?

On Thursday, Sehgal died of cardiac arrest at a hospital in Saket, with her family by her side. She was 102. She will be cremated Friday. “She was admitted Wednesday and diagnosed with pneumonia. A heart patient, she suffered a cardiac arrest and passed away,” a senior doctor at the hospital said.

“She was unwell for last three-four days,” daughter Kiran said.

“Zohra aapa had a fabulous memory and could recite poetry even when I met her last on her birthday in April,” says actor-director M K Raina, who has made a documentary on the actor with his son Anant Raina, titled Zohra Segal: An Interview 2012. “Once, we had to shoot in Noida at 4 am and she was ready and on location at 2 am, even before I reached. That was her level of professionalism. She would turn up fully prepared at work, having learned her lines and be absolutely ready. When we were dubbing for the film, the sound recordist at Mehboob Studios in Mumbai came and touched her feet because he had never known anybody to get lip sync right in one take,” he adds.

Sehgal’s keen professionalism never faltered throughout an eight-decade-long career that included character roles in countless Hindi and English films, television and plays. She is the old lady with an edge in Cheeni Kum, Dil Se, Veer Zaara, Hum Dil De Chuke Sanam and Bend It Like Beckham among others. Sehgal’s last screen appearance was in Sanjay Leela Bhansali’s Saawariya in 2007. Along the way, she picked up several awards, such as Padma Vibhushan, as well as the popular title of Grand Old Lady of Bollywood.

Like her work, Sehgal’s life was split among various nations. She was born on April 27, 1912 in Saharanpur in Uttar Pradesh in a traditional Muslim family. The third of seven children, she grew up in Chakrata near Dehradun and was sent to Lahore for her higher education. She married scientist, painter and dancer Kameshwar Sehgal in August 1942. The couple had two children, Kiran (who has written her biography: Zohra Sehgal: Fatty) and Pavan. Kameshwar died in 1952 and Zohra raised the children all by herself.

“It is not as well known that she was a great dancer,” says theatre director Anuradha Kapur. Sehgal started dancing for Uday Shankar’s troupe in 1935, has choreographed for theatre and films and performed across Japan, Egypt, Europe and the US.