Nawazuddin Siddiqui starrer Thackeray hit the big screens on January 25 and the audience lined up to see how the versatile actor has portrayed late Shiv Sena supremo Bal Thackeray on celluloid.

The Abhijit Panse directorial created waves ever since the project was first announced. Now only time will tell if the biopic will live up to the hype. In an earlier interview with indianexpress.com, Nawazuddin had said that he doesn’t want to open all his cards prior to the release.

“I felt a lot of pressure, for almost a month. I wasn’t myself, I was very nervous. I was not sure if I would be able to do justice to such a huge personality. However, as time went on and I started preparing for this role, things became easier,” Nawazuddin had earlier told indianexpress.com in an interview.

Thackeray also features Amrita Rao and Sudhir Mishra among others in pivotal roles. The dialogues have been written by Arvind Jagtap and Manoj Yadav with a screenplay by the director himself.

Read all the updates about Nawazuddin Siddiqui starrer Thackeray.

Shubhra Gupta, Indian Express' film critic, in her review, wrote, "Thackeray is a worshipful home video in the guise of a full-length feature film, in which everything is seen solely through the eyes of the man who started life as a testy, outspoken cartoonist, and who, overcome by the ‘unfairness’ of ‘Marathi manoos’ having to deal with migrants in their home-state Maharashtra, went on to form the Shiv Sena, a political party whose ‘reactions against actions’ helped changed the face of nation." 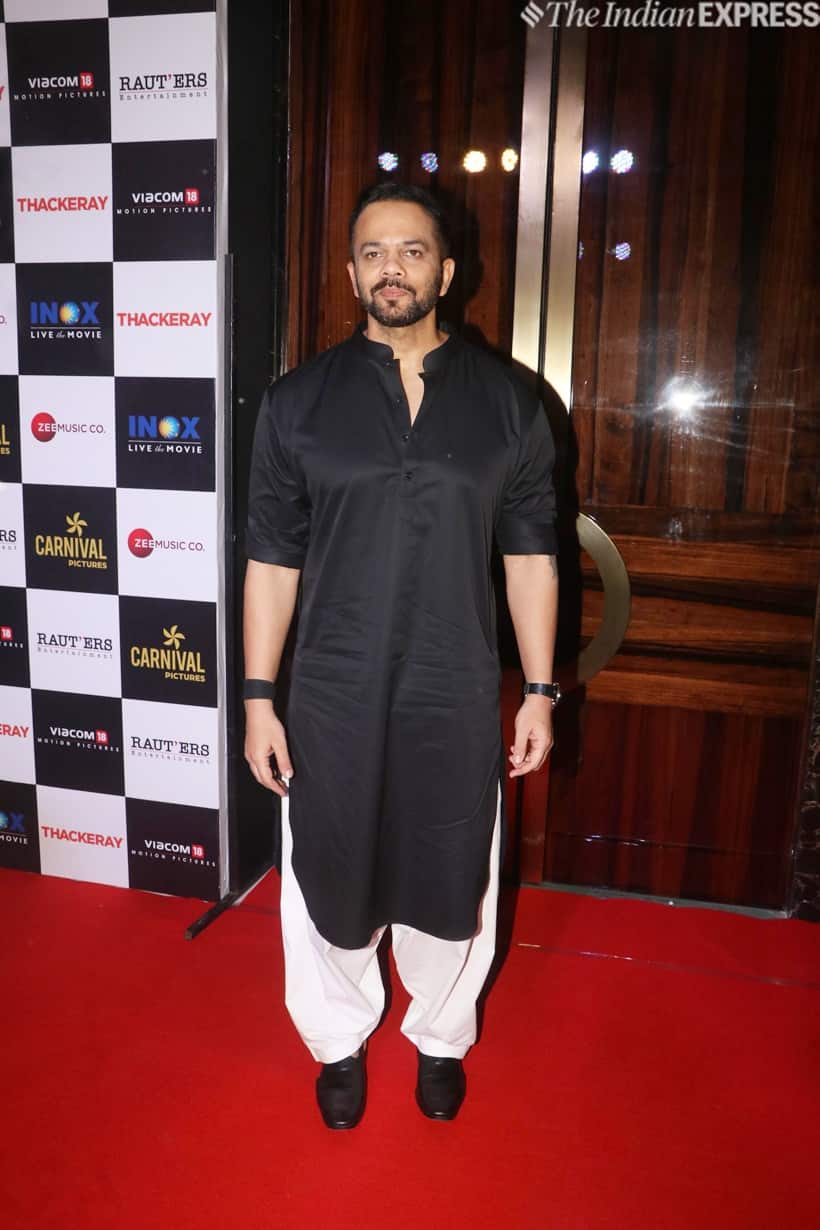 The makers of Thackeray organised a special screening in Mumbai, which was attended by Nawazuddin Siddiqui, Rohit Shetty and Suresh Wadekar among others.

#Maharashtra: Shiv Sena workers created ruckus inside the premises of a movie hall in Navi Mumbai yesterday as it did not display 'Thackeray' movie poster. The movie on Shiv Sena's Bal Thackeray has released today. pic.twitter.com/YwXv3GECUZ

'A fitting tribute to the Supremo'

Mukkabaaz actor Viineet Kumar tweeted, "I want to know the journey of Bala Saheb Thackeray. So i will watch the film #Thackeray .Another important reason for me is @Nawazuddin_S .Finest actor of our time. But I have to wait for sometime because I am shooting in Deoghar, Jharkhand. Congratulations team #ThackerayTheFilm."

When family who have spent their life closely with #MaaSaheb.. look at u after the film and their eyes speak..thats th Biggest Takeaway!!!

Nawazuddin Siddiqui’s casting as Thackeray raised a lot of eyebrows but the actor said he has “full freedom” to pick or reject any role. “Since 1991, I have only thought about becoming an actor day and night. Whenever I get a role like this, I feel happy that some of the hard work that I have done in the past 25 years will be executed. I will do whatever role I want to do. I enjoy doing challenging roles. I like to be pushed outside my comfort zone. Experiment as much as possible, there is only one life to live,” he said.

Are you planning to watch Thackeray? We list some reasons to watch the film:

1. Balasaheb Thackeray
Shiv Sena leader Sanjay Raut has penned the story of the biopic. Hence, Thackeray claims of depicting the lesser-known life of Bal Thackeray, from being a cartoonist working with The Free Press Journal to finding his own political party - the Shiv Sena. While Thackeray holds the position of a patriarch in the Maharashtra politics, the movie aims at telling more about him to viewers across the country.

2. Nawazuddin Siddiqui
Nawazuddin is one of the most sought after actors in Bollywood right now. So if he chooses to play Thackeray onscreen, it has to be something to look out for. From body language to getting his Marathi diction right, Nawaz has put in a lot of hard work for the film. And he did impress in the trailer. After Manto and Sacred Games last year, now he is opening 2019 with a role, which he calls "the most challenging one" of his career." This makes Thackeray, a much-anticipated film, already.

3. Controversies
The Abhijit Panse directorial ran into controversy when many outfits accused it of being a propaganda film on Bal Thackeray. Actor Siddharth also slammed the movie for abusing South Indians. Then there were scenes and dialogues referring to the Babri Masjid demolition, which irked many for hurting religious sentiments. Now, whether or not the film whitewashes the image of Bal Thackeray, or sheds light on even his controversial life, is something to watch out for.

Bhau! Big day for you @Nawazuddin_S can’t wait to catch #Thackeray in the cinemas. 💥

'Nawazuddin Siddiqui is Thackeray to the T'

Film director Kushan Nandy was all praise of Nawazuddin Siddiqui after watching Thackeray. He tweeted, "Can @Nawazuddin_S not do anything? Body language, attitude, performance.. he IS #Thackeray to the T. Specifically loved the scene with Javed Miandad. Riveting watch. #ThackerayTheFilm."

Mumbaikars celebrate the release of #Thackeray

Akshay Kumar shared on Twitter, "Wishing all the very best to my friend, @AUThackeray on the release of the film #Thackeray based on his grandfather...have heard so many stories about the power he exuded and his greatness, looking forward to see it all unfold on the big screen."

Thackeray off to a great start in Mumbai

The 5 am and 7 am shows of Thackeray at Mumbai's Carnival IMAX Wadala were housefull.

'Thackeray explains the mind of Balasahab'

Filmmaker Priya Gupta watched Thackeray and tweeted, ".#Thackeray explains the mind of BalaSahab so powerfully. His feelings for his people, his country & his guts & determination are admirable. @Nawazuddin_S you’re nothing short of a Tiger yourself!!! @AmritaRao was lovely seeing you back on the Big Screen. @AUThackeray". 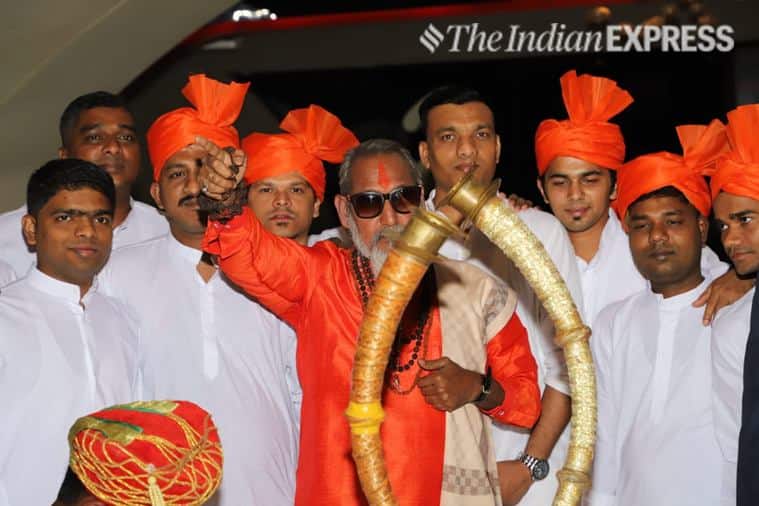 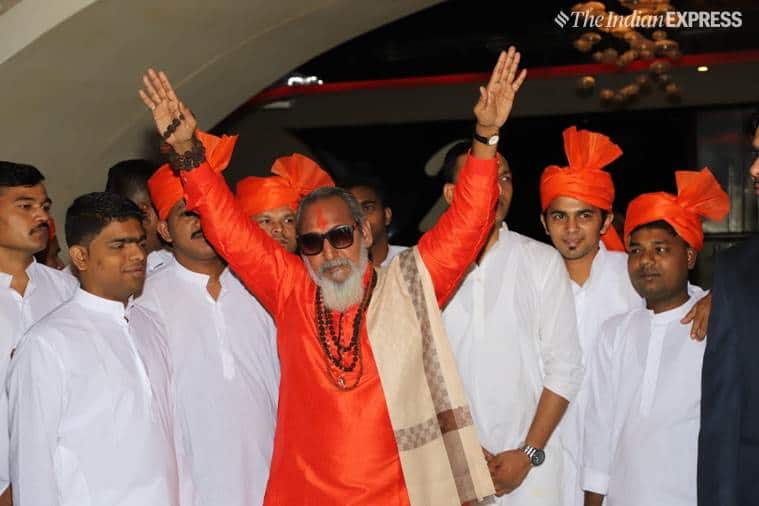 A look-alike of Balasaheb Thackeray was spotted at the early morning show of Thackeray at Carnival Cinemas Imax, Wadala, Mumbai.

After six years, actor Amrita Rao made her comeback to films with Thackeray. Playing the Shiv Sena chief's wife Meena Thackeray, Rao seems to suit her part well. The biopic also stars filmmaker Sudhir Mishra in the role of Mastan. The bilingual biopic has been simultaneously made in Marathi and Hindi.