The Central Bureau of Investigation has registered a case against actor Rhea Chakraborty and others in connection with the death of actor Sushant Singh Rajput.

With CBI taking over Sushant Singh Rajput’s death case last week, the investigation now revolves around the late actor’s former partner Rhea Chakraborty and her family. The CBI has registered a case against Rhea and others.

The case came after Sushant’s father KK Singh lodged an FIR in Patna last month against the actor and her family members alleging abetment of suicide.

Simultaneously, The Enforcement Directorate (ED) summoned Rhea Chakraborty in connection with the money laundering case based on the FIR. So far, Rhea, her brother Showik Chakraborty, Sushant’s flatmate Siddharth Pithani, his former business manager Shruti Modi and sister Mitu Singh have been called for questioning by the ED.

Live Blog
Sooraj Pancholi hopes for a "closure" for Sushant's family, and a CBI investigation It's time CBI took over case and gave justice to Sushant: Daisy Shah 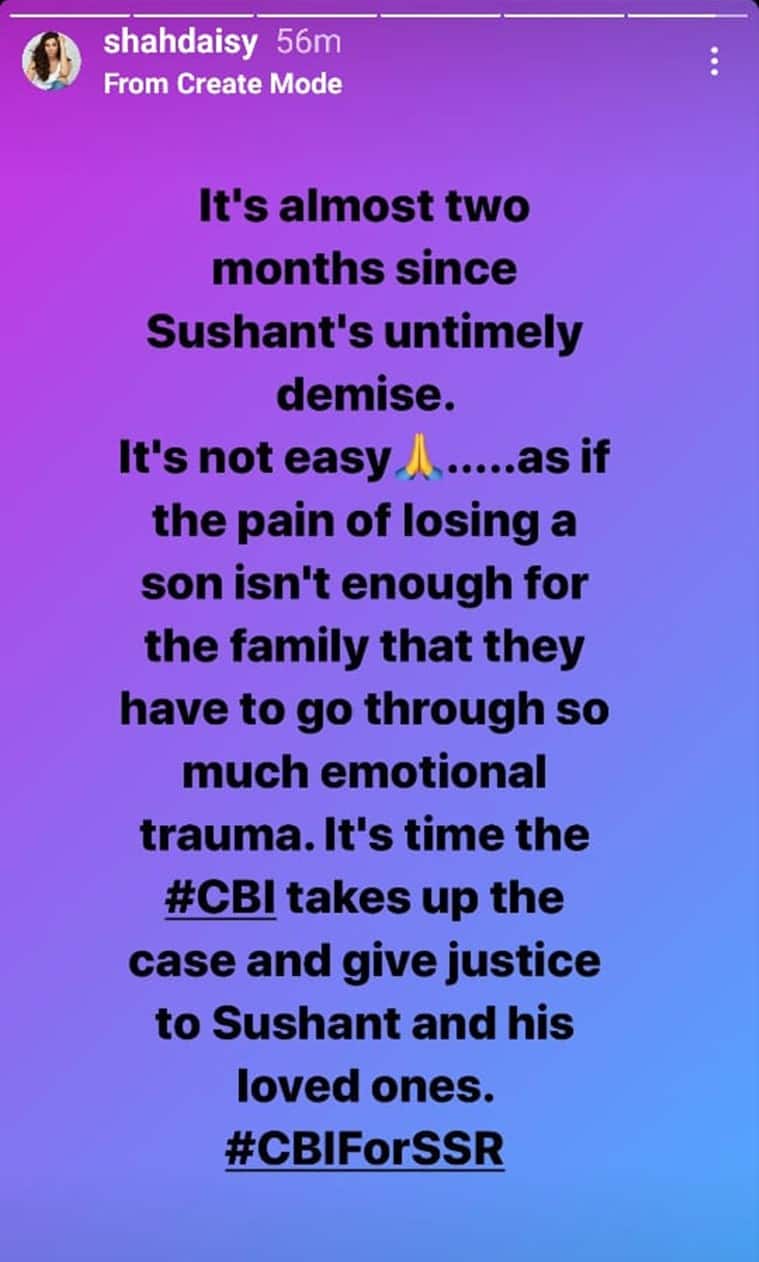 SC should let ED and us continue their investigation, says CBI

Main plea taken in the petition & argued is that most of the transactions took place in Mumbai and accordingly Patna Police has no jurisdiction to investigate the matter, CBI says in its reply filed before SC. Petition misconceived & fit to be dismissed for many reasons, CBI says https://t.co/g5JuH6zO29

Witnesses' statements collected by Maha police have no legal sanctity: Centre to SC

Statements of 56 witnesses said to have been collected by Maharashtra Police in #SushantSinghRajput case “have no validity or legal sanctity” as the state is yet to register an FIR: Centre tells Supreme Court . @IndianExpress Attempt to talk to Sushant on phone was thwarted by accused: Sushant's father to SC

During Sushant Singh Rajput's lifetime, the father's attempt to talk to him on telephone from Patna was thwarted by accused persons. It could have saved his son's life: KK Singh, deceased's father in his reply submitted to Supreme Court. #SushantSinghRajput

SC should comment the case has rightly gone to CBI: Sushant's family lawyer

Since Supreme Court has listened to lengthy arguments in the matter I want that it should comment that the case has rightly gone to CBI. The Court should give directions that Mumbai Police should help CBI in the investigation: Vikas Singh, lawyer of #SushantSinghRajput's father pic.twitter.com/cq1EGUXG0G

The Bihar government, in its written submission in the Supreme Court filed through its lawyer Keshav Mohan, said: "It is apparent that it is on account of political pressure in the State of Maharashtra that neither the FIR has been registered by the Mumbai Police nor did they extend any cooperation to Bihar Police in discharging their obligation to conduct investigation expeditiously."

The submission, settled by senior advocate Mainder Singh, said that nothing further is called for in the present Transfer Petition of Rhea and it deserved to be rejected or disposed of. "In the facts and circumstances of the present case, it is humbly submitted that no impediment would deserve to be allowed to come in the way of CBI to undertake and complete the investigation expeditiously," the Bihar government said.

Mumbai police wants to rush the probe, Sanjay Raut saying they are almost done with the investigation, we deserve to know the truth #CBIForSSR @republic #justiceforSushanthSinghRajput @shwetasinghkirt @anky1912 pic.twitter.com/2SV1AwaFx7

Vinay Tiwari, SP in Bihar, who reached Mumbai on August 2, with advance intimation to Mumbai Police, was virtually kept detained in the name of “quarantine” & not allowed to discharge his duties for the conduct of the investigation: Bihar Govt in its reply before Supreme Court

Actor Sooraj Pancholi and parents of Disha Salian, who had briefly worked with Sushant Singh Rajput, have filed separate complaints with the Mumbai Police against small-time actor Puneet Vashisht, accusing him of posting defamatory content on his Facebook account in light of Disha and Sushant's deaths.

In his complaint filed on Friday, Sooraj has reproduced a June 30 Facebook post of Puneet, in which he has linked the actor to the two suicides that took place in June. In the post, Puneet has mentioned defamatory things about Sooraj, Disha and a few other Bollywood actors.

On July 2, Puneet edited the post and added “forwarded” before it, indicating that it was sent by someone else, said police. The post can still be seen on his account and has been shared multiple times. In his complaint, Sooraj has said in the first week of July, his friends informed him about the post. “Mischievous stories are planted in social media by Mr Puneet Vashisht and larger organised crime syndicate,” it read.

We stand together as a nation for CBI Enquiry! Demanding an unbiased investigation is our right and we expect nothing but the truth to come out. 🙏 #CBIForSSR #Warriors4SSR #justiceforSushanthSinghRajput @PMOIndia @narendramodi @AmitShah pic.twitter.com/5WgkaUQybJ

No impediment would deserve to be allowed to come in CBI's way: Bihar govt

Bihar government, in its written submission in the Supreme Court filed through advocate Keshav Mohan, said, "No impediment would deserve to be allowed to come in the way of CBI to undertake and complete the investigation expeditiously."

Transfer of probe to CBI at behest of Bihar police without jurisdiction: Rhea Chakraborty

In her written submisssion in the Supreme Court in her case, Rhea Chakraborty has said that the transfer of the probe into Sushant Singh Rajput's deaht to CBI at the behest of Bihar police was without jusrisdiction.

The Supreme Court has reserved its verdict in Rhea Chakaraborty's plea for transfer of Patna FIR in Sushant Singh Rajput's case to Mumbai. The court has asked all the involved parties to submit their written notes by August 13.