Surekha Sikri passed away at the age of 75 due to a cardiac arrest on Friday. Bollywood celebs have paid tributes to the three-time National Award winner.

Veteran actor Surekha Sikri passed away at the age of 75 in Mumbai on Friday due to a cardiac arrest. Bollywood celebs paid tributes to the late actor, as they remembered her power-packed performances. Manoj Bajpayee, Sidharth Shukla, Anubhav Sinha and Sushant Singh were among those who remembered Surekha on social media.

Her manager shared with indianexpress.com, “Three-time national award winning actress, Surekha Sikri has passed away following a cardiac arrest earlier this morning at the age of 75. She had been suffering from complications arising from a second brain stroke. She was surrounded by family and her caregivers. The family asks for privacy at this time. Om Sai Ram.”

Surekha first appeared on the silver screen in the 1978 film Kissa Kursi Ka. From there on, she went on to gain acclaim for her roles in films like Govind Nihalani’s Tamas, Shyam Benegal’s Mammo and Sardari Begum. In the 90s, she prominently featured in television shows like Banegi Apni Baat and Just Mohabbat.

It was her time at TV show Balika Vadhu that made her a household name amongst the masses. She played the matriarch named Kalyani Devi who rules with an iron fist but gradually softens up towards the protagonist Anandi.

The 2018 film Badhaai Ho, for which she also won a National Award, had fans applauding her time on the screen. The Amit Sharma film had her playing the role of a woman who comes from an orthodox background but is ready to embrace the new world.

She was last seen in the Netflix anthology Ghost Stories where she starred alongside Janhvi Kapoor in the Zoya Akhtar directorial. Sikri played a bed-ridden patient who is lost in her world.

Surekha Sikri passed away at the age of 75.

'Had the great fortune of working and learning from you'

"RIP Surekha ji #SurekhaSikri ! Had the great fortune of working and learning from you so much in my Theatre days and than watching your superb performances!" Gulshan Grover tweeted.

'She was an institution'

Deputy Chief Minister of Delhi, Manish Sisodia mourned the demise of TV and film actor Surekha Sikri and wrote, "Few actors are as versatile & accomplished as Surekha Sikri ji. She was an institution. Young actors must watch her work. RIP."

"You’ll be remembered as one of our finest… rip #SurekhaSikri Ji…" actor Parambrata shared on Twitter.

'She was the queen of theatre'

Mourning the demise of Surekha Sikri, Anupam Kher shared, "Deeply saddened to know about the sad demise of my senior in #NationalSchoolOfDrama & an actress par excellence #SurekhaSikri !! She was the queen of theatre in Delhi! Watching her perform in the play #LookBackInAnger was an experience I will never forget. Thank you.Folded hands #OmShanti."

' A complete boho. A chiller. Young at heart.'

Ayushmann Khurrana penned an emotional tribute for his Badhaai Ho co-star Surekha Sikri. He remembered how the late actor was more progressive than her on-screen character.

As the industry and her fans bid her a last farewell, her Balika Vadhu co-star remembered their Maa sa and Dadisa, and said that it was nothing short of an honour to have shared the screen with her. Surekha Sikri's Balika Vadhu family Avinash Mukherjee, Annup Soni, Shashank Vyas and Avika Gor spoke about their experiences with Surekha Sikri. READ MORE

Gajraj Rao shared a few behind the scenes photos from the sets of Badhaai Ho and wrote, "Making a film is like travelling in a train, where the journey is a destination in itself. You meet all kinds of co-passengers here. Some open up their tiffins and hearts to you, while some guard their luggage and eye you with suspicion. Badhaai Ho will always be that special train journey which brought me to a new station in life, and I'm truly thankful that we had someone like Surekha ji as the emotional anchor of this ship. She was definitely the youngest at heart on the sets, and had no airs about her stature or endless experience as an actress. Her craft was defined by her years of homework and 'riyaaz' as an actress, combined with a child-like enthusiasm. As all journeys must end eventually, we bid goodbye to Surekha ji today. Thank you, Surekha ji, for all the wisdom and memories you have left us with." 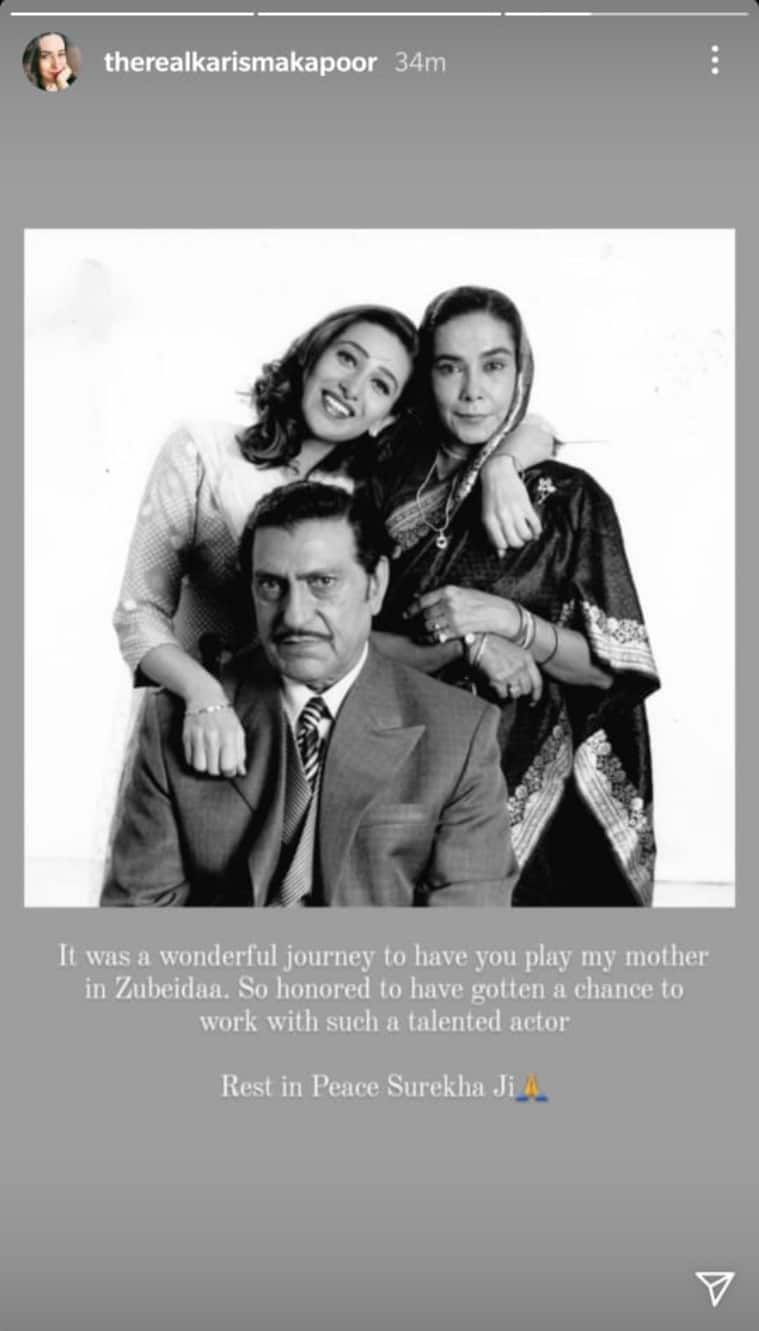 "It was a wonderful journey to have you play my mother in Zubeidaa. So honoured to have gotten a chance to work with such a talented actor. Rest in peace Surekha ji," shared Karisma Kapoor.

'Her exceptional roles will inspire generations'

"Saddened by the passing away of Surekha Sikri ji. Her exceptional roles will inspire the generations to come. My heartfelt condolences to her family and friends," shared actor Manoj Joshi on Twitter.

'What an extraordinary woman'

Dia Mirza shared on Twitter, "There is no one like her. Absolutely no one. What an extraordinary woman. An artist par excellence. Those eyes and that smile Star-struck Her craft will inspire generations of performers. Was lucky to have the chance to witness her magic in person #RIPSurekhaSikri."

Renuka Shahane shared on Twitter, "We've lost one of our absolute best today. She was outstanding every single time she performed. RIP Surekhaji."

'May her brilliance and shine break barriers in the journey ahead'

Nimrat Kaur shared on Twitter, "Such a stalwart, legend, an institution in herself. May her brilliance and shine break barriers in the journey ahead…. Rest in power Surekhaji."

Neena Gupta shared a video on Instagram remembering her Badhaai Ho co-star. Neena recalled that even at his age, Surekha was a glorious actor. She also remembered the time when she was inspired by Surekha's work as a young actor. Neena shared that she used to idolise Surekha Sikri and wanted to perform like her.

Gulshan Grover shared on Twitter, "RIP Surekha ji #SurekhaSikri! Had the great fortune of working and learning from you so much in my Theatre days and than watching your superb performances!" 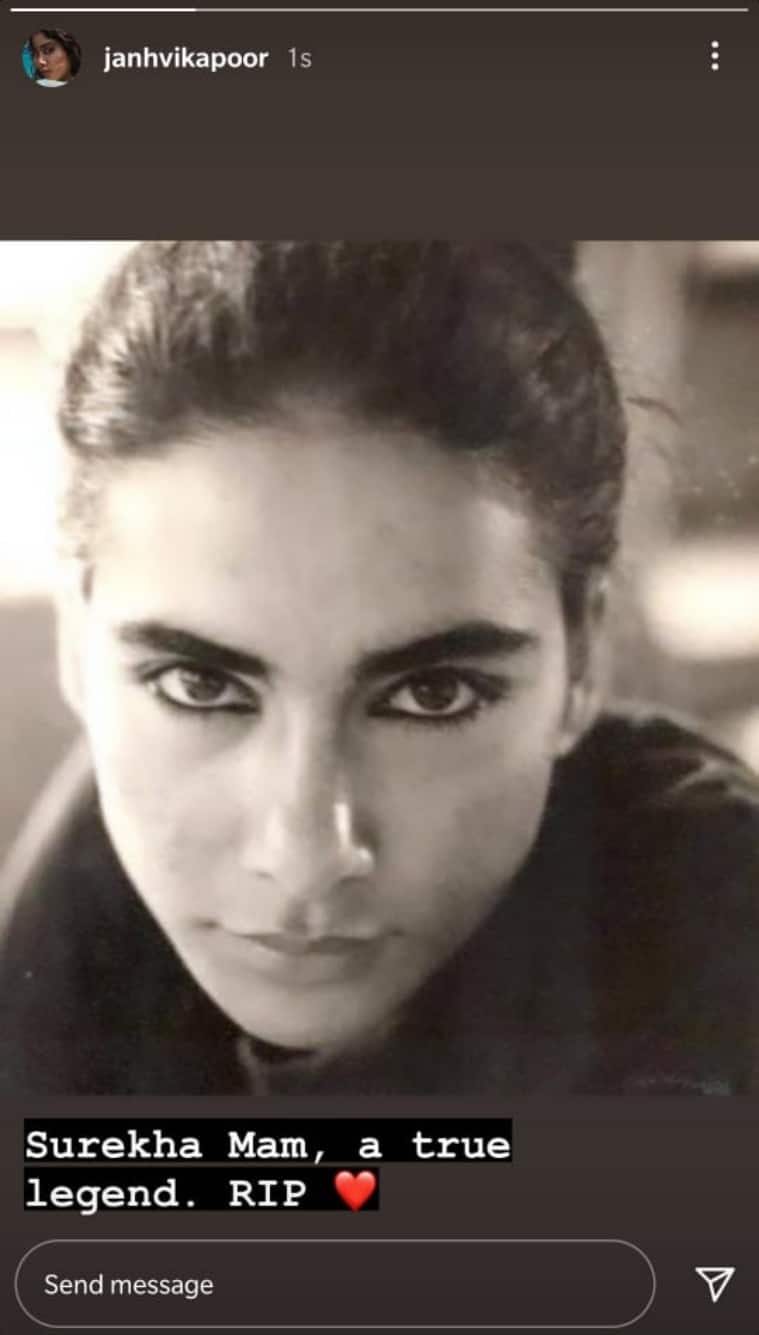 'She was a treat to watch on stage'

"Very Sad news!!! One of the greatest talent Surekha Sikari ji passed away leaving behind so many great performances in theatre and cinema!! She was a treat to watch on stage.can’t forget some of those memories of her act in theatre.great craft and a graceful person!! RIP," shared Rakhi Sawant on Instagram.

With my best buddy on the set...the legendary Surekha Sikri :) pic.twitter.com/1lUozbjBbo

This old photo of Surekha Sikri and Sidharth Shukla has resurfaced online.

Her last National Award was for her role in Amit Sharma's Badhaai Ho. Sikri was in a wheelchair when she collected her award.

Besides these, she won a ton of television awards for her role as Dadisa in Balika Vadhu.