To give a 'nawabi' look to Madhuri Dixit almost three months were spent scouting for fabrics,jewellery.

If at 46 actress Madhuri Dixit still manages to maintain a resplendent look in her comeback vehicle ‘Dedh Ishqiya’ and steal everyone’s heart,costume designer Payal Saluja can rightfully take credit for it.

Saluja worked for months on finer details and piece together the costumes befitting Madhuri,who plays the role of Begum Para in Vishal Bharadwaj’s home production,a comedy-thriller set for release next month.

“I treat script as the Bible…it guides in giving authentic look to characters. We have stayed real to the story and given a nawabi look (to Madhuri) through the costumes,” Saluja told PTI here.

To give a ‘nawabi’ (royal) look to Madhuri,she spent almost three months scouting for various fabrics,jewellery etc in the lanes of Lucknow,Delhi and a few other places.

“I feel lucky to have got an opportunity to work with her in this film. There was no pressure as such but it was definitely a challenge to make her look the way her character was envisioned.”

“As Madhuri plays a begum (a woman having aristocratic lineage) we had to bring that nawabi…royalty feel to her costumes. Every piece was customised for her. She was enthusiastic…energetic to put on every piece (costume). She loved what I had given her to wear every time,” Saluja said.

Madhuri will be seen sporting shararas,anarkali,ghararas,jhoomar (a begum’s trademark) and the necklace in the film,a sequel of 2010 film ‘Ishqiya’.

The film,whose trailer was released last month,will see Shah and Warsi reprising their respective ‘Ishqiya’ roles,while Madhuri and Huma are the new addition. 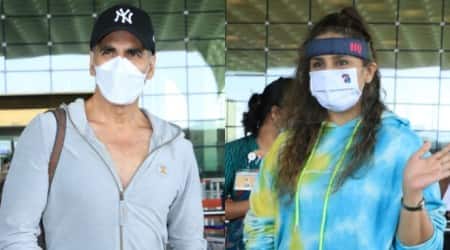