Sooryavanshi will release on March 24.

Sooryavanshi is the fourth film in the film universe.

Sooryavanshi introduces another star cop. The eponymous character is being essayed by Akshay Kumar. Katrina Kaif plays the female lead. Akshay and Katrina have earlier shared screen space in films like Singh is King, De Dana Dan, Welcome and Namaste London among more.

Sooryavanshi will hit screens on March 24.

Vivek Agnihotri is impressed with the trailer of Sooryavanshi.

Akshay Kumar on why there are less multi-hero projects nowadays

"We both (Ajay and him) have always worked in multi-starrers. This should be asked to Ranveer Singh who is new. Ask him why he doesn't do multi-starrers," says Akshay Kumar.

Ranveer Singh replied, "I have done multi-hero projects since the beginning of my career, with Gunday, Dil Dhadkane Do, and now I am doing Takht with Vicky (Kaushal). I am not the right person for this."

"It is a very serious issue, and a lot of people are talking about it. The best thing right now for all of us would be to stay silent. Our officials, the government and our people are there. To talk about what's happening there is easy while laughing and doing the event here, so the best thing right now for entire India should be to stay silent. Everyone's been saying, and the chaos is only increasing. If we stay silent, things will fall in place. There is a CM and others are there. Has anyone seen riots? You will be petrified. I can give a lecture and people will pat my back, but right now we all should stay silent about this for a few days. Let things sort out and then we all can speak," says Rohit Shetty.

"Akshay and I are here together so we both want to tell fan clubs that please don't fight among yourselves. We see that our fans fight with each other. So, we want to say that we both have always supported each other and we have made this film with a lot of love. So, you all also please go and watch this film with each other," says Ajay Devgn.

In case you have missed the trailer of Sooryavanshi
I feel incredibly blessed: Ranveer Singh

"During Simmba, there was a combined scene of Ajay and me. It was a huge moment for me. When I checked that scene in the monitor, Rohit sir knew I was having a moment. Today, I am starring with Akshay sir, and I feel incredibly blessed," says Ranveer Singh.

"It feels good when I get an opportunity to wear the police uniform. Uniform always has a lot of dignity. And I consider myself lucky. We all are lucky to get opportunities where we play such great roles," says Akshay Kumar.

We have consulted a lot of real-life cops: Rohit Shetty

"We have consulted a lot of real-life cops. Now this franchise has become about cops. So, we don't have to say anything. We just have to tell them we want to shoot and they readily give us permission," says Rohit Shetty.

"I was stunned that Katrina has done such a fabulous work in the film. I have become a huge fan of her," Akshay Kumar complimented friend and co-star Katrina Kaif.

"This man is a bonafide star. I think it takes a certain kind of ability to create this kind of universe. I really believe that I have so much to learn from him and all these people," Karan Johar said.

Akshay on collaborating with Ajay

I have made 135 films and for the first time I am watching such a huge crowd. Rohit has made a fabulous movie. I hope the audience will like it. Ajay and I started our careers together and we have reached here, where we have done so many films together," said Akshay.

Ranveer Singh on working with Ajay and Akshay

"I am too excited. I don't know whether I am excited about sharing screen space with my idols or reuniting with Rohit sir. I am as excited as the audience," said Ranveer Singh.

"I loved the trailer...Fab trailer. This is for the first time I'm watching it. I don't think I initially thought it would turn into this huge franchise," said Ajay Devgn.

"There is palpable excitement in the room. I don't think in my years of producing and making films I have seen so much energy for the release of a trailer and justifiably so, because this is a universe which Hindi cinema hasn't seen. This is the first time that Indian cinema has a universe like this where you have the coalition of three mega movie stars," producer Karan Johar said.

The makers of Sooryavanshi launched the trailer of the film, which stars Akshay Kumar and Katrina Kaif in the lead role.

Sooryavanshi team strikes a pose together! 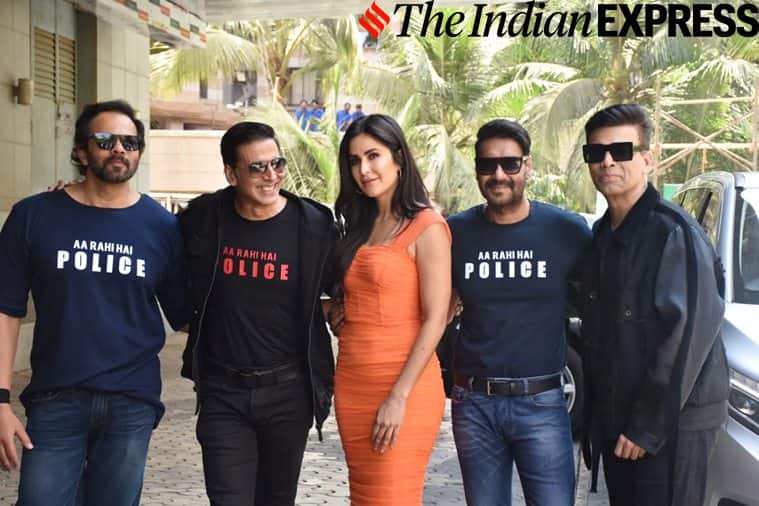 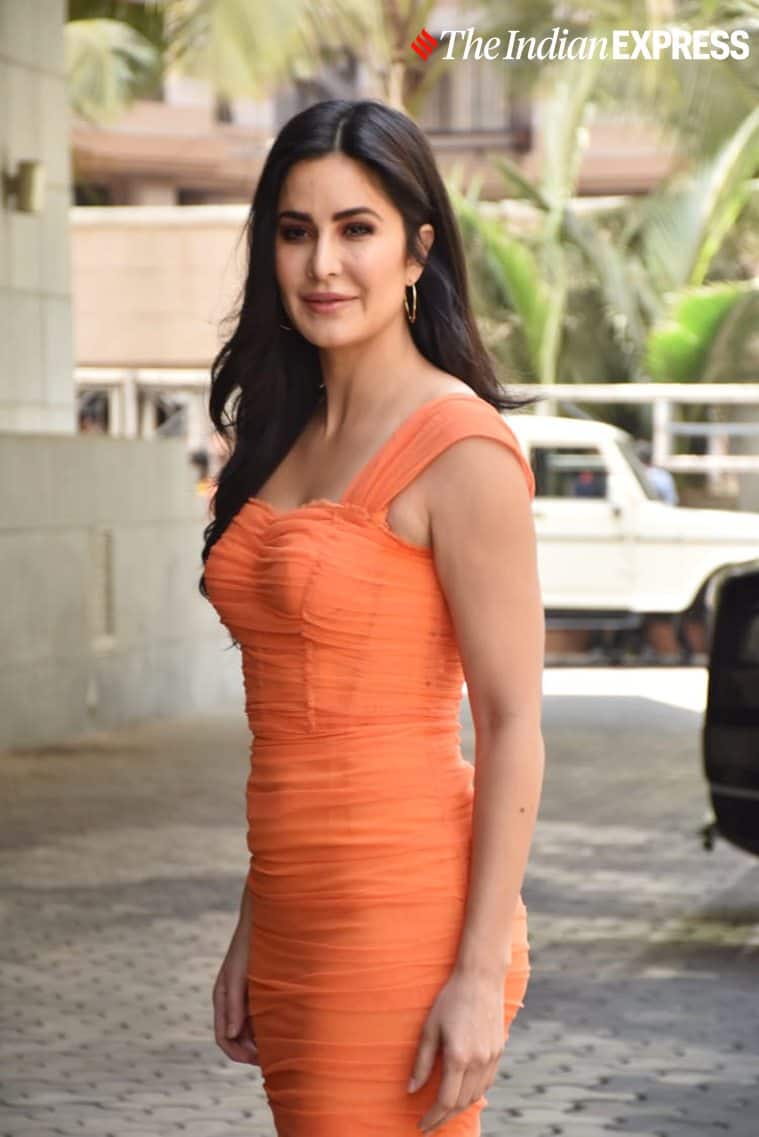 Singham aka Ajay Devgn is here! 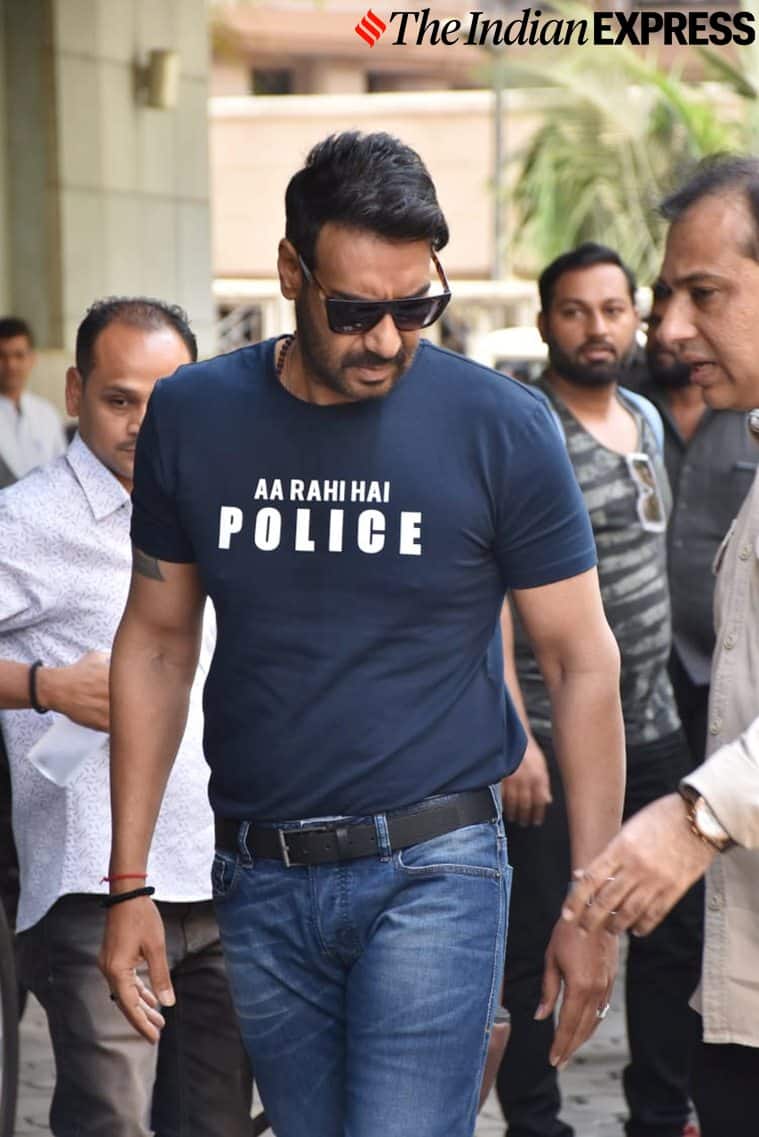 Ajay Devgn has come to support his friend and director Rohit Shetty's upcoming film Sooryavanshi, which is an extension of Shetty's cop-dramas. (Photo: Varinder Chawla)

On February 24, the film's release date was announced: March 24. It was also revealed that from March 24 onwards, Mumbai theatres will be open 24x7.

Akshay Kumar had earlier posted a video featuring the “indomitable trio of the Rohit Shetty Universe” – Ranveer Singh’s Simmba, Ajay Devgn’s Singham and his own Sooryavanshi. He said in a statement, "What a moment in cinematic history in India. To be the first to present our film Sooryavanshi at what is now called 24×7 Mumbai is just the best way any film fanatic can spend Gudi Padwa. I wish this initiative was around when I was young. I wouldn’t have bunked school so much.”