Sonakshi Sinha flaunts huge ring in cryptic posts, fans ask ‘is it a promotional gimmick or are you engaged?’

Sonakshi Sinha shared the post with the caption, "BIG day for me!!! One of my biggest dreams is coming truuuue… and I cant wait to share it with YOUUUU. Cant believe it was SO EZI!!!!" 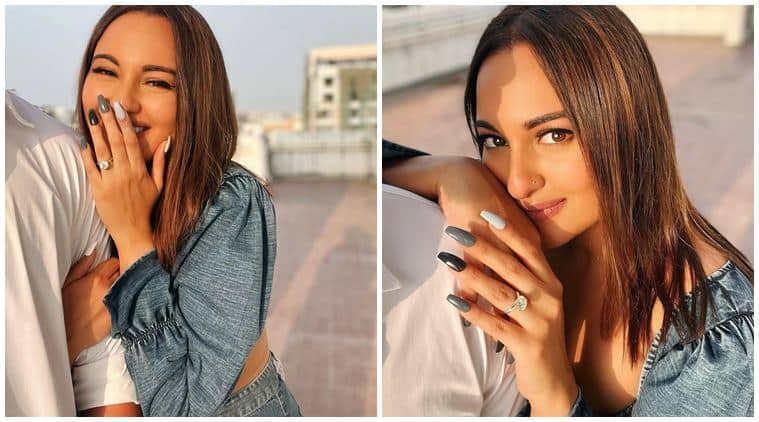 Sonakshi Sinha shared a series of photos on her Instagram account on Monday morning, which has left many from the industry wondering if the actor has just announced her engagement. The fans, however, are far from convinced.

Sonakshi shared not one but three pictures when she can be seen flaunting a huge diamond ring. The pictures have a man posing along with Sonakshi but is cropped from the frame. As per sources, it is a promotional campaign for a jewellery brand.

Sharing the photos, Sona wrote, “BIG day for me!!! One of my biggest dreams is coming truuuue… and i cant wait to share it with YOUUUU 🫵🏼.” The actor also wrote, “Cant believe it was SO EZI!!!! ❤️❤️❤️.”

Many have congratulated Sonakshi on her post. Neha Dhupia wrote in the comments section, “❤️❤️❤️🔥🔥🔥 … congratulations Sona @aslisona,” while newlywed Shibani Dandekar-Akhtar posted, “Congrats Sona so much love ❤️.” Fans, however, believed that it was a publicity campaign. “Not buying it, seems like there’s more to this,” wrote one while another said, “Publicity gimmick, pakka.”

Sonakshi Sinha was in news recently as speculation suggested that she’s dating Notebook actor Zaheer Iqbal. Reacting to the rumours, Zaheer said, “Now it has been so long, I don’t even care. I am like okay if you think, then you think. Keep thinking. It’s good for you. If it makes you happy that I am with her, then it is good for you. Then if it makes you upset, I am sorry. Stop thinking about that.”

See photos of Sonakshi Sinha and her rumoured boyfriend and actor Zaheer Iqbal:

He also shared the advice Salman Khan gave him. “But it is a part and parcel of this industry. I knew it way before I joined the industry. I knew that actors go through this because I have a few friends who are a part of this industry. Bhai (Salman) has always told us that aisa bohot log likhenge [people will write], don’t pay too much attention to it. So, I really don’t pay attention to that,” shared Zaheer.

On the work front, Sonakshi Sinha and Zaheer Iqbal will be next seen in the film Double XL which also stars Huma Qureshi.

From Amphan to Asani: How and why are cyclones named?