Shahid Kapoor’s wedding to Delhi-based girl Mira Rajput is the most talked-about event of the year. 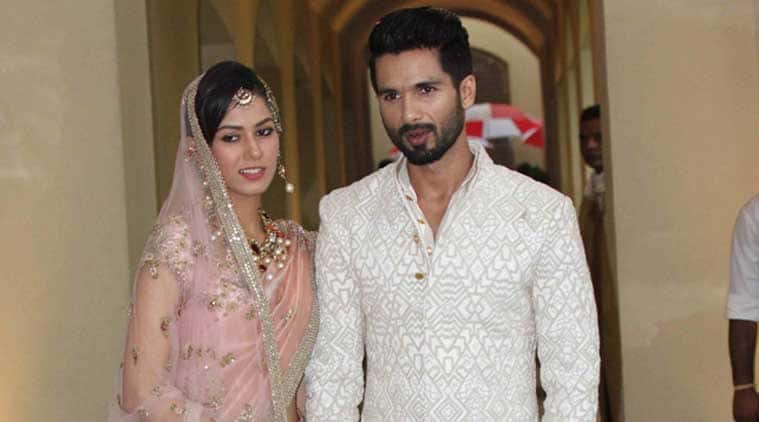 Though Shahid Kapoor and Mira Rajput have already tied the knot, the celebrations are from over, as the party now carries on in Mumbai.

Bollywood actor Shahid Kapoor’s wedding to Delhi-based girl Mira Rajput is the most talked-about event of the year. With a million hearts breaking, the Twitterati raking up a storm and B-Town pouring out their congratulatory wishes, the couple’s big fat wedding has definitely been a fairytale dream. Though Shahid and Mira have already tied the knot, the celebrations are from over, as the party now carries on in Mumbai. We bring you the whole wedding story.

Shahid Kapoor and Mira Rajput will be hosting a grand reception in Mumbai on July 12, which is expected to be attended by Bollywood’s crème de la crème. The reception invitation card has been designed by Delhi-based designer Ravish Kapoor and is a beautiful midnight blue with an elegant chrome plate inside, containing the details. 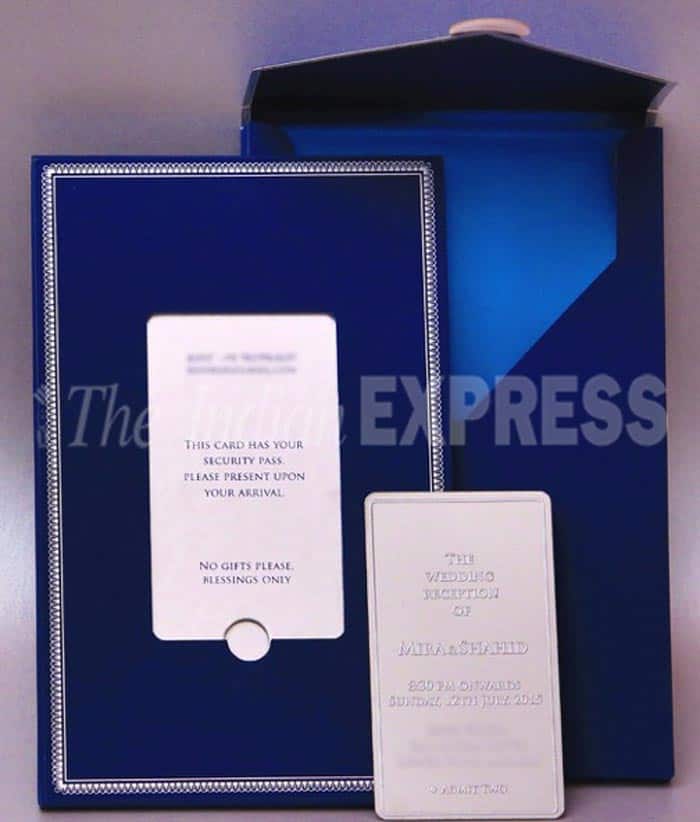 The plate is removable and also works as a security pass for guests to carry to the reception.

Newlyweds Shahid and Mira arrived in Mumbai, the very next evening (July 8) after the wedding. Walking hand-in-hand and complementing each other in black and white, the couple created quite a stir at the airport. Mira was pretty in a Masaba suit. 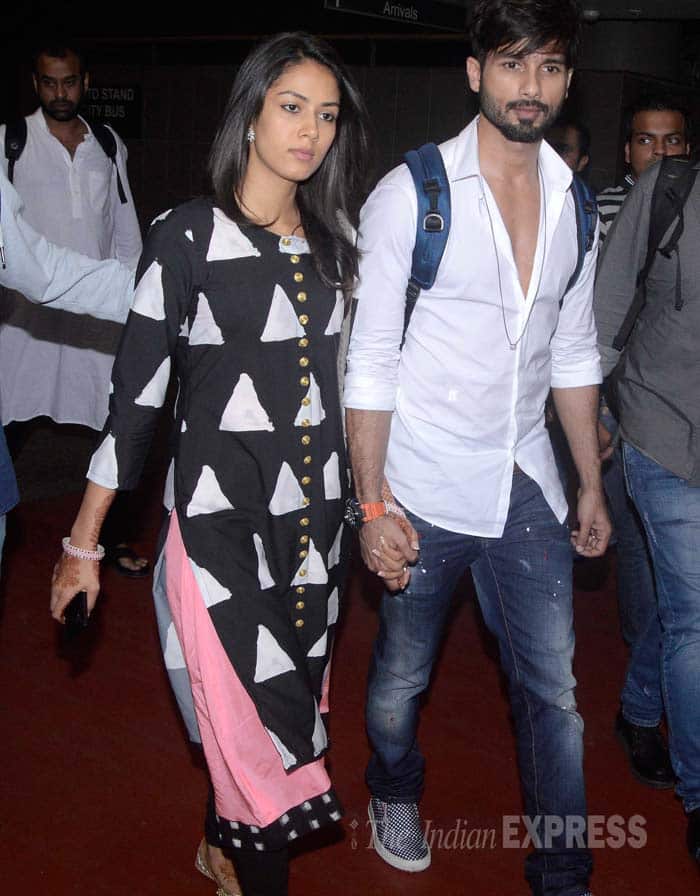 Shahid Kapoor then drove his bride to their newly constructed Juhu residence where they posed for pictures. 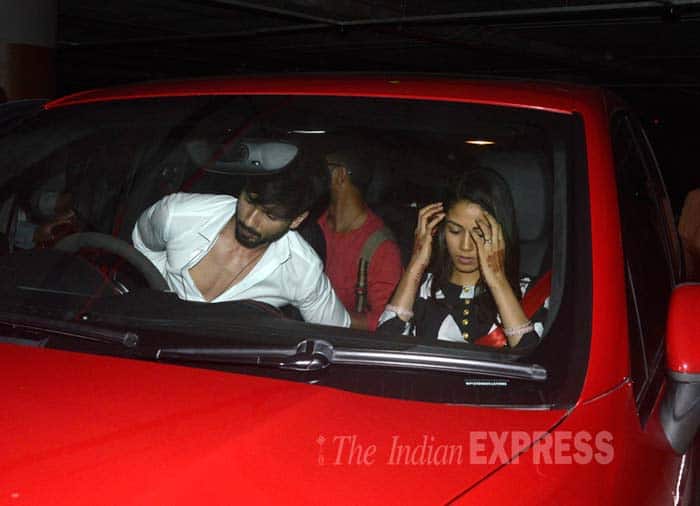 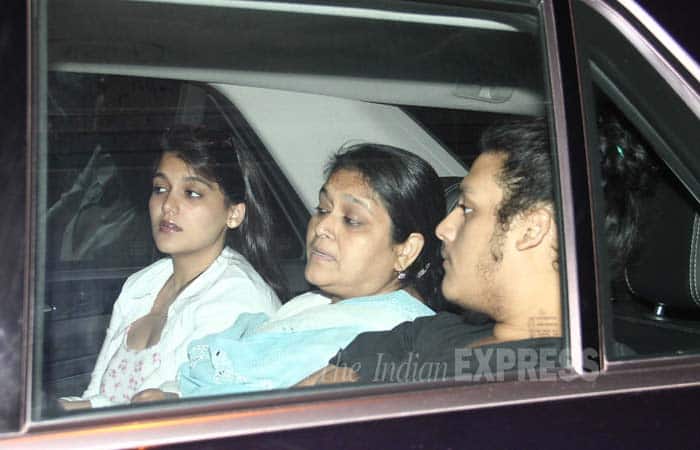 On July 9, in a sweet gesture, Shahid Kapoor tweeted his thanks to his fans and members from the film industry for their warm wedding wishes.

Thank you to each and every one of you for your wishes . Means a lot . :)

While Shahid Kapoor’s family and friends are thrilled that the actor has finally found a beautiful bride in Mira Rajput, most happy of course is Shahid’s family. His father, actor and filmmaker, Pankaj Kapur spoke to the media, expressing his joy. “We are very happy. Our daughter-in-law is very beautiful. It is a celebration time for our family,” said the proud father. 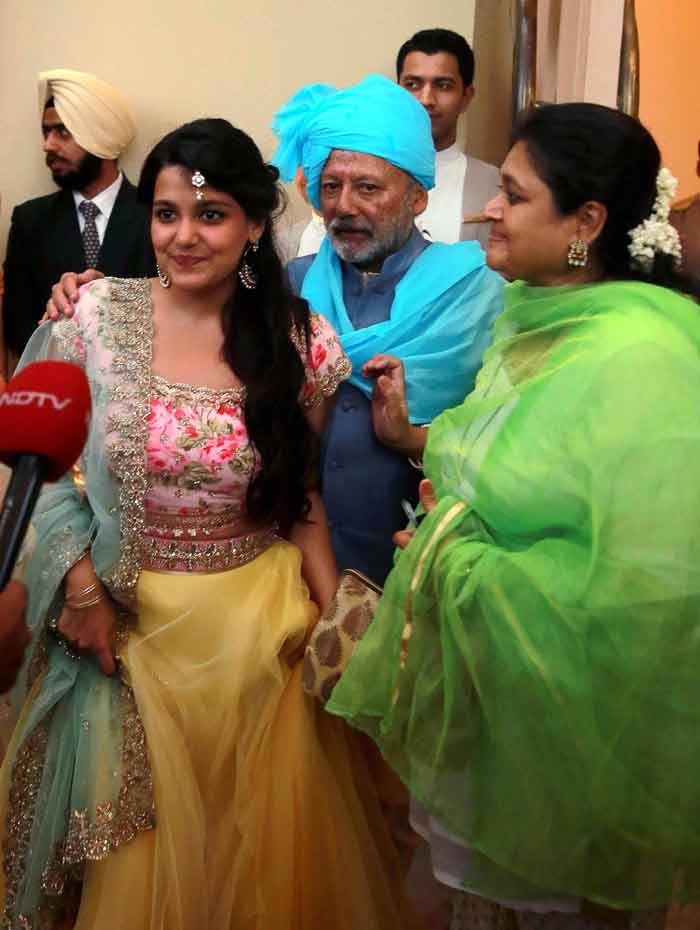 Shahid and Mira tied the knot in a low-key gurudwara wedding on July 7, at a friend’s farmhouse on the outskirts of Delhi. The ceremony was said to be attended by around 40 guests including close family and friends. For the exchange of vows, Mira Rajput kept it simple in a pink and green churridar suit with a heavily embellished dupatta over her head with maang tika. Shahid on the other hand, wore a white kurta pyjama with an orange turban. Post the wedding rituals, Shahid and Mira posed hand-in-hand for photogs outside the reception venue – The Oberoi, Gurgaon. Mira made a beautiful bride in a delicate rose-hued Anamika Khanna lehenga with just the right amount of shimmer and shine that complimented Shahid’s cream-white sherwani suit. 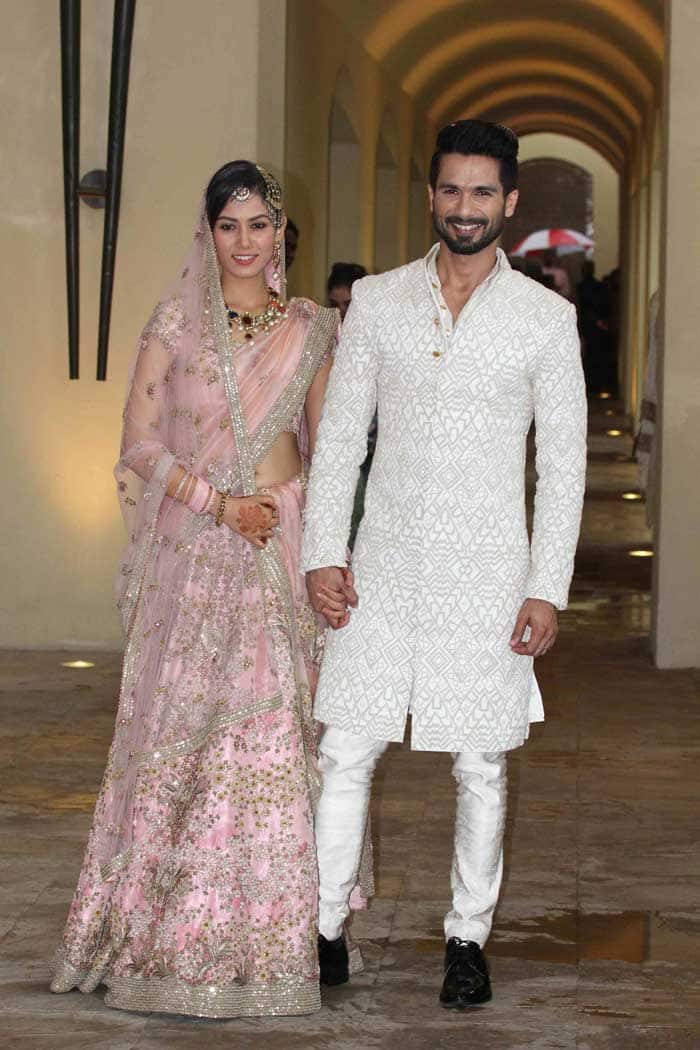 She sported an elaborate Navratna neckpiece and earrings set, and teamed her look with a ‘maang-tika’ and a ‘jhoomar’ on the side of her head. 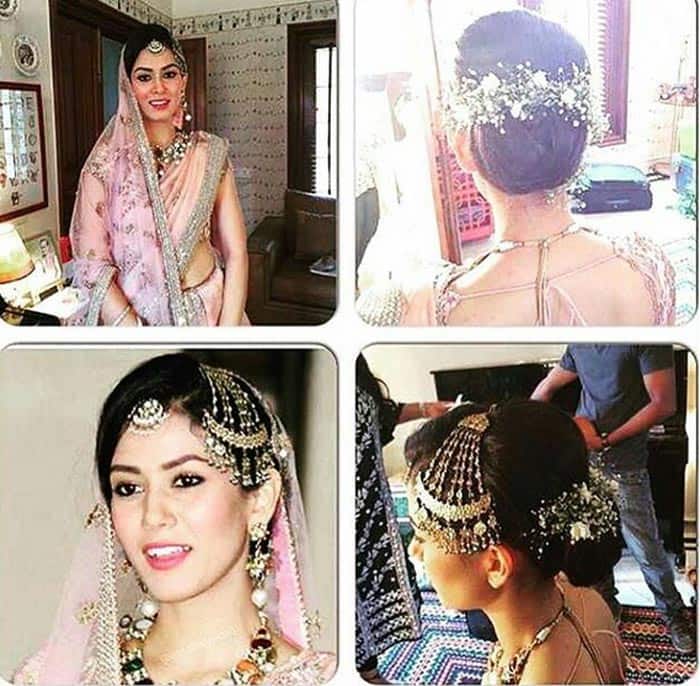 Later that day, Shahid Kapoor took to Instagram to share his first selfie with wife Mira Rajput. He captioned it, “#hitched”. In the picture Mira is seen leaning on Shahid’s shoulder with the actor hugging his new bride.

On the evening of the wedding, a grand reception was held at the same venue for friends and family. 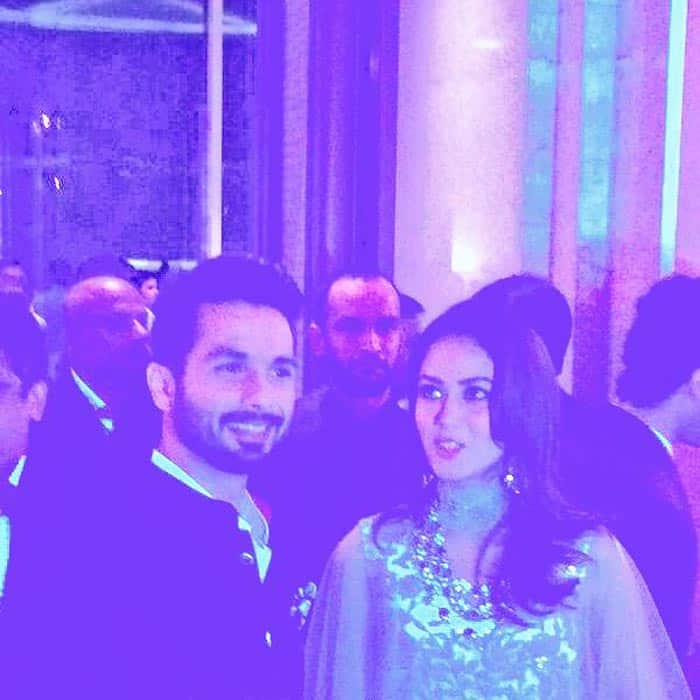 The celebrations were nothing short of royal as Mira was a stunner in a gorgeous couture outfit with sheer that had an intricate cutout border that was similar to Sonam Kapoor’s pale pink Cannes outfit from last year, also by designer Anamika Khanna. 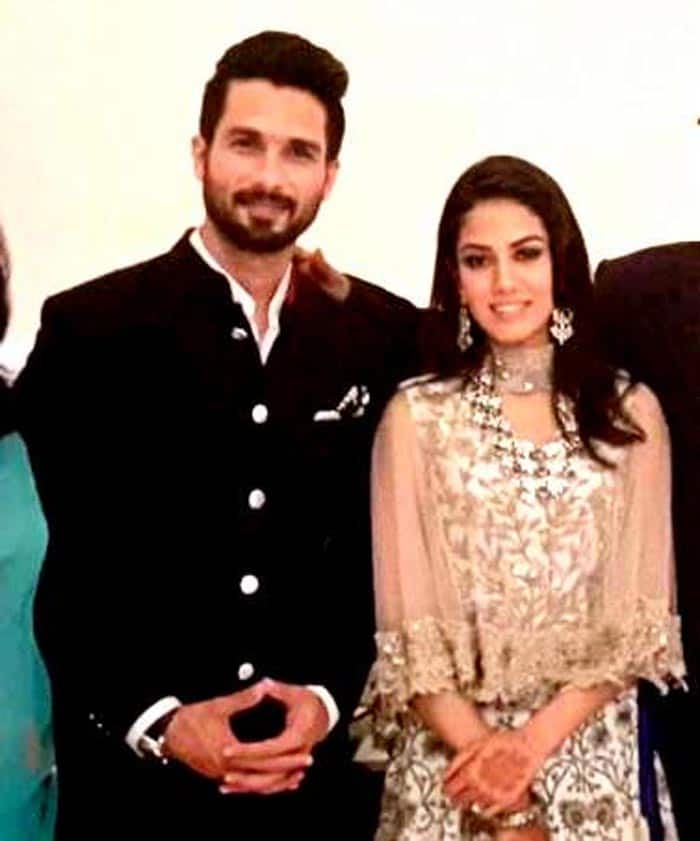 Shahid Kapoor was dapper in a black bandhgala suit as the actor and his new bride mingled with guests. 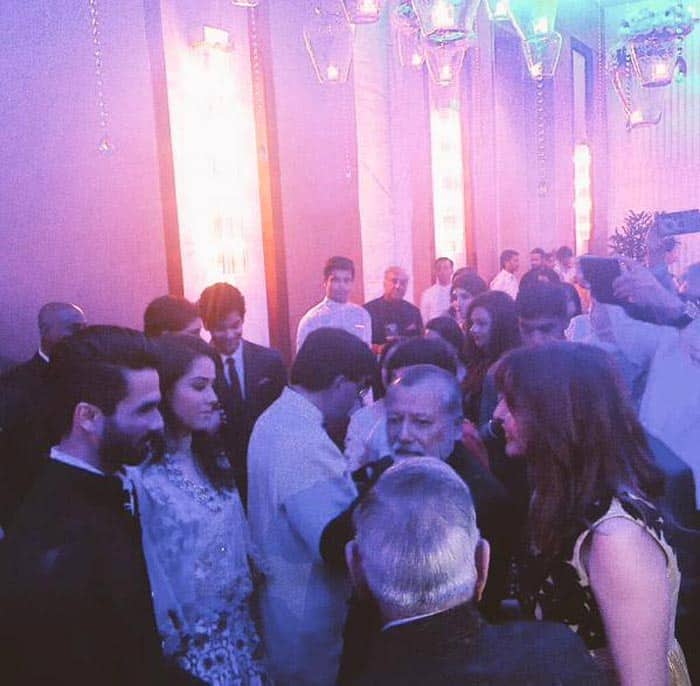 Prior to the main wedding ceremony, which took place on July 7, the haldi and sangeet was held on July 6. Pictures and videos of Shahid and Mira matching steps at the sangeet, flooded the internet. The couple’s families were also seen dancing to Shahid’s hit songs at the summer Punjabi wedding. 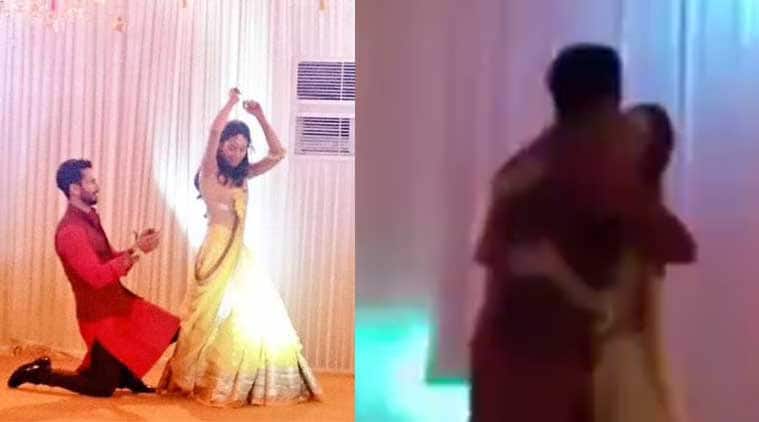 Mira Rajput glowed in a yellow Anita Dongre lehenga with matching gold jewellery. A string of yellow flowers around her neck and in her hair, added to her bridal look. The outfit went very well with the groom’s red kurta, bandhgala and black churridar.

Shahid Kapoor was seen making his way to the sangeet ceremony with a big smile on his face. 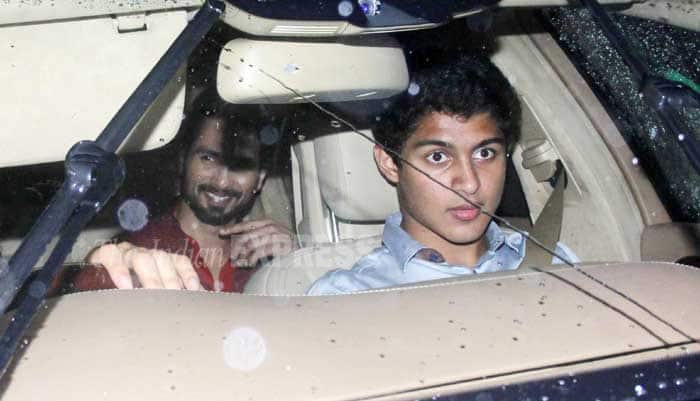 Pictures of a glowing Mira during the haldi ceremony also made their way to the Internet. In keeping with the theme of her haldi and kaleera ceremony, Mira was radiant in a yellow outfit by designer Anamika Khanna. The then bride-to-be was seen with a garland of white flowers to match a wreath on her head. Shahid Kapoor created quite a frenzy when he arrived in the capital on the day of the sangeet (July 6). 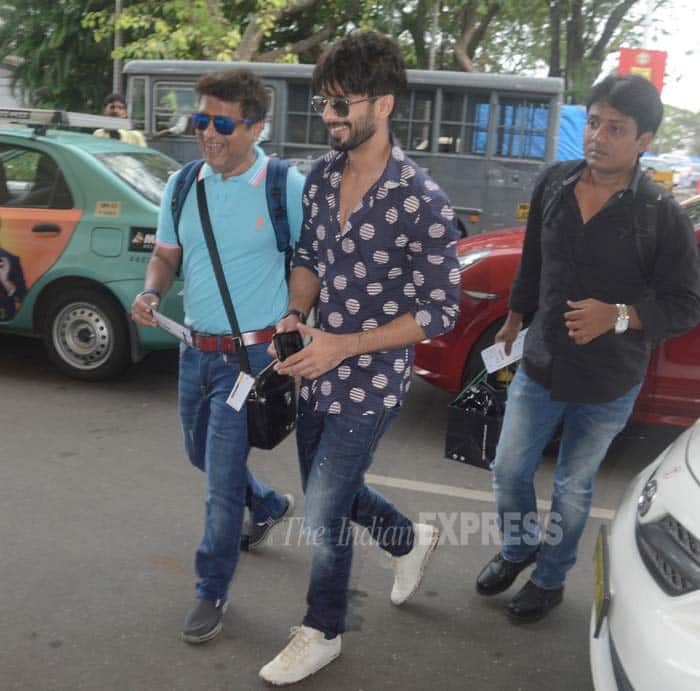 The actor was casually dressed in a printed shirt, jeans and shades. Shahid’s parents – stepmother Supriya Pathak, father Pankaj Kapur, stepbrother Ruhaan, friends and relatives were seen arriving at the Oberoi hotel a day prior to the sangeet. Shahid and Mira’s Delhi wedding card was simple and classy, containing the details of the wedding. It had Mira’s parents – Bela and Vikramaditya Rajput, and Shahid’s parents Neelima Azim and Pankaj Kapur and stepmother Supriya Pathak inviting the guests to their children’s wedding. Below the details is written – “No gifts please. Only blessings.” It was decorated as a package with some goodies in the corner boxes.

Minions movie review: This one is for kids