Shah Rukh Khan: I would love to dance to the tunes of ‘Gangnam Style’ with Psy

The actor was formally appointed as the 'Goodwill Ambassador' for South Korea for the coming year. 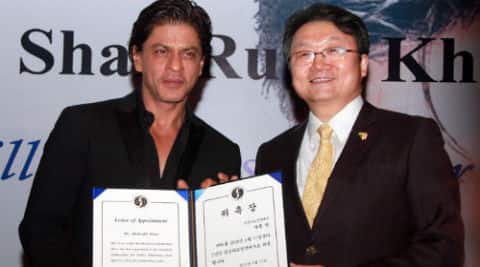 Shah Rukh said he was humbled to receive such an honour from South Korea. (PTI)

Bollywood superstar Shah Rukh Khan has expressed his desire to dance with Korean rapper sensation to the tunes of his global smash hit ‘Gangnam Style’.

The 48-year-old actor was formally appointed as the ‘Goodwill Ambassador’ for South Korea for the coming year at a glittering ceremony here today.

Shah Rukh said he was humbled to receive such an honour and promised to do his best in promoting goodwill between the two countries. “I feel very proud and humbled. I know you had many choices but I am so glad you chose me for this honour. I am happy that I was considered good enough to be named the
Goodwill ambassador.

“I would love to bring the two countries closer by visitations and through my films. I will also try and make a film there,” said Shah Rukh said after receiving the appointment letter from Joon-Gyu Lee, Ambassador of the Republic of Korea in India.

“I would also love to dance to the tunes of ‘Gangnam Style’ with Psy. I think he has learnt that dance step from Bollywood. I thank the government of South Korea on behalf of me, my family and my country,” he added.

The Korean government initiated the public diplomacy agenda ‘The Goodwill Ambassador’ in 2012.  Shah Rukh is the eighth foreign celebrity to have been given this honour.

Thanking Shah Rukh for accepting the honour, Joongyu Lee said that the superstar’s popularity in Korea is unmatchable and his films “Om Shanti Om”, “Rab Ne Bana Di Jodi” and “My Name Is Khan” have been very well received by the Koreans.

“Shah Rukh Khan has a huge presence in the world including Korea. I hope he takes some time off his busy schedule and do something in creating good image of Korea in India. I hope with the help of his enduring personality he can contribute in increasing the popularity of Korean martial art form Taekwondo in India and cricket in Korea, besides bringing cooperation between the two film industries,” Lee said.

The actor’s association with South Korea dates back to 1998 when he was appointed the brand ambassador of a car manufacturing company. Besides that, Shah Rukh revealed that the first equipment he bought for his production was the jimmy jet from South Korea, which is now used extensively in the film industry.

“The first piece of technology that I got to India in my film company is actually South Korean… it was a jimmy jet. The whole unit was brought from Korea. My team got trained in South Korea. It is a piece of equipment that we use extensively in the Indian film industry now,” said the actor, who sported a small ponytail, which is his look from his next film “Happy New Year”.

The actor said that since there is a lot of similarity between India and South Korea in terms of culture and taste, the two countries can learn a lot from each other.

“There is lot of similarity like in music and even films. Just like our film, Korean movies also make social comments. But technologically, they are way ahead of us. Koreans are also very organised and disciplined, so that is something we can learn from them,” Shah Rukh said.

The event also saw a cultural performance of Taekwondo and Samulnori (traditional Korean instruments) by the students of the Korean Culture Centre, the only centre in Delhi to promote the Korean culture amongst Indians.