Ratna Pathak Shah on marriage with Naseeruddin Shah: ‘Sambhog Se Sanyaas Tak was our first play, and that’s the story of our life’

Ratna Pathak Shah, who will be seen in Disney Plus Hotstar's upcoming release Hum Do Hamare Do, spoke about how content on television is regressive, the change in Hindi cinema, and her love story with Naseeruddin Shah and much more. 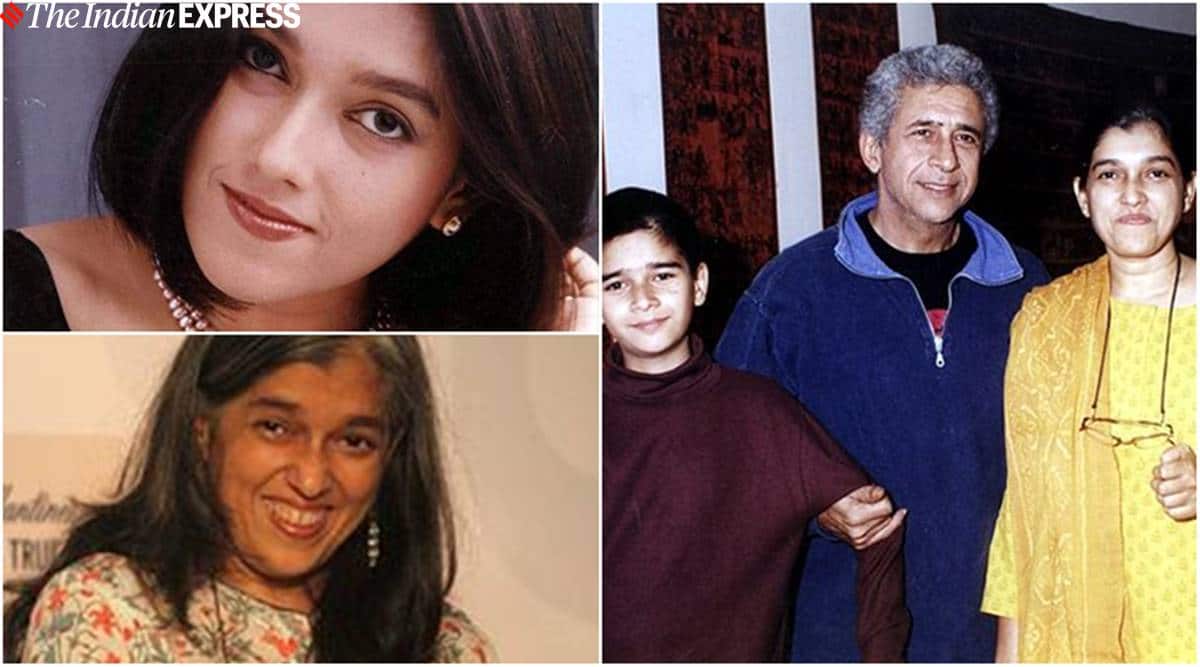 Ratna Pathak Shah opened up on Hum Do Hamare Do and her journey in the entertainment industry. (Photo: Express Archive)

Ratna Pathak Shah defines her upcoming film Hum Do Hamare Do as a “light-hearted look at a family,” which gave her the opportunity to work with Rajkummar Rao, Kriti Sanon and Paresh Rawal. The film marks her first collaboration with Rajkummar and Kriti. She has worked with Paresh Rawal before, but she confessed that he was one of the reasons why she signed the Abhishek Jain directorial.

“It is a light-hearted look at a family. What the script wanted to say, I liked it. The cast is a lovely bunch of people who I have not worked with earlier. I have not worked with Rajkummar Rao and Kriti Sanon before. I have worked with Paresh Rawal before but very little. So, it was a definite temptation to work with him. Final (reason) was Abhishek who is a first-time director. I have watched the work that he has done in the Gujarati cinema. Gujarati films were very orthodox but the new lot is looking at the world from a different and fresh perspective,” Ratna told indianexpress.com.

ALSO READ |Rajkummar Rao on Hum Do Hamare Do: ‘It is a shift from what I have done before’

Hum Do Hamare Do stars Rajkummar as Dhruv, an orphan who “adopts” parents, played by actors Paresh Rawal and Ratna Pathak Shah, to marry the love (Kriti Sanon) of his life.

Talking about her co-stars Rajkummar and Kriti, the 64-year-old said she was amused and impressed. “What I observed is Rajkummar Rao is a very reserved and private person but the way he transforms on-screen and performs the various part he plays with such sensibility and subtlety is impressive. This (Hum Do Humare Do character) could have been over the top too. But the kind of understanding he uses to strike a balance in his characters is something that left me amused. I realised that the kind of understanding he has (of the craft), I didn’t have as a young actor. Today’s generation of actors impresses me as they get into a character with a lot of thought and clarity. They can guide themselves to create a clear path and etch a perfect understanding for the characters they play,” Ratna voiced, adding that with Kriti she was “so pleased to see how balanced she was and had such a clarity about her roles.”

Ratna said she was happy and proud to see that actresses today are choosing demanding scripts. “In the yesteryears of cinema, heroines were concerned about their hair, makeup and outfit. But today’s actresses, thankfully, have gone beyond it,” Ratna said. She furthered described Kriti as a “warm and open kind of person, which sits very well on cinema. The kind of transparency she imbibes is such great quality and has worked wonders for her in this film.”

However, the Lipstick Under My Burkha actor also agrees that the present generation had examples they could follow, which was not the case when she was a “young actor.”

“I feel that. I feel as a woman actor, there was a lack of examples to look up to or learn from. I did not want to be Babita or the kind of personality that was meant to sing, dance and look good. I was not interested in being that. So, if not the quintessential retro heroine then what? Those days, there were only limited parts for women. Or you take up the character role path where you end up being boxed. But today, the kind of parts being written for women – young or old – are much more varied and real. They reflect the differences we see in real life, which is very important,” she explained.

Citing an example of Bhumi Pednekar’s role in Dum Laga Ke Haisha, Ratna said such roles “were not written in those days”. “Today, it is surely a big advantage, and young actresses are certainly living up to that expectations. Cute banna, khoobsurat banna aur secondary role karna, iske alawa options hi nahi the because of which, we saw the kind of acting that we did. Pick any actor from our era, sab wahi cute, bubbly, cheerful, zor se hasne wali or damsel in distress. There was only these kind of roles to play. And women are not just that. There is nothing women can’t do. We have so much variety to offer, so many different personalities too, which went unnoticed and untapped,” she continued.

“Having said that, even men have suffered from these stereotypical representations. If you scored a hit with an angry young man avatar on screen, you were constantly playing the same thing. So, the limitation lay with the directors and the writers. If there were well-written scripts back then, actors would have risen to the occasion. Today, we have better scripts, which is why we can give a quality performance,” Ratna mentioned.

When she stated that she didn’t want to become a quintessential heroine, we were keen to know if that motivated her to pick up content that broke stereotypical presentation of certain characters, her role in Hum Do Hamare Do being one of the examples.

“I will go back a little and talk about Idhar Udhar (1985), which was my first professional job. I played a young girl, who was quite silly yet sensible in some ways. Now that I look back at it, I find it was a modern concept. Three people living under one roof, not related by sex or blood. Three different kinds of personalities who were living like friends. Can you make such content today? It will be so difficult to write such a story. People would be like ‘Haaye! ladka ladki ek saath ek kamre me reh rahe hai? Aise kaise ho sakta hai.’ Today, we are becoming more backward, regressive in our social attitudes. For example, Tara was based on women living their life without any help from their parents or husbands. It spoke of women creating an existence of their own. So, back then, television was much more progressive and forward-looking. We had series like Udaan or Shanti, there was so much variety!” Ratna said, adding that today’s television content makes her “cry”. 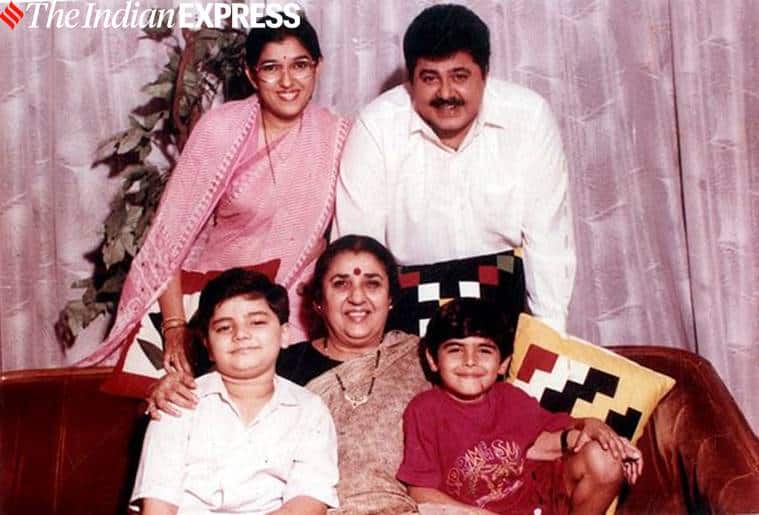 “Today, we are back to saas-bahu dramas. I feel like crying when I watch the kind of content being played on television these days. It is so crude and regressive. Kyun ho raha hai? Ye kya hai? Is this the meaning of sanskriti? So backward!”

“Idhar Udhar, Filmy Chakkar allowed me to explore myself as an actor. And whatever I learned back in those days, helped me in Sarabhai vs Sarabhai, Jaane Tu Ya Jaane Na or Lipstick Under My Burkha. It did not happen overnight, it happened because of the hard work I did over the years,” she said. Ratna Pathak Shah in a still from her show Sarabhai Vs Sarabhai. (Photo: Express Archive)

But even after years of being a part of the industry, Ratna doesn’t think she can be called a sought after actor. “I was not a sought after actor for many years. For several years, I got no work at all. Now also, I get a variety of parts and I pick what is interesting. I am quite astounded that without much suffering, I have had a wonderful career. Also, (over the years) I have become a better actor, undoubtedly. When I started, I was an average actor but I got the chance to better myself and I have grabbed those opportunities with both hands. But I cannot say I have explored myself fully as an actor, and I hope those wishes come true slowly and steadily.”

So, what are these roles she wishes to portray? “I like doing contemporary Indian woman. I, unfortunately, have been stuck with urban, upper-class Indian woman format for a longish time. For example, I don’t know what it would feel like to be a homeless woman. Nowadays, we spot a lot of homeless women. Everyone has a story. Either they have been thrown out of the house or they have left their house to achieve their dreams. Some are also young. That is an area, which would be hard to explore. But that is what acting is about – to live a life you didn’t get a chance to live or didn’t want to live. How beautiful it is that you can experience all these lives as an actor without facing the consequences. Or someone who is mentally disturbed or finding it difficult to fit in. I have not explored how women are in the rural space. There is so much to explore. I always feel acting is a way to learn about people. So, I would love to explore.”

Coming back to her role in Hum Do Hamare Do, Ratna Pathak Shah plays the love interest of Paresh Rawal. The trailer also features a cute love angle between the two, which made me wonder what was the love story of Ratna and Naseeruddin Shah. “Itna kuch bhi romantic nahi hua tha,” confessed Ratna, adding that they fell in love, got married and have been “inseparable” ever since. A picture of Naseeruddin Shah and Ratna Pathak Shah from one of their theatre plays. (Photo: Express Archive)

“We fell in love and have been inseparable ever since. The first theater play we did together was titled Sambhog Se Sanyaas Tak, and that is the story of our life. Bas sanyaas lena baaki hai (laughs). It’s a relationship, which has been very useful. It is a relationship of equals, of friends, which has been a blessing for us. We became very good friends and stayed very good friends,” the actor said. When asked what about Naseeruddin Shah inspires her even today, Ratna said, “Everything. His ability to work hard above all. He is an extraordinarily hard-working actor, which inspires and pushes me to do better. I am very lazy. Itni hardworking nahi hu. Toh Naseer ki dekha dekhi mein, mujhe bhi mehnat karni hi padti hai.” 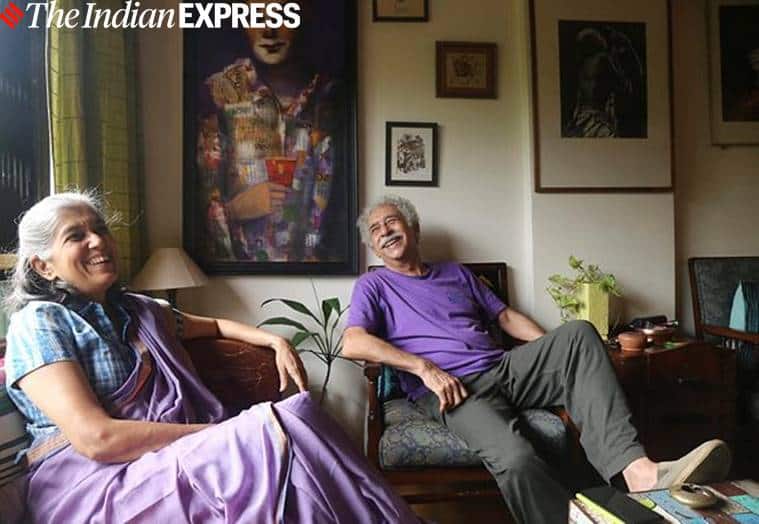 On a concluding note, Ratna said she is excited about her film releasing on Disney+Hotstar. She finds OTT as a space that has shaken up Hindi cinema.

Advertisement
ALSO READ |Naseeruddin Shah as Bollywood’s most blistering polemicist: Hate him, love him, you can’t ignore him

“OTT is the reason why we have got the kind of variety in scripts we see today. Entertainment has become a part of our house. It is sure a blessing. And to top it all, we can watch world cinema, which has changed our choices in the content we consume. OTT has broken and shaken up Hindi cinema and its stereotypical representation. Young writers and directors are getting a chance to represent their point of view, their stories, and represent the India that I see every day around me. It is a silver lining for actors for sure,” she said.

Hum Do Hamare Do will release on Disney+Hotstar on October 29.