Prachi Tehlan wedding LIVE UPDATES: We take you inside the wedding of actor Prachi and businessman-wildlife conservationist Rohit Saroha. The marriage is being held in Delhi.

Actor Prachi Tehlan is set to tie the knot with Rohit Saroha today. The sportsperson-turned-actor has been sharing updates and pictures from her pre-wedding functions on her social media handles. During an Instagram live with Indian Express Entertainment, Prachi revealed what she found attractive about Rohit and how she was feeling about getting married during the coronavirus pandemic. She said, “Rohit is very adventurous like me. We’ve never had this 9 to 5 kind of a work schedule. He’s also never done usual things in life which really attracts me towards him. He is a wildlife conservationist. He’s also represented India at the BRICS in Russia and has studied law. So, like what I’ve done in my career – being a sportsperson, a corporate person and an actor, even his life has been a roller-coaster ride. That’s something where we connect. And he’s tall!”

Prachi was speaking while taking a break from her mehndi ceremony. She said how it was sheer destiny that she found her groom in Rohit, someone she’s known for the past eight years. “If you had asked me this question two months back, I would’ve said I haven’t found my groom and I’m not getting married for the next 3 years. But as they say, marriages are made in heaven, and I truly believe in it now. Me and Rohit got to connect with each other during the lockdown. We felt our 8-year-old love and connection again. We thought let’s not waste any more time and take a call, and spend time and life with each other.” Getting candid about Rohit proposal, Prachi further said, “Rohit used to like me a lot even in 2012 when we met at a family function. (When we reconnected) The very next day, he proposed marriage. I was shocked because that wasn’t in my mind. Then we spoke about it, and our parents were already involved. So everything just happened.”

Before becoming an actor, Prachi was a sportsperson. She was the former captain of the Indian Netball Team which represented India in the 2010 Commonwealth Games and other major Asian Championships in 2010-11. In fact, under her captaincy, the Indian team won its first medal in 2011 South Asian Beach Games. She then made her acting debut with television show Diya Aur Baati Hum (2016). He first movie was Punjabi film Arjan. Prachi was last seen in her debut Malayalam film Mamangam, starring Mammootty in the lead role.

And the moment is here. The actual wedding ceremony has begun.

Have you seen these photos of Prachi Tehlan and Rohit Saroha? The happy bride shared, "Marriage is just a gamble and it really does not matter for how long you know the person. I just got a gut feeling that this is the man I want to spend my life with. Also, this is the time that we can spend well with our loved ones, so we decided to get married soon in this lockdown."

'This is such a special picture for me'

Family is literally everything ! They are the ones who stand by you in every thick and thin and can do anything to see a smile on your face ❤️ This is such a special picture for me ! 🥰 Styling: @rishuguptaa Outfit : @shashankaryaofficial Earrings : @shillpapuriidesignerjewellery Photography : @divinemantra Footwear : @lightupsoleofficial Makeup : #dilshadahmadkhan Hair : @Hairstylist.arvindsharma Hair Assistant : @mohitsharma.1990 #indianwedding #shaadifunction #PrachiTehlanwedsRohitSaroha #lockdownwedding #familyfun #indiancelebrations 🥰

Prachi Tehlan shared on Raksha Bandhan day, "Family is literally everything ! They are the ones who stand by you in every thick and thin and can do anything to see a smile on your face ❤️This is such a special picture for me !"

Prachi is a poser 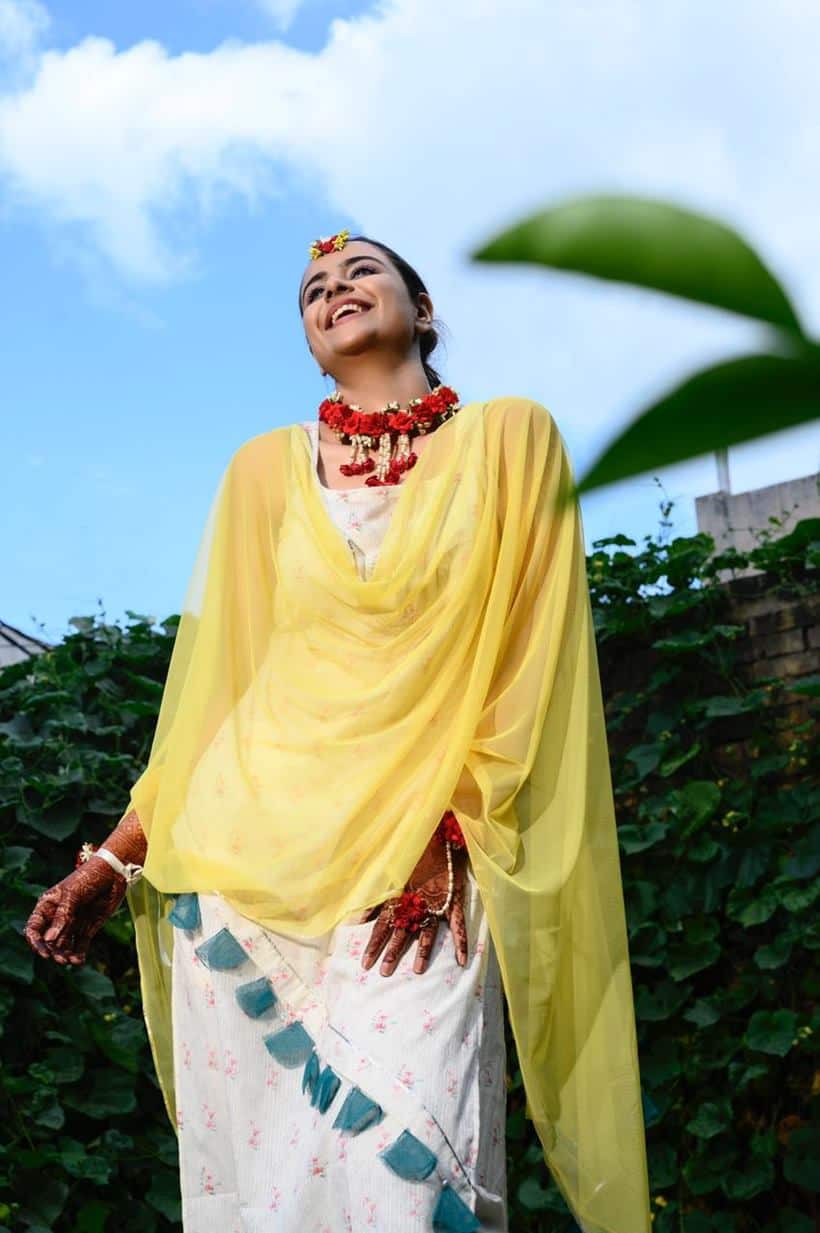 Prachi Tehlan is happy to have her loved ones by her side. (Photo: PR Handout)

'Wedding is happening just in the manner I wanted'

Prachi shared that her wedding is happening just in the manner she wanted it to be, despite Covid-19 restrictions. "I always wanted to have a close-knit affair with only people who matter to me."

'Loving every bit of the process'

"Yellow for Haldi is a MANDATE! Loving every bit of the process," wrote Prachi Tehlan as she shared a photo.

This is how Prachi announced her wedding

@rsaroha I quite agree with this! Do you? 😜❤️ Marriage do are made in Heaven! #belief #destiny #marriagesaremadeinheaven #shaadimagic #countdownbegins

"@rsaroha I quite agree with this! Do you? 😜❤️ Marriage do are made in Heaven!," wrote Prachi as she announced her wedding via social media.

'Marriages are made in heaven'

Prachi told indianexpress.com, "Someone rightly said marriages are made in heaven. If you asked me a few months back, I would have said marriage isn’t on the cards for at least three years. But all of a sudden this happened, and here I am. Super excited and happy for this."

Unseen photos of the bride 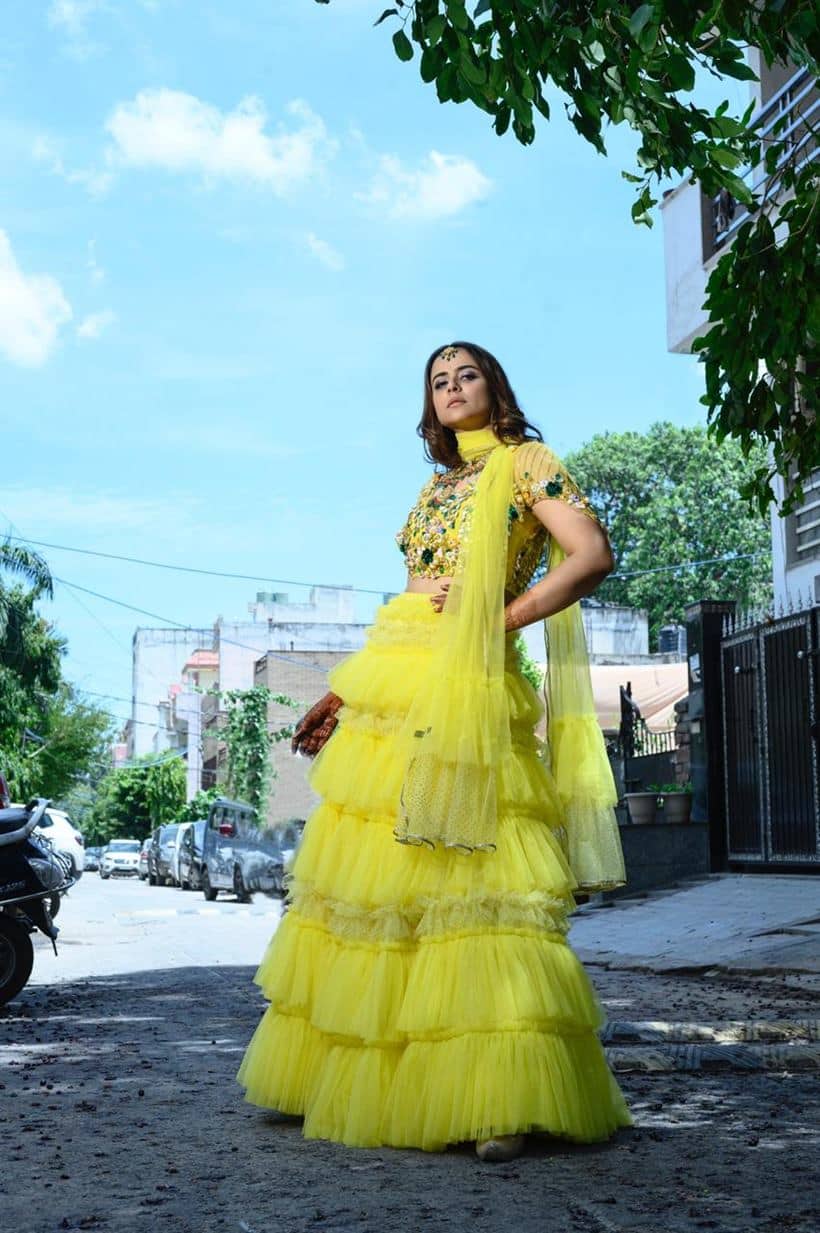 Prachi Tehlan is enjoying every bit of her wedding. (Photo: PR Handout)

Prachi is all smiles Prachi Tehlan is enjoying every bit of the wedding functions. (Photo: PR Handout)

Prachi is ready for the ring exchange Prachi shared a sneak peek of her outfit as she gets dressed for her ring exchange with Rohit.

On August 7, a ring exchange will take place in the afternoon, followed by a sagai and then the wedding. The glow cannot be missed on Prachi Tehlan's face.

Prachi Tehlan shared a sneek peek of her haldi outfit

A big shoutout to @vidhiverma_acoutureatelier for this amazing Haldi outfit. In complete love with this stunning piece of creation. It took long discussions, and 15 days to customise this lovely outfit. It truly captures the beauty of ruffles. Comfortable to wear, yet stylish to flaunt, this outfit is beyond eye-pleasing.💛 @rishuguptaa

Prachi Tehlan wrote with the photo, "In complete love with this stunning piece of creation. It took long discussions, and 15 days to customise this lovely outfit. It truly captures the beauty of ruffles. Comfortable to wear, yet stylish to flaunt, this outfit is beyond eye-pleasing.💛"

Wedding gift from my favourite producers who gave me by ACTING break in Diya Aur Baati Hum ❤️. Thank you so much @shashisumeet @shashisumeet_ ‘Ma’am and Sir’ for this adorable lovely surprise. Your blessings and love means the world ❤️❤️@shashisumeetproductions @rsaroha 😍

"Wedding gift from my favourite producers who gave me by ACTING break in Diya Aur Baati Hum ❤️. Thank you so much @shashisumeet @shashisumeet_ ‘Ma’am and Sir’ for this adorable lovely surprise. Your blessings and love means the world ❤️❤️@shashisumeetproductions," wrote the actor sharing the photo. Prachi Tehlan had her mehendi ceremony on August 5. She looked stunning.

Prachi Tehlan had made her Malayalam debut last year with Mammootty starrer Mamangam, that released in December 2019. The M Padmakumar directorial had Prachi in a traditional avatar, while she also indulged in some action sequences. The sportsperson-turned-actor told indianexpress.com how the acting bug bit her. She said, "Acting happened by chance. When I was working as a consultant with a firm, I was approached by Diya Aur Baati Hum’s production house through Facebook. I saw the message and discussed it with my family. I don’t have anyone in my family who comes from the industry. I come from a typical Jatt family where girls are usually kept away from any such exposure. However, I took a chance. My family was supportive. I auditioned for the role and in three days, I was an actor. So, that is how the journey began in 2016."

Speaking about making a switch to television, she added, "When I worked on the television series for seven months, I was extremely busy. During that phase, I spoke to a lot of people from the industry and understood the culture. I knew that television would be restrictive or a limited platform because of my personality. Also, I guess films are very challenging in comparison to television. Having said that, I have not tried my luck in Bollywood yet even though I know people in the industry. I wanted to gain experience. So, I worked in a couple of Punjabi films and then Ikyawann (Star Plus series) happened. It is during Ikyawann that I auditioned for Mamangam. I think my every experience in the industry helped me get Mamangam."

Revealing her plans for the future, Prachi said, "I would love to do films in Hindi. I am open to web series as well. But I am awed by the way South works. The kind of content they make, the technicians and their creativity is absolutely amazing. So, for a while, I will explore the South film industry. However, Bollywood is always in the to-do list."