Prime Minister Narendra Modi, while speaking at the inauguration of the National Museum of Indian Cinema, said that films have played an important role in India's soft power. 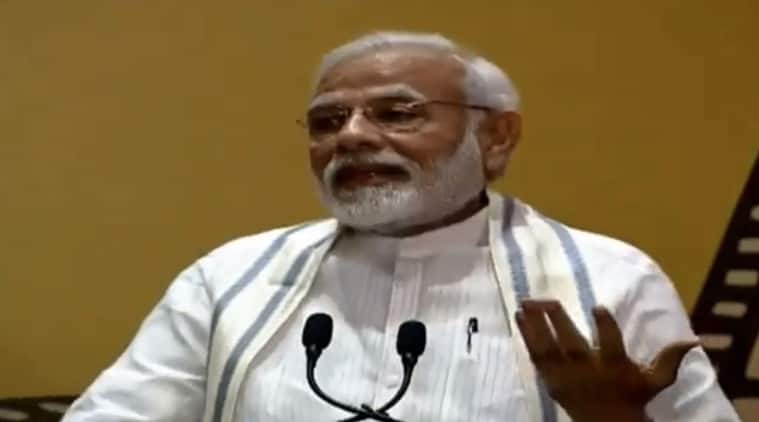 PM Narendra Modi assured the film industry that effective steps are being taken to curb piracy and “camcording”.

Noting that Indian films which once focused on “helplessness” are now changing, Prime Minister Narendra Modi said Saturday that in today’s India, there are more solutions than there are problems.

The prime minister was addressing a gathering of film personalities after inaugurating the National Museum of Indian Cinema here.

#WATCH: PM Modi asks “How’s the josh?” at the inauguration of National Museum of Indian Cinema in Mumbai. pic.twitter.com/KgcqJoKtYp

Once only rich people from “tier 1 cities” could enter the film industry, but now artistes from tier 2 and tier 3 cities are getting a foothold on the strength of their artistic abilities, the prime minister said.

“This shows India is changing. Earlier, poverty was considered a virtue… Films were about poverty, helplessness. Now, along with problems, solutions are also being seen. If there are a million problems, there are a billion solutions,” he added.

However, “if a government says it can do all work alone, it is fooling you. For sabka vikas (everyone’s prosperity) one needs sabka saath (everyone’s cooperation),” he added.

The prime minister mentioned that the museum has 30-hour-long digitised footage of World War II. With this, the valour of 1.5 lakh Indian soldiers who died in that war will be known to the world, he said.

“Our films are immensely popular outside the country too,” Modi said, adding that he met some world leaders who could recite entire lyrics of Indian songs though they did not know the language.

Films have played a huge role in India’s soft power, he said.

“Films can also boost our tourism sector,” he said, noting that foreigners still know little about our country beyond the Taj Mahal.

“The government has started working on single-window clearance system for film shoot permissions. A portal is being put in place, where you only submit required details and within a stipulated time clearances will be given,” he said.

About the piracy menace, the prime minister said he understands that it is “an insult” to the hardwork of the filmmakers. The government is taking steps to ensure that cam-cording (illicit recording of films inside theatres for the purpose of piracy) not just remains a punishable offence but attracts strict penalties, he said.

The government has scrapped over 1,400 outdated laws in the last four and a half years, he noted, and asked the film industry experts to give a detailed note on industry-related obsolete laws that should be similarly repelled.

There was a need to set up a full-fledged “communication and entertainment university” in the country, the prime minister said, seeking a proposal from the industry.

“Like the World Economic Forum held at Davos, can there be a similar global film summit in the country?” Modi asked, adding that “the world should get exposure to the industry that employs lakhs of people.”

Film personalities should tell youngsters, through social media, about their hardships and struggle before they made it big so as to inspire them, he said.

“This will help our youth in their life-building, character-building and prevent them from going astray.”

He also urged filmmakers to make films on history as well as science and innovation.

At the start of his speech, the prime minister invoked the popular line from the recently released film Uri: The Surgical Strike. “How is the josh?,” he asked, drawing laughter and applause.