Manmarziyaan row: A timeline of everything that has happened so far

A Sikh group raised objections over certain portions in Anurag Kashyap's Manmarziyaan. This forced its producers to 'voluntarily delete' three scenes from the film, leaving Kashyap and others furious. Here is a complete timeline of the entire controversy so far. A still from one of the probable troublesome scenes from Manmarziyaan featuring Abhishek Bachchan and Taapsee Pannu.

Just when the team of Manmarziyaan was basking in the praise, this Anurag Kashyap directorial found itself caught up in some trouble. Days after its release, the intense love triangle miffed a certain section of the Sikh community, leaving its makers to voluntarily delete three scenes from the film.

Here is a timeline of everything that has happened so far:

What is the controversy?

Abhishek Bachchan plays the character of Robbie, who is a cut Surd. The film shows him wearing his turban as soon as he arrives in Amritsar. In a scene, he smokes but removes his turban before doing that. However, certain scenes involving him and his wife Rumi have not gone down well with one particular Sikh group.

Which community got upset?

The Supreme Sikh Organisation on Tuesday filed a petition in the Jammu and Kashmir High Court objecting to a scene showing Robbie smoking a cigarette after taking off his turban. The complaint, which was against the screening of the film, stated that Robbie “solemnises his marriage rituals in a gurudwara and then goes out. He removes his turban and smokes a cigarette.”

As per the petitioner, it hurts the sentiments of the Sikh religion. The complaint further stated that since the actors are role models for the young generation, such scenes give a wrong message to the society.

Which scenes and characters from the film were involved?

In the film, Taapsee Pannu’s Rumi tells Robbie that she cannot get married to him, leaving him shocked. He then takes off his turban, hands it over to his house help and smokes a cigarette in sadness. In another scene, when Rumi and Robbie enter the Gurudwara for their wedding, Rumi gets flashes of her boyfriend Vicky in her mind. The third scene involved Rumi smoking a cigarette.

What did Anurag Kashyap say?

Anurag Kashyap, who wasn’t in the country when the complaint was filed, took to Twitter on Wednesday to issue a long statement with an apology, emphasising that “Manmarziyaan is a story of three individuals and not their religion.”

Here is what he wrote: 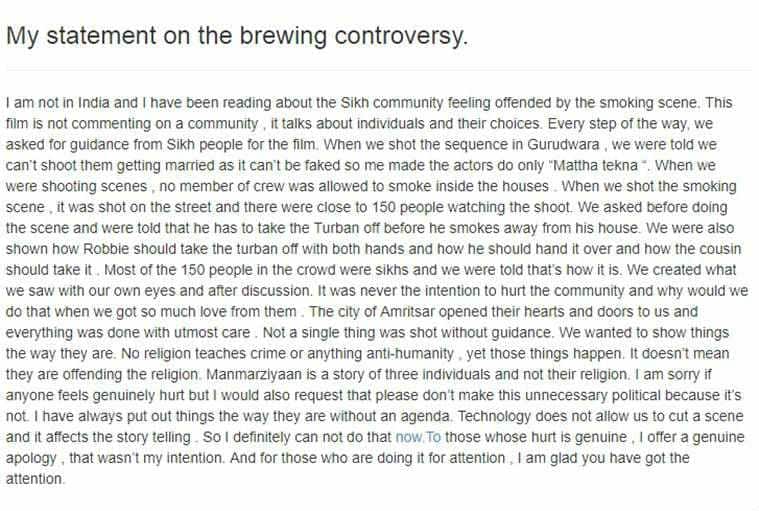 What did CBFC say?

The Censor Board examined the scenes which the makers of Manmarziyaan wanted to voluntarily exclude from the film, after objections raised by a Sikh group. CBFC on Wednesday released a notice about the modification to the film. According to the CBFC copy, the three deleted scenes include a 29-second smoking sequence of Abhishek, a minute-long scene featuring Taapsee Pannu and Abhishek entering a Gurudwara and an 11-second scene where Taapsee is shown smoking.

“We have removed the three scenes from the film as people’s sentiments were getting hurt. The said changes have come into effect in metros from today and will reflect across India from the coming Thursday-Friday,” a source from the production side told PTI.

Here is the censor copy of the deleted scenes: Who deleted the scenes?

Eros, which distributed the film, went on to delete the particular scenes. This however, was not a unanimous decision from the makers’ end.

What was Anurag Kashyap’s reaction on the deletion of scenes?

Anurag Kashyap on Thursday took to Twitter and revealed he wasn’t happy with the decision taken by Eros single-handedly. Sharing the CBFC notice on the deleted scenes, he wrote, “Congratulations. Here by all problems of Punjab are solved and Sikh youth have been saved. Happy to be back in La La land again. Next time you are threatened by a film please call Kishore Lulla directly on +91 **********. Eros knows how to solve matters in minutes.” 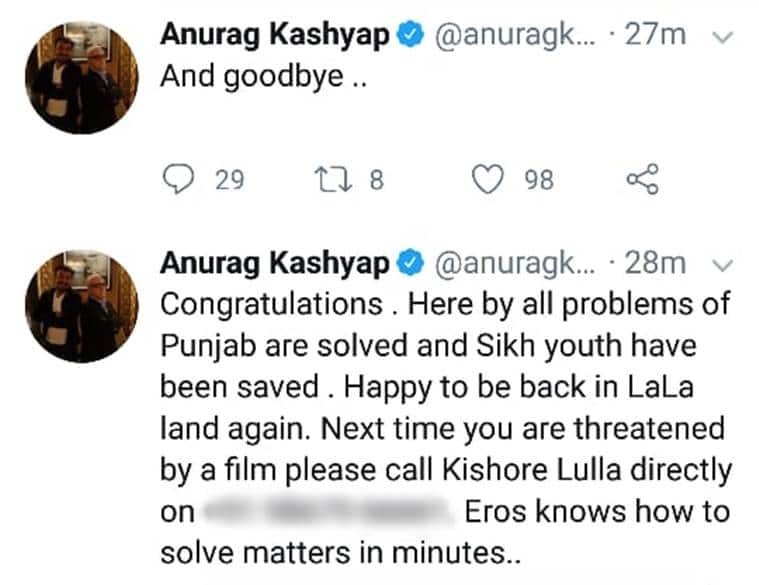 Anurag Kashyap’s first tweet which he had to delete. 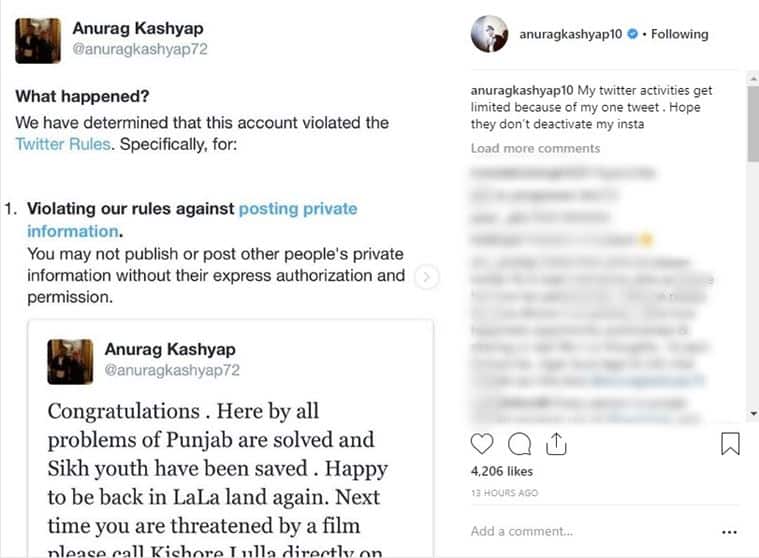 Filmmaker Anurag Kashyap, who isn’t new to controversies and has faced similar trouble during the release of his Udta Punjab, did not give up after he was forced to delete his tweet. He soon tweeted again with a screenshot of his chat with Twitter. This time his words were same, but without the telephone number of Kishore Lulla. He wrote, “Before my tweet is taken down -Congratulations . Here by all problems of Punjab are solved and Sikh youth have been saved . Happy to be back in LaLa land again. Next time you are threatened by a film please call Kishore Lulla directly on Eros knows how to solve matters in minutes” 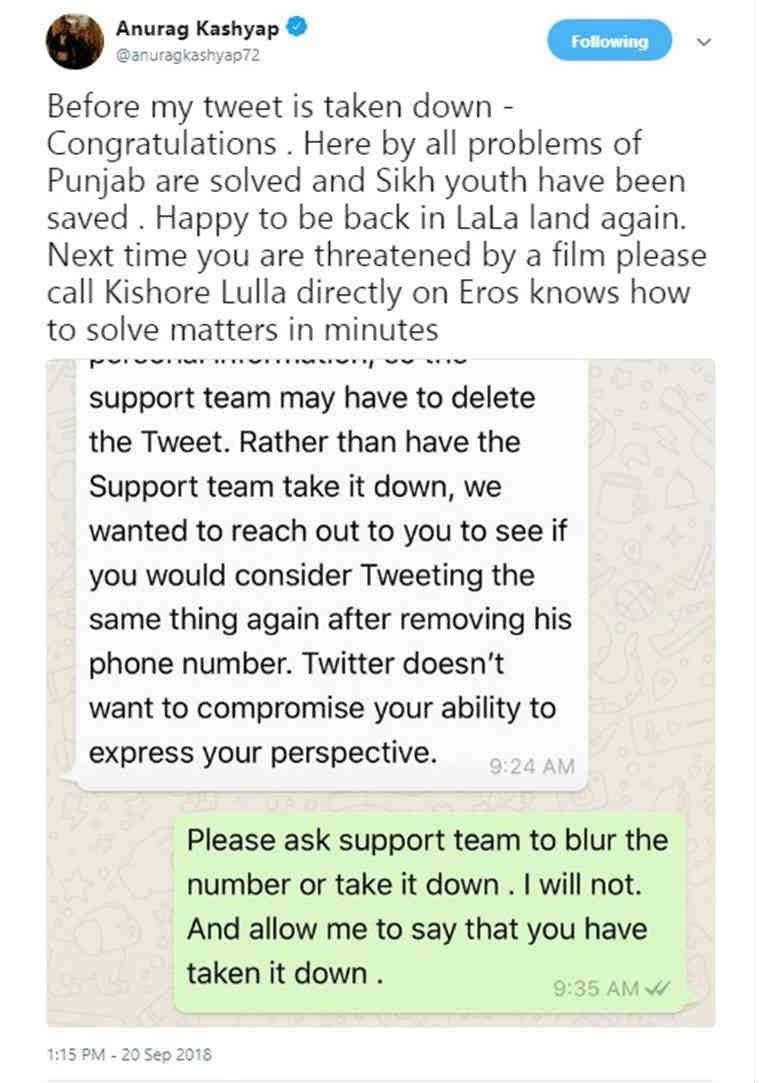 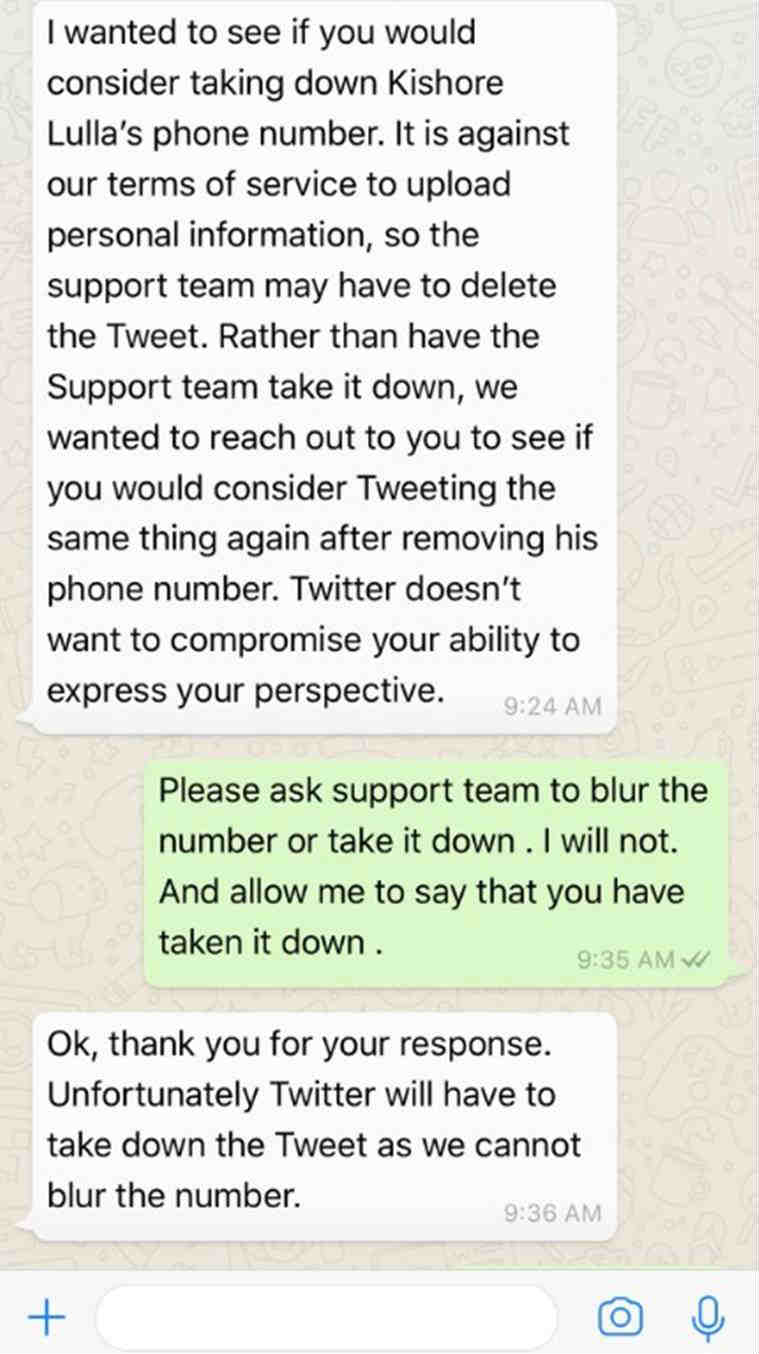 Screen grab of the chat Anurag Kashyap shared which he had with the Twitter support team.

Manmarziyaan distributors Eros International soon issued a statement saying, “Colour yellow is the creative producer on Manmarziyaan. We have the deepest respect for all communities and it is our intention to maintain neutrality and never intentionally hurt or disrespect any religion or community. We have the greatest respect for the law of the land and follow and implement all guidance of the Censor Board which is the supreme authority for film content in the country.”

How did the cast react?

Actor Taapsee Pannu, who plays Rumi in Manmarziyaan, was the first one to show her disappointment over the turn of events. Without any direct attack, she tweeted, “I am sure this edit will assure that no Sikh will ever Smoke and no woman will ever think about ANYONE else while getting married in a Gurudwara. THIS surely will make Waheguru proud and assures that MY religion is the purest,most righteous and peaceful ! #Proud” 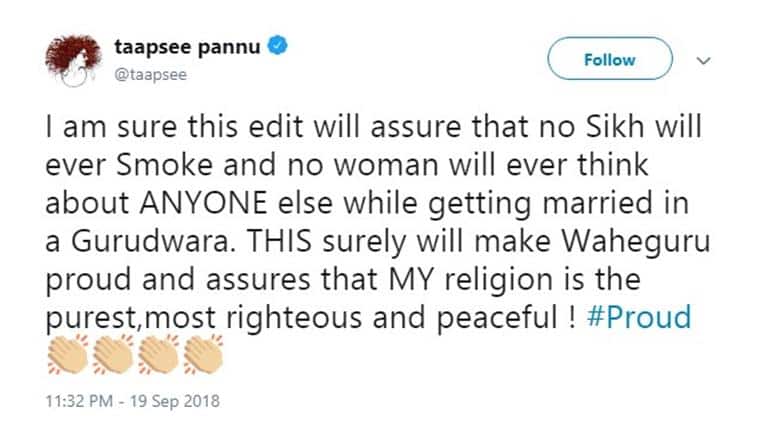 Who all reacted on the controversy?

Anurag Kashyap’s good friend and filmmaker Vikramaditya Motwane tweeted, “The one time the censor board showed maturity and our spineless studios shat and ran. What a terrible precedent to set.” 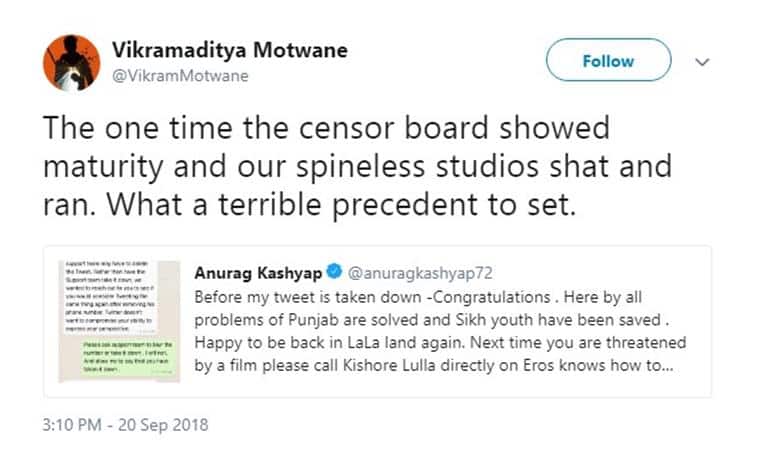 Actor Swara Bhasker also supported the film with a strong tweet. She wrote, “Peeps! #Manmarziyaan directed by @anuragkashyap72 is a delightful fresh contemporary love story which has been ‘voluntarily censored’ by producers due to threats of vandalism.. THERE IS NOTHING OFFENSIVE IN THE FILM. Watch it tonight as Anurag told it- be4 cuts take effect! ❣️”

What did the producers say?

Aanand L Rai, who has co-produced Manmarziyaan under his banner Colour Yellow Productions, issued a statement late on Thursday. The filmmaker read, “These cuts were made on a call taken by Colour Yellow Team. I feel we need to understand that this controversy happened after the film has released which leaves the producers and studio extremely vulnerable. Further, if the concept of the film itself was smoking, we would’ve taken a stand like we did for Udta Punjab.

Manmarziyaan is a love story and we believe that these cuts do not compromise with the genre it is. With the limited theatrical shelf life of films these days, we didn’t want the audience waiting to watch this film to suffer and be deprived of a film.

My heart goes out to Anurag but in the current situation, we have to be practical.”

What did the Rajasthan State Minority commission object to in Manmarziyaan?

The Rajasthan State Minority commission has issued notices to the CBFC, the producer and director of Manmarziyaan along with its distributors in the state for scenes which have allegedly “hurt” sentiments of the Sikh community.

Jasbir Singh, chairman of the commission told The Indian Express that the notices were issued on Saturday. He added that the commission has taken cognisance of the issue.

“We have written to the chairperson of the Censor Board, the producer and director of the film along with its distributor in Rajasthan that as per the newspaper reports, the sentiments of the Sikh community has been offended and their feelings have been hurt. We have asked them to remove the objectionable shots and tell us by October 1 about the action taken by them,” Singh said.

Adding that smoking is considered objectionable according to the Sikh traditions, he added, “I have been told that even the character of a Sikh girl in the film participates in smoking in one of the scenes. I have written to the Censor Board, asking it that how it allowed such shots in films in the first place when there is a committee to monitor films before certification.”

Flipkart employees to cash in on ESOPs worth $800 million