Ahead of Alia Bhatt’s Gangubai Kathiawadi, here’s the making of a Sanjay Leela Bhansali heroine After long-time collaborators Aishwarya Rai and Deepika Padukone, Sanjay Leela Bhansali has joined hands with Alia Bhatt for Gangubai Kathiawadi for his next.

When Sanjay Leela Bhansali first presented Aishwarya Rai on screen with their maiden collaboration Hum Dil De Chuke Sanam, it was the start of something significant in the auteur’s career. Over the years, Bhansali has carved a niche for himself when it comes to presenting Hindi film heroines on screen. Unlike most of his contemporaries, his female characters drive the film and are presented in a charmingly delicate way on screen. The woman in a Bhansali film isn’t present to aid someone else’s story, she is the story. Looking like a glamour goddess, the many female actor collaborators of Bhansali are remembered for their grace on screen and the perfection they bring to each frame.

In the many years that Bhansali has been making movies, female actors like Aishwarya Rai, Madhuri Dixit, Rani Mukerji, Priyanka Chopra and Deepika Padukone have worked with the filmmaker and now, Alia Bhatt is the latest actor to join his cinematic world.

Each of these actors found fame and glory as they worked in a Bhansali film, and over the years, the title of a Bhansali heroine has achieved a prominent status. Of course, that has a lot to do with the fact that these women turned out to be superstars of the time, but also because Bhansali’s female characters had their own agency, even before it was mainstream to do so. For instance, take the case of Priyanka Chopra’s Kashibai in Bajirao Mastani. Even though she played a supporting role in the film and was on screen for just a few minutes, Kashibai made an impression that’s hard to shake. During a media interaction in 2015, Priyanka shared that she was the first person to be cast in the film, even though hers was not a titular role. “Let me tell you, I was the first person to be cast in this film. I remember Sanjay came to me with this script and he was clear he wanted me to do this film,” she had then said. Salman Khan and Aishwarya Rai in Hum Dil De Chuke Sanam.
Also Read |Alia Bhatt on Ranbir Kapoor: ‘I am deeply in love with him, I believe in the relationship’

Bhansali has had a long association with Aishwarya Rai, and his films have added a lot to her filmography. In an earlier interview with Filmfare, Bhansali had shared that he first met Aishwarya at a screening for Raja Hindustani and just instantly knew that this was his Nandini (Hum Dil De Chuke Sanam). He confessed that though she had a “Miss World image and a Western face”, he thought that the woman who was popularly known as the most beautiful woman in the world would look perfect as the ghaghra-wearing Nandini.

Bhansali worked with Aishwarya again in his iteration of Devdas. The fact that Aishwarya’s wardrobe for the film had over 600 sarees speaks volumes about the level of detail that went into the creation of Paro’s character. Rai shared in a 2002 interview with Man’s World, “This film would never have turned out the way it has, had it been conceived and executed by another director. It’s entirely his vision, everything. From the fabrics used for our costumes to the chandeliers on the set, he’s handpicked everything himself.”

For Chandramukhi, played by Madhuri Dixit, Bhansali had roped in the best crew members available and created a set that still leaves you in awe. In an earlier interview, Bhansali had mentioned that casting Madhuri and Aishwarya felt like it was meant to be. He saw a lot of parallels between the two, in terms of their performance and their screen presence. “That man, he works with a passion. The way he gets the scenes written, the way he gets the songs done, his eye for detailing, every little thing has to be taken care of,” said Madhuri about Sanjay in the making of Devdas. 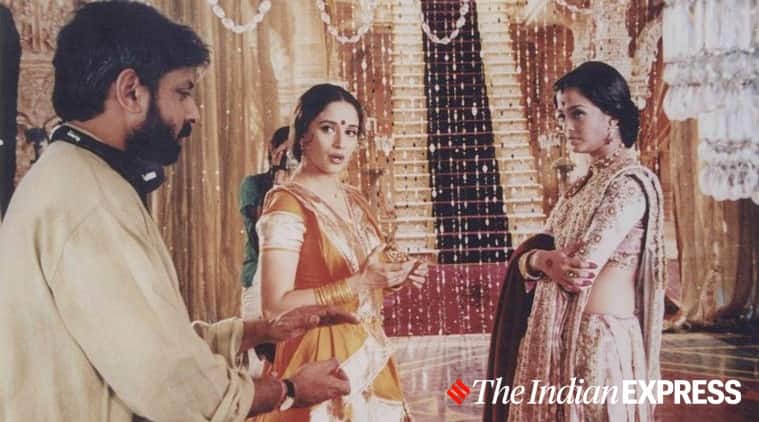 When Bhansali started collaborating with Deepika Padukone, it was the start of a new chapter for both of them. Playing Leela in Goliyon Ki Raleela Ramleela, Mastani in Bajirao Mastani and Rani Padmavati in Padmaavat, Bhansali presented Padukone in a way that enhanced her beauty and extracted some of her best performances. She once called their collaboration an “iconic partnership” that created “iconic characters.” “I say this without a shadow of a doubt that I wouldn’t be half the person I am today if it wasn’t for Sanjay Leela Bhansali,” wrote Deepika in a social media post.

Deepika has said on numerous occasions that Sanjay Leela Bhansali brings out the best in her as an actor. She once told Pinkvilla, “I believe I share a very spiritual relationship with him because we don’t talk much, we don’t communicate much but whatever we feel we do through the eyes. We look at each other and we know exactly what the other person is thinking or feeling. And to me, I think it also says a lot about the faith that he has in me as an actor. The fact that before every scene, he does not have to discuss graph, he does not have to discuss what this actor is going to do with this particular character. What is she going to do … there’s no discussion. He gives me that freedom. He has enabled me as an actor in so many ways and I think it just means that there’s an immense amount of faith and trust.” In Bhansali’s next titled Gangubai Kathiawadi, he is collaborating with actor Alia Bhatt. “He gives you a lot of space and time to live with your part and character. I am the newest addition to the list of actors that he has worked with. You ask any of the actors, everyone says he is just the next level, working with him is a dream, it is like a trip. It is like most nourishing food for an actor, like the healthiest there is,” Alia said in a recent interview with indianexpress.com.

It is yet to be seen if Alia becomes Sanjay’s muse for his upcoming films and if she can create the same kind of magic that was once created by female actors who came before her in an SLB film.