Earlier, during an interview with The Indian Express, filmmaker Imtiaz Ali had opened up about the concept of Love Aaj Kal.

“It is not a sequel or a continuation. It is a fresh story with new characters. The concept, of course, is the same. Two stories, set in different eras, interact with each other. That’s the reason I was very clear about calling my latest movie Love Aaj Kal. This story came in my mind some years ago, when I was talking to my daughter (Ida) about the romantic days of my life. Years later, it had formed a certain narrative. So, I decided to go for it. One love story in the film is set in Delhi, now, and the other story takes place in the 1990s. These two are very different from each other. Yet, the essence of what you are looking for in a lover or a romantic relationship is the same,” Imtiaz had said.

Imtiaz Ali is primarily known for helming romantic dramas like Tamasha, Rockstar, Jab We Met and Socha Na Tha. Asked whether he would ever break away from the genre, the director said, “I want to have the ability and the freedom to do anything, any kind of film that I feel like as long as it is entertaining people. I will do something that I am most interested in, not because I want to change anything.”

Read all the updates about Love Aaj Kal.

'Imtiaz Ali has lost his touch'

User @RjHarshil posted on Twitter, “#LoveAajKalReview Looks like director has lost his touch , both the characters of the film sounds like Duniya bahot hi Kharab Hai. Out side world spoils you and that’s why you get confuse in life. #LoveAajKal very poor film.  2 Star Pan Kem Aapu Vicharu chu.”

'The only saving grace are Randeep Hooda and Arushi Sharma'

User @hungrymoon10 shared on Twitter, “#LoveAajKalReview #LoveAajKal #LoveAajKal2 The only saving Grace in the film are @RandeepHooda and @iamarushisharma. They both have performed naturally and have brought emotions. Sara Ali khan is just terrible, should be thankful for her privilege. #NepotismBarbie.”

“Kartik and Sara have a delightful chemistry that is adventurous in its own way; ‘#LoveAajKal’ is a hugely interesting watch!,” tweeted @Rcoolmovies.

User @cvk85 posted on Twitter, “@TheAaryanKartik Kartik had seen #FDFS #LoveAajKalReview Three different ages you rock bro. What a power-packed guy u have. More shine and Luck for you. Loved your performance.”

User @chhabra_13 tweeted, “Very deep and realistic. Though, not everyone's cup of tea. Glimpses of Tamasha. The script revolves majorly around Sara Ali Khan, and she has done well to carry it. Also, she looks cute in this one. #LoveAajKal #LoveAajKal2 #LoveAajKalReview #KartikAaryan #saraalikhan.”

'Unique in its own way'

“Have came across mixed reviews for #LoveAajKal and #ImtiazAli but I disagree. His films have a soul and unique in its own ways.There is a bit of Sufism in his films. #Tamasha had similar reviews but it left the audiences with a warmth. #LoveAajKalReview #KartikAaryan #SaraAliKhan,” wrote user @bollynews_ind on Twitter.

'Imtiaz Ali has lost his mojo'

User @Box_Office_new tweeted, “#LoveAajKal is a headache inducing  romantic film from #ImtiazAli who has clearly lost his mojo. Valentine's weekend might push it to a decent total, but there isn't  much scope later. Watch it in a theatre only if you are going with your partner. 1/5 #LoveAajKalReview.”

'Same twist to the old story'

User @Shubham26383793 shared on Twitter, “#LoveAajKalReview it's rely on same twist to the old story with BAD SCREENPLAY still the 90's love story is good with #AarushiSharma n @RandeepHooda r in top form @TheAaryanKartik n #SaraAliKhan looks good together but same cannot be Said for their performance #LoveAajKal."

“Watched this movie, it's very bad. First half you don't understand & second half you don't want to watch it. Sara Ali Khan needs to improve her acting skills, Kartik is overall good. My rating  0 / 5 #LoveAajKalReview,” tweeted user @BabuSaheb90.

"Mixed reviews is healthy as u can go and decide on which side you're yet do remember this is an Imtiaz' film so you have to be fully there and almost try to solve the puzzle which is my fav part in his films..Can't wait to watch #LoveAajKal," @fedy_1 wrote on Twitter.

Indian Express' film critic Shubhra Gupta in her review wrote, "If you had apprehensions about a brand new film being called by an old name, made by the same director, you were right. If you thought that despite this apparent lack of imagination, this 2.0 ‘Love Aaj Kal’ would fly, you were wrong. Imtiaz Ali’s latest version of romance in this-day-and-that age, is nothing but an incoherent mess."

Planning to watch Love Aaj Kal? Watch the trailer of Sara Ali Khan-Kartik Aaryan starrer first
'Randeep Hooda, you are the soul of it'

'Imtiaz Ali puts his heart and soul out there'

"Loved #LoveAajKal ! #ImtiazAli puts his heart & soul out there, unabashedly! Loved the CRAFT, the performances, the detailed sound design, edit, camerawork, production design! And so many friends have been part of it, my heart is SO HAPPY!!! @TheAaryanKartik #Sara ud83eudd70ud83eudd70" filmmaker Jyoti Kapur Das said via Twitter.

"#LoveAajKal Review: #ImtiazAli captured the complex relationship very well. @TheAaryanKartik  outdone himself, it was good to see him showing different shades in his 1990 character. @mysarakhan as Zoie is very relatable, some scenes, she over did it, but it was an honest attempt," wrote journalist Simran Singh.

Film trade analyst Girish Johar believes Love Aaj Kal is a well-planned release. He told indianexpress.com, “Love Aaj Kal has a fantastic buzz. The trailer and songs have been liked a lot. The genre of the film is romantic, and love is in the air with Valentine’s Day around the corner, so it is a fantastically planned release coinciding with the celebration of love. I am looking forward to a good start for the film at the box office.” The will be releasing in over 2500 screens and Girish pegged the film’s opening day collection at around Rs 9-10 crore. 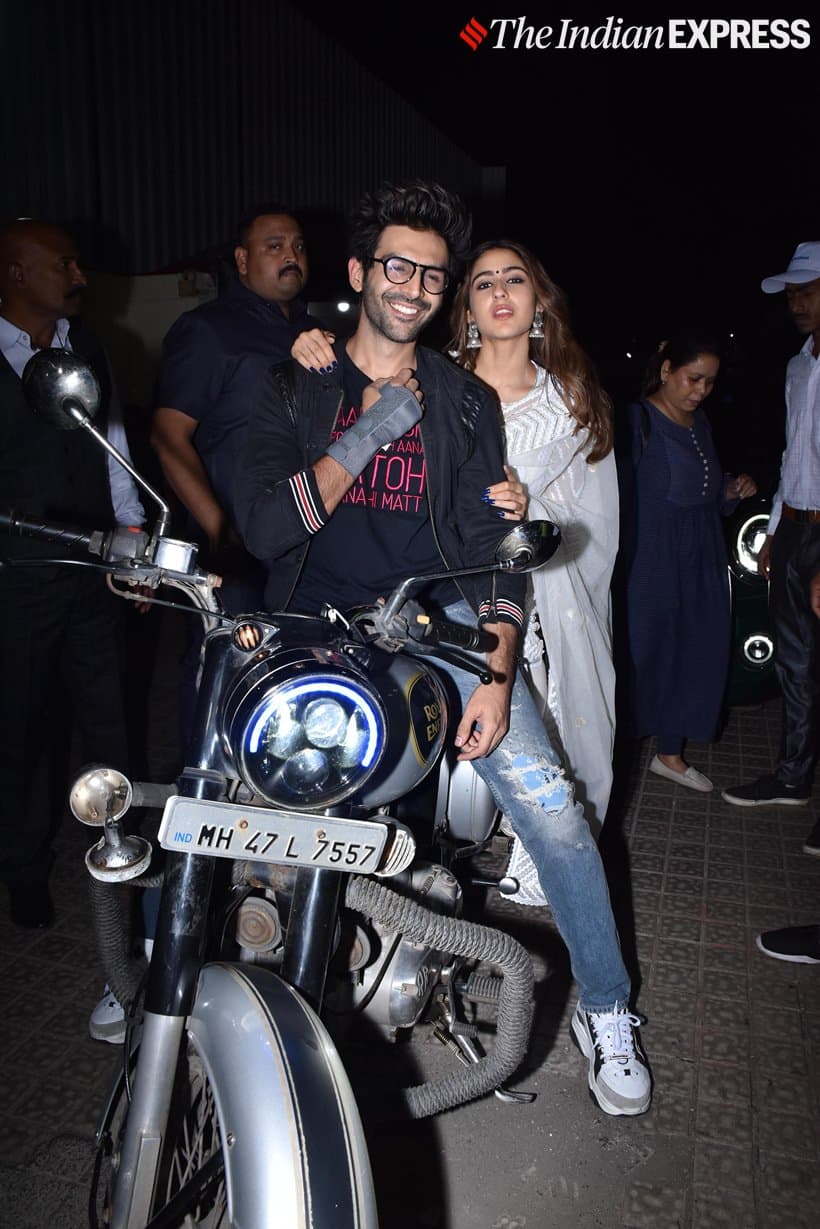 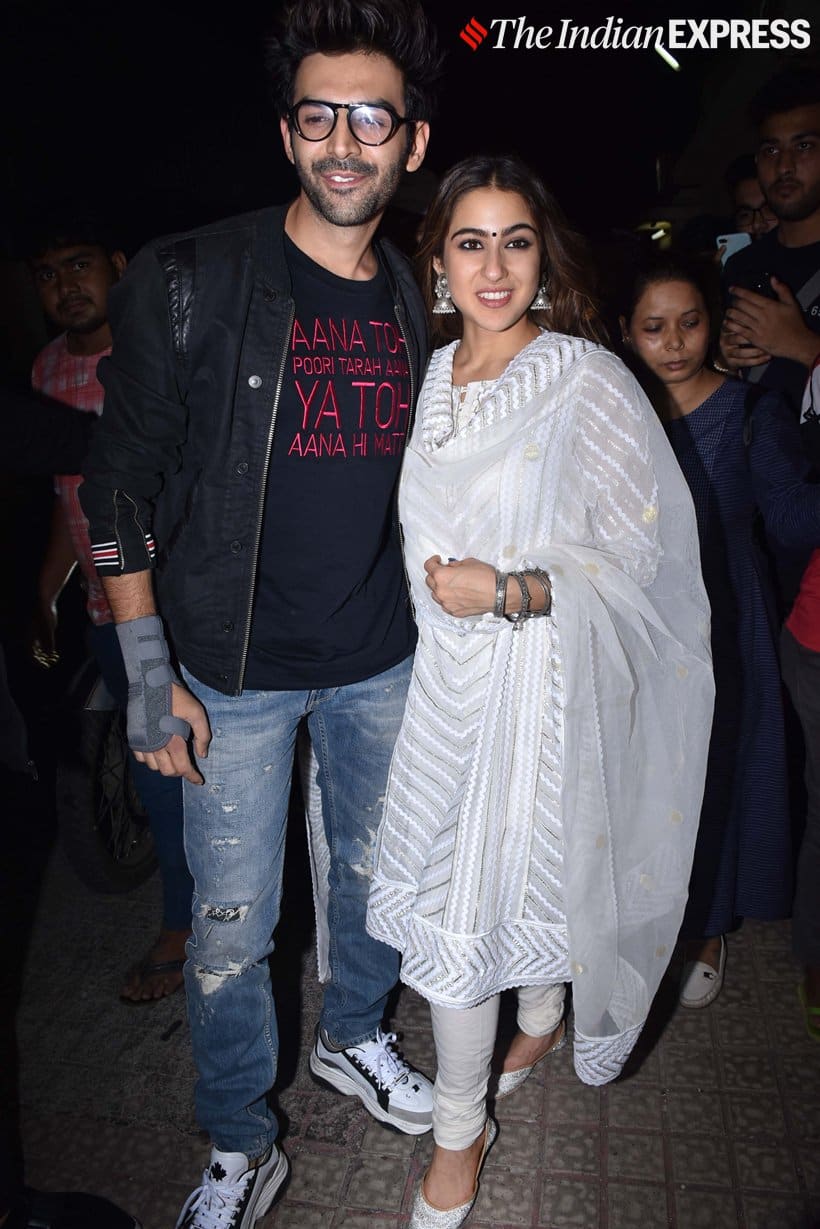 WATCH: In conversation with Sara Ali Khan and Kartik Aaryan
'Worth a miss'

"Imtiaz Ali’s characters are always confused about love. Sirjee it is time they get some clarity! #loveaajkal worth a miss," journalist Chandresh Narayanan said via Twitter.

'Kartik Aaryan is so nuanced and restrained'

Journalist Amul Vikas Mohan tweeted, "#LoveAajKal ought to be my boy @TheAaryanKartik‘s career-best performance. He’s so nuanced and restrained... it’s great to see him grow leaps and bounds in a span of merely nine years! Bravo brother, bravo."

'I am overwhelmed by Love Aaj Kal'

RJ Hrishikesh Kannan posted on Twitter, "I am overwhelmed by this movie #ImtiazAli So many lump in the throat moments. Brother I need to thank u for the sheer joy ur films have given me and movie goers thru the years. #LoveAajKal proves once again that ur a master auteur of the romantic film genre mere bhai."

Speaking about her character in the movie, Sara told indianexpress.com that Imtiaz Ali is a great teacher. "Through Imtiaz Sir, I have lived the experiences of the character. I am a student. Being with him was like being in an acting school. It's like an institution in itself. He teaches you how to feel those emotions," the actor stated.