Kargil Vijay Diwas is celebrated on July 26 every year to commemorate India’s victory in the 1999 Kargil War against Pakistan. On this day, we list all the Bollywood movies which have been set in the backdrop of the 1999 Kargil War. 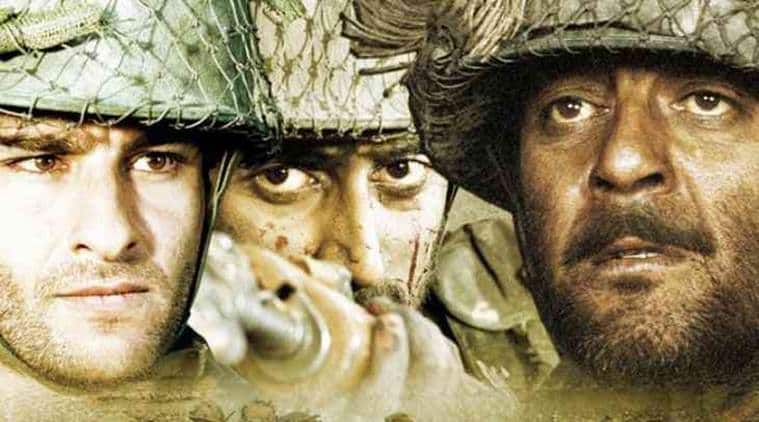 Bollywood filmmakers have been honouring the efforts of Indian armed forces in movies. The troops’ heroism, valour, camaraderie and suffering have always evoked many emotions in moviegoers. More often than not, people walk out of theatres with a sense of pride and tears in their eyes after watching the story of soldiers who make them feel safe at home while they themselves are away from their near and dear ones. And on the occasion of Kargil Vijay Diwas, we try to list all the Bollywood movies which have been set in the backdrop of the 1999 Kargil War.

Kargil Vijay Diwas is celebrated on July 26 every year to commemorate India’s victory in the 1999 Kargil War against Pakistan as it was on this day that the Indian Army had taken control of posts across the Himalayas in the Ladakh region of Jammu and Kashmir, after fighting for 60 days.

Check out the films which brought the movie buffs closer to the war heroes and instilled in them a feeling of pride:

The film directed by J.P. Dutta gave a peek into the life of Indian defence personnel Captain Vikram Batra, Subedar Yogendra Singh Yadav and Major Deepak Rampal who sacrificed their lives during the Kargil War. The film starring Sanjay Dutt, Ayyub Khan, Suniel Shetty, Saif Ali Khan and Abhishek Bachchan among others was based on Operation Vijay and the Battle of Tololing around the Line of Control. The film is one of the longest films in Indian cinema with a runtime of four hours and 15 minutes.

The Hrithik Roshan starrer, a favorite of 90s kids, is the story of the transformation of a carefree youngster into a dedicated and passionate soldier with only one goal – to conquer a peak for the Indian army in Kargil. The rock-climbing scene in the climax created history as it featured the highest crane shot taken at 18000 ft. Though the movie didn’t fare well at the box office, the Farhan Akhtar film has found takers over the years. A still from the movie Tango Charlie starring Ajay Devgn and Bobby Deol.

The film starring Ajay Devgn and Bobby Deol is an account of the lives of soldiers and their struggles as they stay away from their loved ones. The Mani Shankar film does not focus only on the war but also on how an army men’s life is a battle even when no real war is being fought with the enemy.

Bollywood celebrities pay tribute to Indian soldiers and martyrs on the occasion of Kargil Vijay Diwas.

"On this Kargil Vijay Diwas Saluting the courage, sacrifice and valour of our Armed forces . Forever indebted to them . Vande Mataram #KargilVijayDiwas," Mohanlal said via Twitter.

Deeply grateful for the sacrifice of our brave soldiers, says Kirron Kher

Deeply grateful for the service and sacrifice of our brave soldiers. Let’s celebrate our soldiers every day, including today. #KargilVijayDiwas pic.twitter.com/pnVJgAqlbN

Farhan Akhtar shared on Twitter, "Salute to our armed forces and in remembrance of all the brave hearts who were martyred defending our country. #respect #KargilVijayDivas"

We should remember their bravery and sacrifice everyday, says Anil Kapoor

Anil Kapoor tweeted, "We should remember their bravery and sacrifice not just today but everyday, paying my respects and homage to all the bravehearts who protected our nation during Operation Vijay. #TheRealHeroes #KargilVijayDiwas"

T 2879 - T 2879 -KARGIL VIJAY DIWAS .. saluting the Jawans for this historic victory .. paying homage to them that sacrificed their lives for the Country .. 🇮🇳🇮🇳🇮🇳🇮🇳🇮🇳🇮🇳🇮🇳🇮🇳🇮🇳🇮🇳🇮🇳🇮🇳🇮🇳🇮🇳 pic.twitter.com/wXOXBRQFx2

"I am humbled that my films are still being remembered by the audience on such an important day for our nation. Both my films Border and LoC were war films, which were loved by the audience then. It was just a small effort from my side to bring the struggle of us Indians to the silver screen. Both the incidents in the Indian history are very important and talk about our strengths," J P Dutta said in a statement.

Mohit Chauhan tweeted, "I salute the #defendersofmyborders the soldiers of our #Armedforces for their courage, bravery and their relentless pursuit of victory over the enemy. #KargilVijayDiwas #KargilWar #JaiHind #Jaibharat"

We owe it to them to be a better society, says Vivek Oberoi

"A salute to our martyrs Kargil Vijay Divas...We owe it to them to be a better society and a stronger nation," Vivek Oberoi said via Twitter.

Today is the 19th kargil vijay diwas ... as a tribute I’d like to share this #throwback picture of @juniorbachchan Abhishek & me from the film ! I will always be proud to be a part of #lockargil #jpduttafilm 🙏🏼 pic.twitter.com/hDNYlEh4yF

They were ready to die for our country, says Taapsee Pannu

Taapsee Pannu posted on Twitter, "I am sure they never wanted to fight...... But they were ready to die for our country. I would any day prefer to celebrate each n every day WITH them than this one day without them... Kargil Vijay Divas."

We will never understand the kind of sacrifices our soldiers make, says Sidharth Malhotra

Sidharth Malhotra wrote on Twitter, "We will never understand the kind of sacrifices our soldiers make to keep the nation safe. 19 years since we won the Kargil War #KargilVijayDiwas #IndianArmy #salute #JaiHind"

#KargilVijayDivas in honour of our brave soldiers who fought for us and continue to. #NeverForget

We taught Pakistan a lesson with an emphatic victor, says Hema Malini

Hema Malini shared on Twitter, "Today is the 19th Kargil Vijay Diwas when we taught Pakistan a lesson with an emphatic victory in a war they won't forget! Let us pay a tribute to our martyrs who laid down their lives for the country and helped to keep our flag flying high. Salute."

Shatrughan Sinha tweeted, "Solemnly remember the martyrs today on 'Kargil Vijay Diwas'. Salutes, Repects & Tributes to all our Faujis who are our shield & their sacrifices bring glory to our Armed Forces. God Bless! Jai Hind! #KargilVijayDiwas"

If we truly love our soldiers, give peace a chance, says Vishal Dadlani

'On #VijayDiwas, along with saluting our soldiers for their sacrifices & commemorating the hard-fought victory in Kargil, let's also take a moment to remember that so many lives were lost to the futility & stupidity of war. If we truly love our soldiers, give peace a chance,' music director-singer Vishal Dadlani said via Twitter.

Salute for giving up your lives to protect the country, says Anubhav Sinha

Mulk director Anubhav Sinha posted on Twitter, "I hate wars, but then sometimes it is inevitable to fight some. Kargil was one such. A war that was treacherously imposed upon us. We Won, but after losing so many precious lives. Salute for giving up your lives to protect the country. #KargilVijayDiwas."

Thank you for your sacrifice & bravery, says Preity Zinta