Ahead of Kabhi Khushi Kabhie Gham completing 20 years of release, we revisit how the Karan Johar directorial's all-star cast made it one of the biggest films in Hindi cinema. A dream cast is not something Bollywood gets to flaunt often. Blame it on the calendars of our superstars or the budgetary constraints for filmmakers, we’ve until now seen only a handful with an exceptional cast. One such, unarguably is Kabhi Khushi Kabhie Gham.

Back in 2001, when the first trailer of K3G hit our television screens, one could only watch in awe — Amitabh Bachchan, Jaya Bachchan, Shah Rukh Khan, Kajol, Hrithik Roshan and Kareena Kapoor, all squeezed up in one frame, in a movie helmed by one of the most sought after directors, Karan Johar. Almost 20 years later, nobody has managed to replicate such an ensemble. Kabhi Khushi Kabhie Gham was clearly among the biggest films that year. In fact back in the day, Karan Johar thought he was making “the biggest film in Hindi cinema since Mughal-e-Azam”.

“I made the same film as Kuch Kuch Hota Hai, that’s what K3G was,” the director said in Audible Suno’s show Picture Ke Peeche last year. He further shared that he took the storyline of Kabhi Kabhie and the family values of Hum Aapke Hain Koun “and made this mush of a film.”

2001 was an era when we barely got updates about a film’s shooting schedule or BTS stories. So K3G’s arrival was a landmark. The last movie that probably fit the bill was Rajshri Productions’ Hum Saath Saath Hain (1999).

K3G revolves around an Indian family that develops cracks after the adopted elder son marries a girl belonging to a humble background. How the younger son ends the misunderstanding between his father and brother forms the crux of the story.

K3G not just brought back SRK-Kajol on screen, it even had SRK’s then 4-year-old son Aryan Khan in a cameo. While Hrithik and Kareena received a thumbs-up as a pair, the Bachchan couple’s adorable romance was a definite attraction for the audience.

But despite the popularity K3G went on to achieve over the years, it was panned by critics then. The movie even missed out on awards. That’s because 2001 was a highly successful year at the box office, but a very competitive one for production banners and distributors.

Kabhi Khushi Kabhie Gham does stand as the highest grosser of 2001, but close in the list were other blockbusters — Gadar: Ek Prem Katha, Lagaan and Dil Chahta Hai. Infact, KJo confessed in the same aforementioned audio show, that the two Aamir Khan films – Lagaan and Dil Chahta Hai changed his perception. He called K3G “the single biggest slap in my face and my biggest reality check.”

And with Lagaan and Dil Chahta Hai sweeping through major awards and reviews, K3G’s performance was a shocker for Karan. 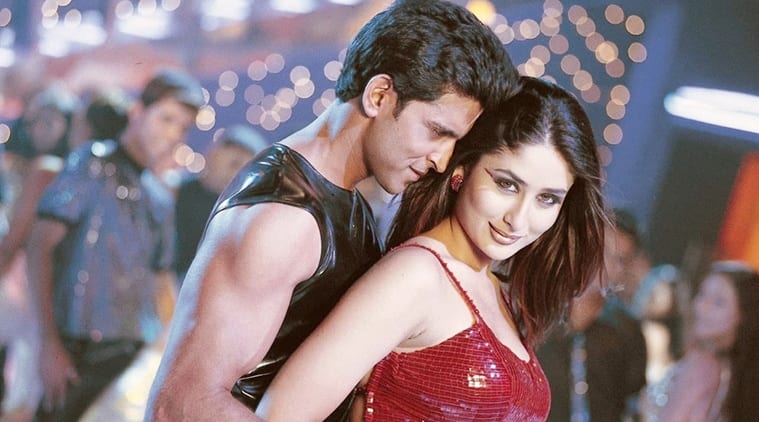 Kareen Kapoor was to debut with Hrithik Roshan in Kaho Naa Pyaar Hai. They were later cast in Yaadein which released months before Kabhi Khushi Kabhie Gham. (Photo: Dharma Productions)

There is no denying that Kareena Kapoor‘s character Poo, a self-obsessed, bold and loud fashionista, has a separate fan base today. Her dialogues, punch lines and shenanigans from P.H.A.T. to ‘Whateva’ became a part of our daily lingo before she gave another memorable character in Geet (Jab We Met – 2007).

Karan who created Poo, called himself one! “I am Poo, that’s who I am, I wrote all the lines, picked the clothes, everything,” he said, adding “but at the time only Bebo (Kareena) and I loved her character.”

There are several trivia attached to the film. We know about Rani Mukerji’s extended cameo in K3G. But even Abhishek Bachchan was to appear as a guy who refuses to accompany Kareena’s Poo to the prom. His scene got chopped on the editing table. Infact, John Abraham was approached to play Kareena’s friend Robbie. He refused and the tiny part was ultimately played by actor Vikas Sethi.

Waheeda Rehman was signed to play Amitabh Bachchan’s mother. But the veteran actor left the project after her husband’s death in 2000. Senior actor Achala Sachdev finally did the role.

Ahead of Kabhi Khushi Kabhie Gham’s 20 years, Karan Johar on Tuesday shared a post on Instagram. In the caption he recalled how the blockbuster has stood the test of time, and continues to live on with its memorable music, dialogues, cast and fashion.

“It’s going to be 20 years and I still feel the euphoria of having this film release on the big screen and people going to watch it. But I feel the impact sank in for me much later. And that feeling hasn’t stopped ever since. I see all the videos, all the occasions this film’s music is a part of, all the dialogues people have now inculcated in their daily life and of course – the fashion!! At the heart of it, I also see that after all this time – it’s all about loving your…family! Celebrate #20YearsOfK3G with us this entire week and stay tuned because we have a lot in store for you!,” Karan wrote.