Gold movie review and release highlights: Gold will clash with Satyameva Jayate at the box office.

Starring Akshay Kumar in the lead role, Gold is the story of the Indian field hockey team winning India’s first Olympic gold medal as an independent nation. The film is inspired by the real story of India winning against Great Britain in London at the 1948 Olympics. Directed by Reema Kagti, the film brings together an ensemble cast of Mouni Roy, Kunal Kapoor, Amit Sadh and Sunny Kaushal. This film marks the Bollywood debut for television actor Mouni Roy.

In the film, Akshay Kumar plays Tapan Das, who brings together a match-winning team. Gold is releasing on Independence Day and the release date is just perfect for the film.

This is Akshay Kumar’s second release in 2018 followed by PadMan.

What makes the film worth a watch, despite these problems, are the flashes of well-done humour, the skirmishes between the players, and the rousing finale. When the ‘tiranga’ went up, I had tears in my eyes, and I cheered, as did everyone else in the theatre.

Kunal Kapoor said, "Reema (Kagti) called me, and when I heard the script, I instantly fell in love with it. I play Samrat, whose only purpose in life is to win a Gold for India as a free nation. He has already been the captain when the team played as a British colony. He is passionate and single-minded towards his dream. And he knows he can’t play anymore and so turns coach for the team."

Read More | Gold actor Kunal Kapoor: For me, patriotism means contributing to the betterment of society and nation 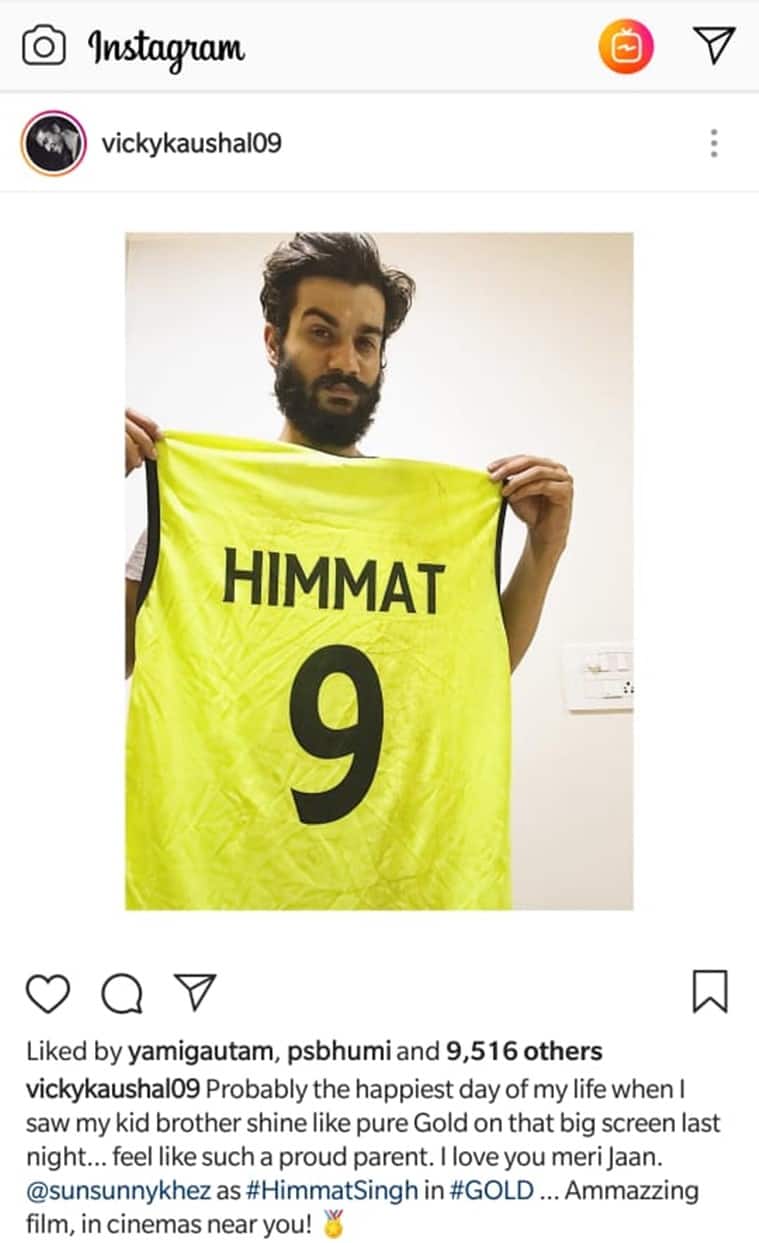 Reema Kagti is skilled enough to give us a film with all its moving parts in fine working order, even if it is bereft of nuance. Akshay Kumar plays the wholly fictional Tapan Das, the man who has been closely involved with Indian hockey for years.

Akshay Kumar has a finger on the pulse of the box office right now. Before anyone else, he understood the inclination of the audience towards patriotic cinema and in no time became the mascot of the genre. His association with patriotic films brought him the title of ‘new age Manoj Kumar’. What made Akshay stand apart from his contemporaries was the absence of jingoism in his new age patriotic movies like Holiday: A Soldier Is Never Off Duty, Baby and Airlift. His movies focused on dealing with the enemies present within the system and are a hindrance to the growth of the nation.

Read More | Before Gold, a look back at Akshay Kumar films which stoked patriotic fervour

Mouni Roy at the screening of Gold Is Akshay Kumar's character in Gold based on this sports icon?

Independent India’s first gold medal came from a field hockey team where the Indian team defeated Great Britain in the finals. Tapan Das, played by Akshay Kumar, seems roughly inspired by the man who is still regarded as the man who started the Olympic movement in India, Moin-ul-Haq.

Read More | Is Akshay Kumar’s character in Gold based on this sports icon?

Here's why you should watch Gold

With Akshay Kumar in the lead role, this sports drama based on real events is out in the theaters today. Here are all the reasons as to why you should catch it today.

Akshay Kumar has built a reputation of being the modern day Manoj Kumar. His recent choice of films has been in sync with patriotism and promoting social causes. With films like Padman and Toilet Ek Prem Katha, he worked towards a hygiene conscious society. With Airlift, he took an unfamiliar story to the masses, and with Gold, he’s attempting to do something similar.

2. Based on true events

Films inspired by historical events sometimes give us a glimpse of the past and with Gold, we can expect the same. Gold is based on the events leading up to India’s first Olympic gold medal as a free country. The true events of the time must be different but the makers have tried to present the essence of the era with this film.

3. In spirit with Independence Day

Gold releases on August 15 and in many ways, this is the perfect time for its release. The film talks about India achieving a milestone as a free nation and what better occasion to celebrate it than India’s 71st Independence Day.

Vineet Kumar Singh said, "I play Imtiaz Shah, who has a very distinctive personality in the film. To be honest, the script is the real hero of Gold. It is such a strong and well-researched story. I would have happily let go of five projects for this. The film depicts the journey of Imtiaz and the team from 1936 to 1948. In the 12 years, a lot had changed – from the World War to India getting independent. These incidents become a strong reason behind each character’s personality. And it would be really interesting for the audience to experience it. Also, I have always wanted to work with Reema Kagti. So, it was an added bonus."

Read More | Gold actor Vineet Kumar Singh: My father showed me the door when I told him I wanted to be in Bollywood

Here's what the audience is saying about Gold

Indianexpress.com's Anvita Singh said, "Akshay Kumar starrer Gold is a generic Bollywood sports drama that shines in a few moments, thanks to its able supporting cast and exquisite cinematography by Álvaro Gutiérrez, who is also responsible for Zoya Akhtar's Zindagi Milegi Na Dobara's lovely camera work. Amit Sadh and Sunny Kaushal charm as passionate and hot-headed hockey players, but apart from that, the movie doesn't have anything new to offer."

Arjun Bijlani tweeted, "All the best @Roymouni and @akshaykumar sir for #GoldMovie .wishing u all the success. This is jus the beginning and I’m sure there is no looking back now."

Sunny Kaushal said, "Everyone keeps talking about pressure and competition. But I consider it a blessing to have him as a brother. I learn so much from him. His journey and hard work inspires me to break boundaries. And it goes without saying that there is no scope of sibling rivalry between us. "Read More | Gold actor Sunny Kaushal: Being Vicky Kaushal’s brother is not pressure but a blessing

Lipstick Under My Burkha director Alankrita Shrivastava tweeted, "And #Gold is such an engaging film! I loved its layered insight into team dynamics, and what makes a player great. The film is thrilling, emotional and fun❤ And @sunnykaushal89 delivers a breakout performance! Congratulations @kagtireema @ritesh_sid @FarOutAkhtar #GoForGold"

Mouni Roy said, "It’s an important, relevant film. You won’t be disappointed. You will understand and know and get to hear a story, a journey of a man uniting and forming an entire team at a time when our country was all over the place, bringing them together and actually going to Great Britain and winning the gold for our nation."

Trade analyst Girish Johar said, "The big holiday of Independence Day will help Gold rake in moolah on day one. Releasing in over 2700 screens, the movie is expected to earn Rs 20 crore on Wednesday. The Akshay Kumar factor and the patriotic feel that is promoted well through the songs and trailer of the film will attract movie buffs to theatres"

In an exclusive interview with indianexpress.com, Akshay Kumar said, “It was not much of a tough task or anything because of the kind of characterisation she (Reema Kagti) had already created it. Plus learning the Bengali dialect was also an easy thing because I’ve worked in Kolkata for 2-3 years, and then she had given me a coach too. So, things went very smoothly, not much of a problem.”

"@akshaykumar bags a ‘gold’ with #Gold the movie. What a show Mr Khiladi!!! You doing justice to history bro. Absolutely loved the movie #IndiaTurnsGold #GoldInDelhi," Gautam Gambhir said via Twitter.

On the fence about watching Gold? Check out the trailer of Akshay Kumar's film
Virender Sehwag on Gold

Virender Sehwag shared on Twitter, "Thank you @akshaykumar for the special screening. I am totally #SoldForGold. Wonderful performances and a really inspiring movie. May it do well and inspire many."

My feeling of patriotism just got multiplied by infinity, says Sonal Chauhan

Vicky Kaushal posted on Twitter, 'I laughed, I hooted, I clapped, I cried. Stunning film in every department. Many congratulations to the entire team of #Gold for such an amazing film. @kagtireema @akshaykumar @ritesh_sid @FarOutAkhtar @TheAmitSadh @ItsVineetSingh @kapoorkkunal @sunnykaushal89 घर लाए आप Gold!'