Pathaan and beyond: Decoding Brand Shah Rukh Khan and why he is still the undefeated Badshah of Bollywood

Thirty years and counting: As superstar Shah Rukh Khan debuts his new action avatar in Pathaan today, we take a deep dive to understand Brand Shah Rukh Khan, its longevity and the need to reinvent. 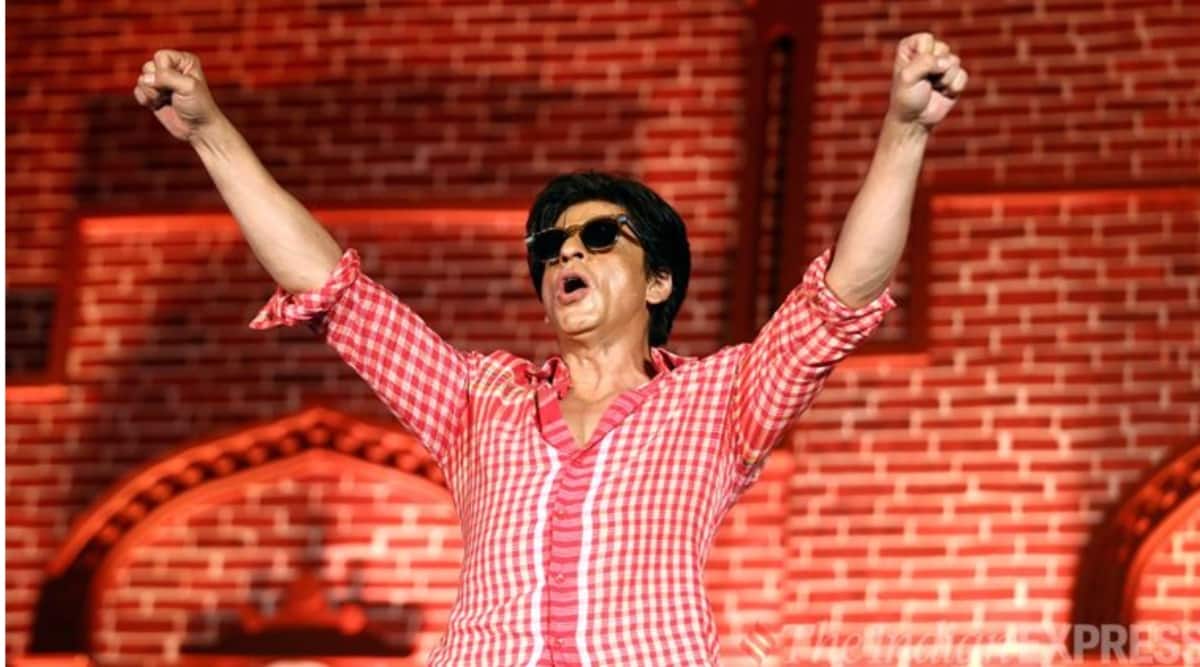 Even after staying away from screens for four years, Shah Rukh Khan continues to rule audiences' hearts. (Photo: Express Archive)
Listen to this article
Pathaan and beyond: Decoding Brand Shah Rukh Khan and why he is still the undefeated Badshah of Bollywood
x
00:00
1x 1.5x 1.8x

Four years is a long time in this age of short attention spans and ever-moving images on handheld screens. To stay away from his favourite playing field, the 70 mm ‘big screen’, and return with so much fanfare with Pathaan is no mean feat. Shah Rukh Khan appeared to have done it effortlessly and with charm to spare.

Amid largely positive reviews for Shah Rukh’s ‘comeback’, the film is expected to hit the Rs 50 crore mark on opening day alone. According to industry tracker Sacnilk, Pathaan will comfortably overtake Happy New Year’s Rs 44 crore debut figure, and become SRK’s top opener of all time. As per industry predictions, the film will cross Rs 200 crore in the first five days. Pathaan has released in over 100 countries, which is a phenomenal number.

But what is at stake for King Khan when it comes to Pathaan? Will its fate also have an effect on Brand SRK? Will he manage to win back his throne? Indianexpress.com decided to dive deeper and came up with answers which confirm the longevity of the man often referred to as India’s last true superstar.

What is brand Shah Rukh Khan?

He is known for many things — some love him for his charm, some for his wit, and many for his on-screen romance. Be it his humanity, business mind or killer attitude, the man is a jack of all skills, and masters quite a few of them. But what is ‘Brand Shah Rukh Khan’? “It is an attitude, what I call Shahrukhism,” brand specialist Harish Bijoor shared with us.

In Premium |Ahead of Pathaan, Shah Rukh Khan’s rise and fall at box office, in numbers

He went on to say that Brand SRK is India’s superstar, and now it’s time to see whether this attitude is a reality or something that used to click in the past. “I am looking forward to new symbolism that the film and SRK will contribute to the market. The era of Don and Raj symbolism is over. It’s time to see how SRK has reinvented himself.” Business and marketing strategist Lloyd Mathias believes that the one unique quality of Shah Rukh Khan is how ‘endearing’ he is. He stated that even when he has been a sensation among women for his looks and intelligence, the fact that he has played a wide range of characters has made him popular among a large sphere of people. “The older people love him right from his Fauji days, he’s known for his romance in the 90s. And then he has also done serious roles when it comes to films like Chak De! India. He has traversed a large range of cinema audiences. He’s pretty much gone through it all, and all of it has significantly added to the SRK aura,” he shared.

Sharing a rather heartwarming reference, Mathias said that back in the 70s, when people would step in to Bombay, they would first ask the cabbie to take them to Aashirwad, Rajesh Khanna’s house. From the 80s to even today, people want to visit Jalsa, where Amitabh Bachchan resides. “And in the last two decades, SRK’s Mannat has become the go-to destination for which, you don’t even need an address. That has cemented his position as an iconic star, almost like the cultural star for the generation,” he said, adding that his involvement in IPL has also played a significant part in making his journey solid. “The controversies or the noise has come due to the polarisation in India and also because, with social media, everyone can take it on a public platform. However, all this has proven the longevity of his brand. He has endeared all age segments and that’s what will continue to strengthen his position in the industry.”

For fans, on the other hand, brand SRK means ‘unshakeable’. Rahil Mohammed, founder of SRK Fanclub Pune shared how he realised with time that even the negativity around SRK has always worked in his favour. He shared, “It’s too strong to get affected. Look at the controversy around Pathaan or even Besharam Rang. The PM had to intervene and stop his party members from commenting on films. The song became a hit in the first week, and now we are waiting for the film to rock cinema halls. Even theatres that were vandalised a few days back are already sold out today.”

What is at stake with Pathaan?

Given that SRK has been away for so long, has the brand equity been affected? For Harish Bijoor, the break is not enough to kill the aura of Shah Rukh Khan. He also reasoned that out of the four years, two were lost during the pandemic. The brand consultant said, “I don’t think his brand has been affected at all. During Covid-19, every big star’s brand got battered, as we saw so many of them moving to the small screen. And two years is not enough to kill his aura so the brand has not been beaten. If at all, I think the curiosity has only added to the appeal. A lot actually depends on Pathaan, and thus all of Bollywood, including his nemesis, should be backing his film.” Director Maqbool Khan (Khaali Peeli) believes Pathaan can bring much-needed positivity to the industry. “It’s not only about Pathaan, there’s always a lot at stake for every superstar of that level. Everyone would want their film to do well. Hence, this is not a special case, it’s just another film for the actor. However, given the grimness that has engulfed Bollywood, everyone is looking forward to celebrating cinema with Pathaan.” He added that he expects the film to do commercially well but will judge its merit only after watching it.

Lloyd Mathias also said that Pathaan release is an important one for SRK as he has failed to exactly set the box office on fire with his last few films. He shared that he thinks this would do good, partially because of the controversies and the news it made in the last few months. “It all added to the mystique. SRK is coming after a long time and be it the song, or his call to the Assam CM at 2 am, it has added to the buzz. SRK has classically enhanced his brand and become the iconic star of our generation. Just one more blockbuster will enhance his overall appeal.”

Most fans dismissed the negativity on social media about Shah Rukh Khan will have an impact on Pathaan. They shared how their focus continues to be on spreading smiles and love, just like their idol. Social media experts also suggest that even controversies work in a brand’s favour today, as opposed to a deafening silence or ignorance. 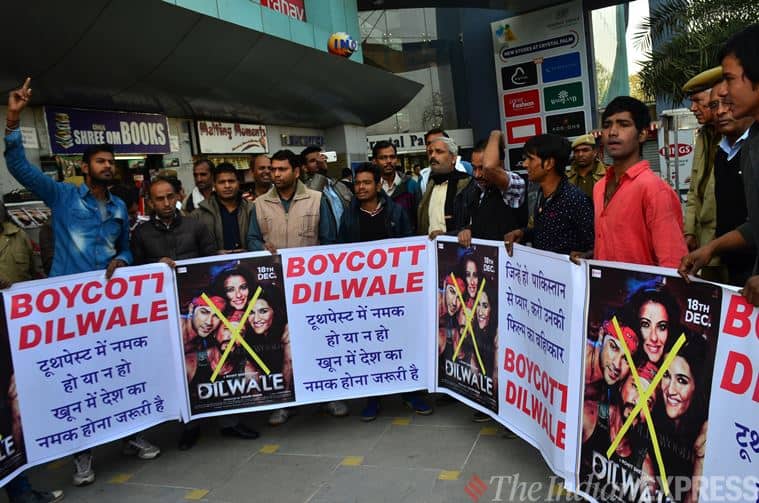 Harish Bijoor pointed out that there are different kinds of noises on social media — bots, an individual with an agenda and real viewers on a film. He shared that movie lovers are not much of an issue, as it’s always a 50-50 deal. However, he did mention that all of it does add to the noise. “Given how SRK is a marketing guy, all the noise will build up marketing equity for Pathaan.”

Maqbool Khan also added that Pathaan’s pre-booking is a proof that the negativity is only on social media. He added, “Pathaan has shown that these boycott calls cannot affect a film. It’s still subjective, and I think people are now bored of this negativity.” Another filmmaker said that while the trends may affect a film’s business, it’s marginal as the footfalls are decided by content. They shared the example of Brahmastra, which managed to break many records despite trolling on social media.

Shah Rukh Khan, earlier this year, was ranked third in a list of richest actors in the world, released by World of Statistics. Ahead of Tom Cruise, SRK’s net worth is said to be $770 million, according to the list. According to Duff & Phelps Celebrity brand evaluation report, his ‘brand value’ was calculated at $46.3 million in 2021.

The actor, over the years, has been the face of 40 brands including Dish TV, Hyundai, Lux, BYJU’S, Reliance Jio, LG TV, Pepsi, Thums Up, Denver, ICICI Bank, Fair & Handsome among more. He has also been the face of Dubai tourism, and was announced as the brand ambassador of West Bengal. However, given his absence from the big screens, it was inevitable that his brand value and endorsement deals would slip. 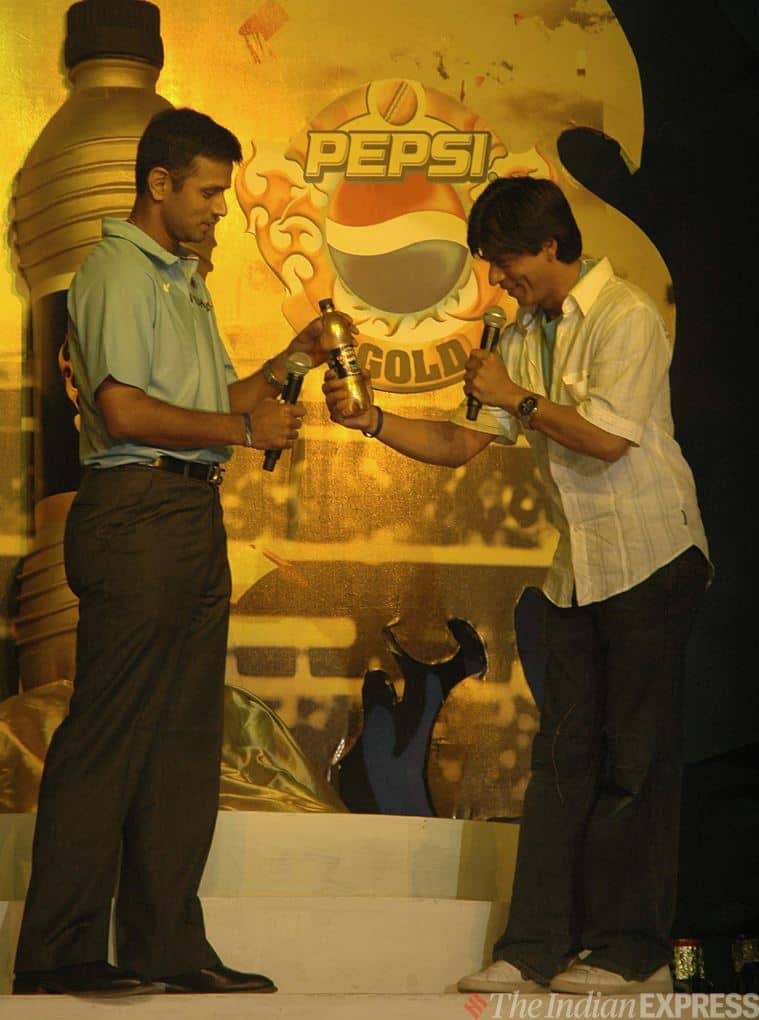 Shah Rukh Khan and Rahul Dravid during the launch of the limited edition Pepsi Gold in 2007. (Photo: Express Archive)

Mathias shared that over the past years, brands have been circumspect when hiring a movie star as brand ambassador given the controversies. “It’s not so much with cricket stars, as they have had a good run. With actors, everyone has got a point of view or some are associated with certain thought process or beliefs. Like Akshay Kumar or Anupam Kher are considered close to the ruling dispensation. It is only Big B who has pretty much sailed through it all. Quite a few movie stars, for whatever reasons, have been in the headline and thus have made brands circumspect. Deepika Padukone to an extent, certainly Aamir Khan and even Shah Rukh. So it’s a reality that we have to acknowledge.”

Could age also be an important criteria here, with brands choosing a younger face, and the brand guru replied, “Yes, Shah Rukh may not be as active but he has always sought to reinvent himself. While people were expecting him to play an older man, he’s built a six-pack and is back with an action drama. In a sense, he’s fairly out there. He is not very well-guarded and always happy to share his point of view. I think that is why his appeal is so endearing. It’s like ‘what you see is what you get’. What you see on the balcony of Mannat, is what you will see if you bump into him at the airport. Nothing is staged, and that’s one factor that sets him apart.”

While Pathaan kickstarts the year for Shah Rukh Khan, he has two more releases — Jawan and Dunki in the pipeline. Fans say that the excitement and buzz will be the same, if not more, during the release of his next films.

Brand expert Harish Bijoor, however, cautions that one out of these three has to work at the box office to keep SRK in business. “2023 typically for him is a year in which he either survives or says goodbye to Bollywood. Out of the three big films, two or at least one has to click. He is a comeback star and it will take just one big hit to change things.”

Javed Akhtar shares how poetry influences his life with Shabana Azmi: ‘When our basic values are common…’