De De Pyaar De trailer highlights: Ajay is caught between a rock and a hard place in this rom-com

Ajay Devgn’s upcoming release De De Pyaar De, also starring Tabu, Rakul Preet Singh and Jimmy Shergill in pivotal roles, will hit theaters on May 17. Before that, the makers released the trailer of the romantic comedy on the occasion of Ajay’s 50th birthday today. Helmed by Akiv Ali and jointly produced by Bhushan Kumar, Krishan Kumar, Luv Ranjan and Ankur Garg, the film brings Ajay and Tabu together after four years. The two shared screen space in 2015 film Drishyam.

The first poster of De De Pyaar De generated a lot of buzz as it featured Ajay riding on two cars simultaneously. It reminded cinephiles of his debut film Phool Aur Kaante where he entered the frame on two bikes.

Ajay Devgn shared the poster with the warning, “Don’t try this at home! 😝#DeDePyaarDeFirstLook. In cinemas 17th May.” Also, after the release of the poster, ‘Split Like AJ’ challenge started trending on social media.

Read all the updates about De De Pyaar De.

'All the best for De De Pyaar De' 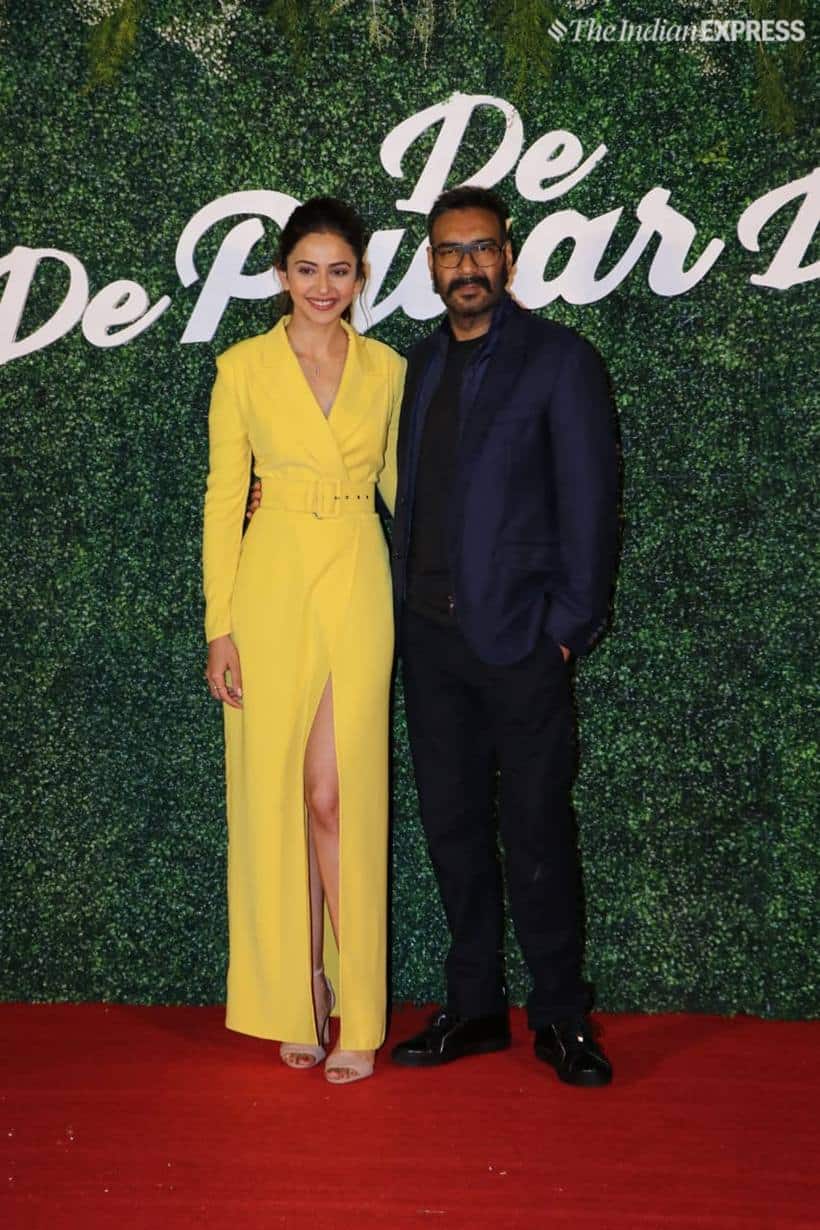 The makers of romantic comedy De De Pyaar De released its trailer on the occasion of Ajay Devgn's 50th birthday. Present at the trailer launch was the cast of the film including Ajay Devgn, Tabu and Rakul Preet Singh.

A middle-aged man in love with a girl almost half his age – upcoming film De De Pyaar De’s premise is nothing to write home about, but it is the perfect comic timing and the casting of actors Ajay Devgn, Tabu and Rakul Preet Singh that makes this Akiv Ali directorial seem like an easy-breezy mass-entertainer.

On the occasion of Ajay Devgn’s 50th birthday, the makers of De De Pyaar De launched its much-awaited trailer, which is high on catchy lines and witty situations.

Indianexpress.com's Komal says, "Full of cliches, De De Pyar De looks like a mass entertainer. The catchphrases and jokes are worth the laugh. The love story of a middle-aged man and a young woman might turn out to be a light watch. Tabu is looking fabulous. She is doing comedy with a straight face, which makes her fun."

"I will do what I do always, and I won't tell you what I do. But there won't be a party. I also don't cut birthday cakes, so I won't cut one even today," says Ajay Devgn.

"De De Pyaar De is a fun love story. It is a fun film. I don't even know if I have done this kind of film before. But I have had fun doing this film," says Ajay Devgn.

"This is not the right platform to discuss this. All I want to say is this film was complete much before the allegations," says Ajay Devgn.

Luv Ranjan on misogyny in his films

"I have been asked this so much. I think we have had these movies, and they have been very successful. I think I have had some strong female characters in my films. There has been confusion between good female roles and strong female roles," says De De Pyaar De producer-writer Luv Ranjan.

Ajay Devgn on the short shelf life of female actors

"I don't think it is true anymore. It used to be that way in the earlier generation. But now things have changed. See, we have Kajol, Tabu and so many of them," says Ajay Devgn.

Tabu on older women and young men concept in films

"I don't think it has not been attempted. We have done that. It has been attempted all over the world. The society's choices and ways reflect in the films. Films don't happen out of alienation," says Tabu.

"I am not the fittest actor. I think all my contemporaries are fit. It was a conscious decision that I wanted to be fit always so that I can keep doing what I have always done, and do it better," says Ajay Devgn.

"Age is not about the number. It is about how you feel," says Ajay Devgn.

Rakul Preet on working with Ajay Devgn and Tabu

"I share great chemistry with Ajay Devgn and Tabu. It was amazing," says Rakul Preet.

Ajay Devgn on working with Tabu

"We have spoken so much about each other that there is nothing left to say. But it is always fun to work together," says Ajay Devgn.

Tabu on working with Ajay Devgn

"It was great. We laughed so much while shooting for this film. I have known him for fifty years. It is always fun working with Ajay," says Tabu.

Ajay Devgn on his famous split

"In other films, it was a physical split. In De De Pyaar De, it is an emotional split as there are two girls," says Ajay Devgn.

"There is no plot in this film. There is only masti," says De De Pyaar De director Akiv Ali.

Ajay Devgn has already delivered a hit in 2019. His madcap comedy Total Dhamaal, also starring Madhuri Dixit, Anil Kapoor, Riteish Deshmukh and others, earned over Rs 150 crore. After De De Pyaar De, he has Taanaji: The Unsung Warrior and Bhuj The Pride Of India in his kitty.