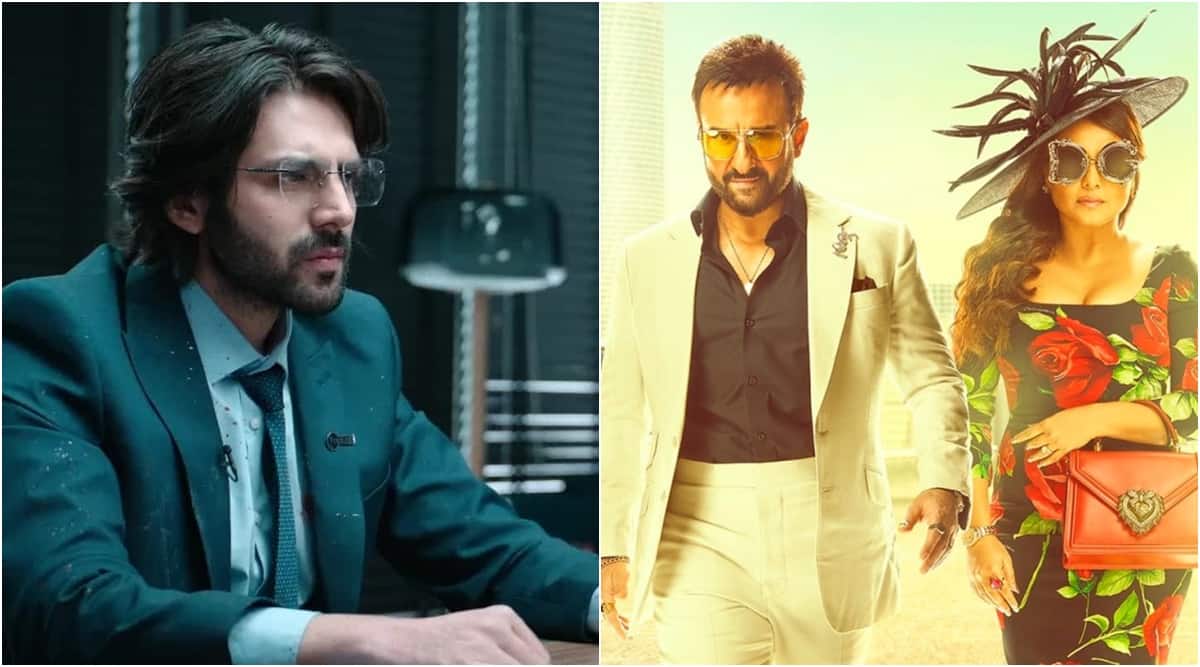 Starring Rani Mukerji, Saif Ali Khan, Siddhant Chaturvedi and Sharvari, Bunty Aur Babli 2 releases in theatres on Friday. Directed by Varun V. Sharma and produced by Aditya Chopra, Bunty Aur Babli 2 is a sequel of the 2005 film that starred Rani Mukerji and Abhishek Bachchan. This time, a new set of Bunty-Babli are out conning people so the original cons return to end the mess. Pankaj Tripathi also stars in the film.

The thriller is directed by Ram Madhvani. Based on the 2013 film The Terror Live, it stars Kartik as a journalist named Arjun Pathak who receives a threat after he exclusively interviewed a terrorist who blew up a bridge. The film also stars Mrunal Thakur and Amruta Subhash in prominent roles.

Unlike Bunty Aur Babli 2, which is releasing in the theaters, Dhamaka is getting an OTT release on the streaming service Netflix.

In an earlier statement, Bunty Aur Babli 2 star Rani said, “Not only am I getting to play a character like Vimmy who I have loved and related to always and am I working with Saif after years, but what’s giving me abundant joy is that Bunty Aur Babli 2 is the first film of mine that Adira has seen and thoroughly loved.”

“Nothing can beat this moment for me and my career. It was amazing to see her reaction to the film and what I have done on screen. She was laughing and rolling watching the mad comedy that we have done. I‘m so happy that I could make her laugh. It fills my heart with so much happiness. She had the best time and it means the world for me,” she continued.

Trade analyst Girish Johar spoke to indianexpress.com about the film’s box office performance and said it is expected to have a “decent” opening. “We are slowly limping back to normalcy, coming out of the pandemic, with the vaccination going in higher and the norms are being relaxed. Having seen that and the previous films (BellBottom, Sooryavanshi) also doing sufficiently well at the box office, I believe that the chance of Bunty Aur Babli 2 to do well is pretty much high at the box office. It all depends on the content, and how it is received, the reviews and feedback. Having said that, the trailer has generated much curiosity, and the first Bunty Aur Babli did pretty well.”

On the occasion of Kartik Purnima, Kartik Aaryan was swarmed with love and visited Siddhivinayak temple. His fans also shared videos and messages for him with the trending hashtag. 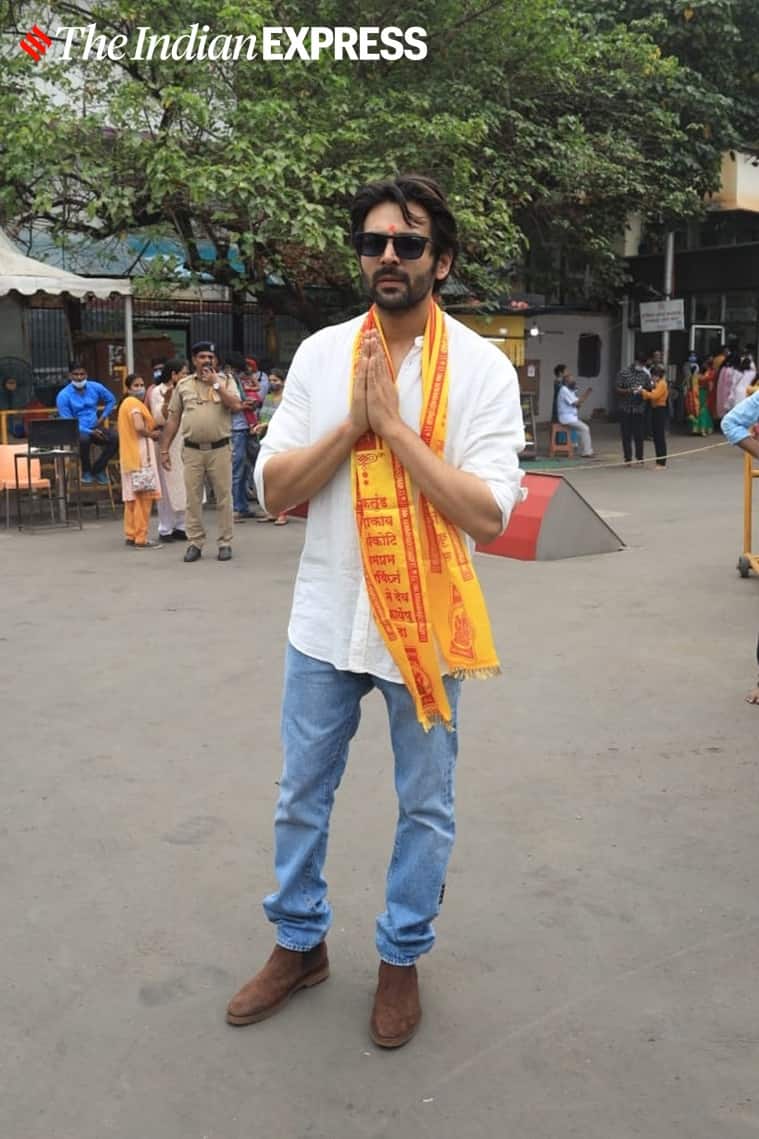 Dhamaka is 'a crackerjack thriller with a heart'

Subhash K Jha tweeted, "#Dhamaka lives up to  its name ..A crackerjack thriller with a heart , balls a conscience and a stellar awards worthy performance by @TheAaryanKartik."

'Pankaj Tripathi is the highlight of Bunty Aur Babli 2'

Kartik Aaryan: Feeling blessed with all the love coming from the industry

Feeling blessed with all the love coming from the industry ❤️
Can’t wait for the fans to watch it!! 🙏🏻 #Dhamaka now LIVE on Netflix! pic.twitter.com/HPrAt9v2xt

Kartik Aaryan shared on Twitter, "Aaj kaan mein sirf Thank You bola. Ganpati bappa Moriya. Feeling blessed with all the love coming from the industry. Can’t wait for the fans to watch it!! #Dhamaka now LIVE on Netflix!" 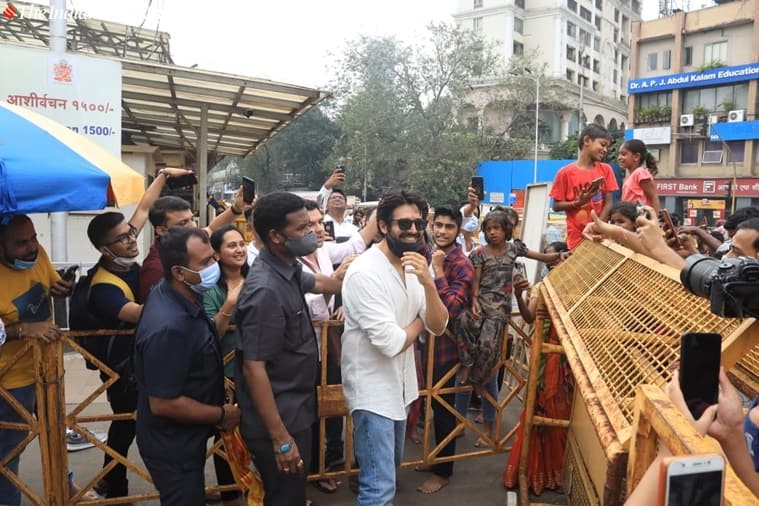 Sumit Kadel shared via Twitter, " #BuntyAurBabli2 - ⭐⭐⭐Clean family ENTERTAINER with good 1st half & Average 2nd half.. There is a funny & intriguing con jobs showcased in the film throughout where both Bunty Babli’s duo’s takes on each other. Director Varun Sharma manages to retains the Quirkiness of BB1."

Rani Mukerji recently appeared on Kapil Sharma’s comedy show on Sony TV to promote Bunty Aur Babli 2, she gave her audience a sneak peek into her early days of Bollywood. She said she was nervous about doing romantic scenes with Aamir Khan and Shah Rukh Khan early on in her career, adding that she had 'young crush' on both of them. READ MORE

When and where to watch Kartik Aaryan-starrer

Abhishek Bachchan won hearts in Bunty Aur Babli. His acting chops and incredible chemistry with Rani Mukerji made his OG Bunty a fan favourite. READ THIS Rani Mukerji fans excited to see her on the big screen

A fan @Chamkeelii shared via Twitter, "THE DAY IS HERE! #BuntyAurBabli2 releases today in theatres. Sooooo excited to watch it, been waiting for a sequel since 2005 & waiting for its release for almost 2 years. So thrilled to have #RaniMukerji back as Babli. Whether it works or not, Ranians are in for a treat."

Pankaj Tripathi is playing a cop in the film. He earlier told PTI, "In the film, the new Bunty Aur Babli are tech-savvy. The old con couple had an old world set-up. In this new digital age, in a bid to earn quick money some people, unfortunately, get trapped. It is the right time to come up with a film like this."

Saif Ali Khan is stepping in Abhishek Bachchan's shoes for the film. In an earlier statement, Saif had said, "Bunty Aur Babli 2 is a completely rebooted sequel and is set in today’s time. It is a fantastic script that hooked me on instantly. It is an out and out entertainer for the entire family to sit and enjoy, and this is what I loved and connected with. Also, it is a new role, language and milieu and that’s what I really look for in a script. I also love the dynamics between the originals and the new Bunty and Babli in the film. It is fresh, hilarious and extremely engaging. Rani and I have always had a lot of fun working with each other, and I am looking forward to our creative collaboration again. It is also equally amazing to be back home at YRF again."

The cast of the film recently appeared on shows like The Kapil Sharma Show, Kaun Banega Crorepati 13 and The Big Picture.