The Shoojit Sircar-directed film Gulabo Sitabo, starring Amitabh Bachchan and Ayushmann Khurrana in the lead roles, will have its premiere on June 12.

Even as India prepares to enter phase four of lockdown, the Hindi film industry is far from certain when it will get rolling. While theater owners are increasingly concerned about surviving in the coming months, Bollywood producers have already begun negotiating with OTT giants to save themselves from losses.

Shoojit Sircar has become the first filmmaker to lock a deal with an OTT platform, for his upcoming release Gulabo Sitabo, which is set to change things in the industry. The film was earlier scheduled to release in theaters in April.

Last week, the Multiplex Association of India (MAI) appealed to studio partners, producers, artistes and content creators to support the cinema exhibition sector by holding their films and releasing them in theaters once they are open again.

“MAI would like to urge all studio partners, producers, artistes and content creators to support the cinema exhibition sector, a vital part of the value chain, by holding and releasing their films in the theatres, once they open again.

“To this end, we urge all studios, producers, artistes and other content creators, to kindly respect the exclusive theatrical window, which has been a time-tested industry practice, agreed to by all stake-holders, not just in India, but even globally, for several decades,” read the statement by MAI.

Streaming giants, which are currently the only source of fresh content, are benefiting from mainstream producers’ newfound interest in them as this will not only make them the one-stop destination for movies, but will also make them more powerful, at least in the near future, until cinemas become the happy, safe place for the audience once again.

The first poster of actor Nawazuddin Siddiqui-starrer Ghoomketu, which is set to release on ZEE 5 next week, has been released. It features Nawazuddin Siddiqui arriving at the Bollywood station with his bag full of write-ups and his metal box (pitara in Hindi).

Also featuring Anurag Kashyap, Ghoomketu will begin streaming on ZEE5 from May 22.

Today, actor turned author Twinkle Khanna shared on Instagram how her daughter Nitara gave her a makeover at home, giving them some mother-daughter time together.

The little one has given me a fine makeover. Brows on fleek and all that jazz. @namratasoni watch out-you have some serious competition! #grouchomarxeyebrows

Sharing her selfie with Nitara, Twinkle wrorte, “The little one has given me a fine makeover. Brows on fleek and all that jazz. @namratasoni watch out-you have some serious competition! #grouchomarxeyebrows."

Ashwiny Iyer begins work on Narayana and Sudha Murthy biopic
Ashwiny Iyer Tiwari, who last helmed Kangana Ranaut starrer Panga, is working on her upcoming film, a biopic based on Infosys co-founder NR Narayana Murthy and wife Sudha Murthy. About penning the biopic, Ashwiny said in a statement, “They were the last people I met before the lockdown, spending five days in Bangalore with them. That alone has made me a better person. Sudha Murthy's picture is my phone's wallpaper. She's so secure in who she is and yet eager to learn. She's like a child and lives her life like one.” 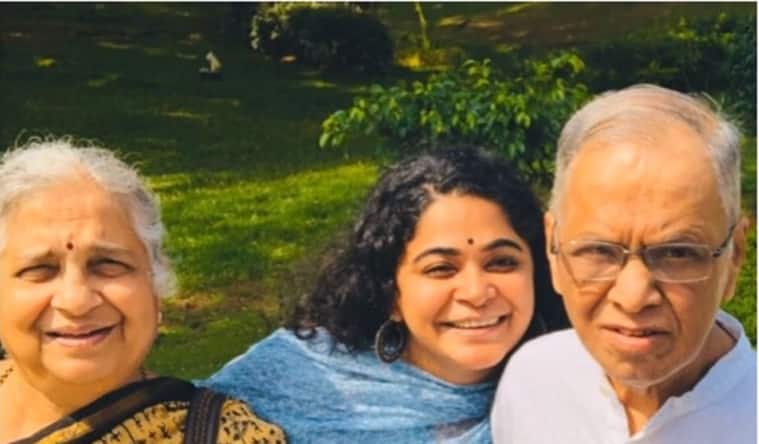 The film will be rolling by the end of 2020. The casting of the film is still pending.
Amaal Mallik records with Macedonian Symphonic Orchestra for Saina Nehwal biopic

Sharing his experience, Amaal Mallik says, "Saina Nehwal's soundtrack is one of the most prestigious and powerful scores I worked on. We haven't done something so beautiful like this before, something so varied like multi-genre. It has got the soul, the Indian melody, and lyrics at heart, but the Macedonia orchestra has added another world of dynamics and beauty to the arrangement. it a fusion of extreme genres, a mix of something new and fresh Each musician has added such a beautiful vibe, we recorded around 30 strings,10 brass, and many more on skype."

Actor Sonam Kapoor took to Instagram to post an “appreciation post” for her husband Anand Ahuja. The two celebrated their second wedding anniversary on May 8. Today, Sonam shared a picture of Anand lovingly holding a puppy. Both of them are ardent animal lovers.

Appreciation post for the best husband in the world who handles my emotions like a pro and loves me unconditionally. I love you @anandahuja and I’m so grateful for you. Cc @jalan_varun

In the post, Sonam Kapoor called Anand Ahuja the best husband. She wrote, “Appreciation post for the best husband in the world who handles my emotions like a pro and loves me unconditionally. I love you @anandahuja and I’m so grateful for you.”

Actor-model Freddy Daruwalla's father has tested positive for coronavirus. His father is 67 years old. Freddy confirmed his father tested positive to indianexpress.com. He said, “My father had few flu symptoms, mild fever and body ache. He also could not taste the food. So, we informed our doctor, and after observing him for a few days, the doctor suggested that we get him tested for COVID-19. The test report came positive on Tuesday last week. But, because my father is asymptomatic, the doctor and the BMC suggested that we home quarantine him at our Jogeshwari bungalow."

Aamir Khan's long-time assistant Amos Paul passed away on Tuesday following a massive heart attack. He was 60. Amos worked with Aamir for the last 25 years and was very close to the actor. His death has come as a shock for Aamir and wife Kiran Rao. The two were also spotted at Amos’ prayer meet on Wednesday. Aamir Khan's daughter Ira Khan is also mourning the demise of Amos. She took to Instagram and wrote a heartfelt post remembering him. Ira wrote on her Instagram story, “Thanks for teaching me how to make home-made coffee look cool, playing saat aath with us and showing me what efficient packing really looks like. Didn't think you'd ever not be around.”

Nirmat Kaur and Irrfan Khan starrer The Lunchbox (2013) was lauded by critics and the audience all over the world. The film is a beautiful story about an unusual friendship between two strangers. Kaur recently posted a picture of Irrfan's mural that is made in Bandra West, Mumbai by Bollywood Art Project's Ranjith Dahiya.

Chanced upon this arresting wall artwork in Ranwar Village on an errand run today. Incidentally a few houses down the one where Saajan Fernandes’s house is located in The Lunchbox. Such an ominous yet celebratory confluence of life and art. Who’d have thought... #IrrfanForever pic.twitter.com/ahi79KtNH3

Nimrat Kaur tweeted, “Chanced upon this arresting wall artwork in Ranwar Village on an errand run today. Incidentally a few houses down the one where Saajan Fernandes’s house is located in The Lunchbox. Such an ominous yet celebratory confluence of life and art. Who’d have thought... #IrrfanForever." The film's director Ritesh Batra reacted to Kaur's tweet, and wrote, “the heart breaks”.

Filmmaker Shoojit Sircar's upcoming film Gulabo Sitabo, starring Amitabh Bachchan and Ayushmann Khurrana, will have its worldwide premiere on Amazon Prime Video on June 12. Bachchan shared the news on Instagram along with the film's new poster.

Gulabo Sitabo becomes the first big Bollywood film to have its direct release on the web since the industry shut shop due to the nationwide lockdown amid the coronavirus pandemic.