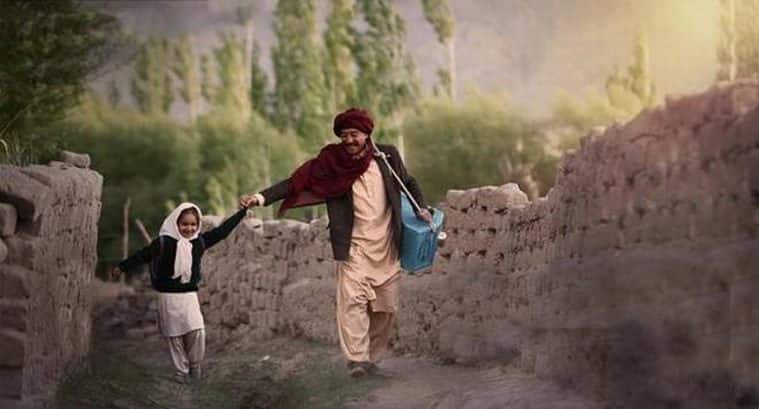 Bioscopewala, starring Danny Denzongpa, is based on Kabuliwala by Rabindranath Tagore.

The trailer of Bioscopewala starring Danny Denzongpa and Geetanjali Thapa is everything that makes us hopeful for a good, engaging film. The trailer develops an emotional connection with the audience only in a matter of few minutes. It leaves you rooting for the female protagonist to find out about the man who shaped her childhood, to find out about that Bioscopewala.

He taught her the art of storytelling and she spent her impressionable years playing with him but now she’s a grown up and things aren’t the same anymore.

Directed by Deb Medhekar, Bioscopewala is adapted from Rabindranath Tagore’s short story Kabuliwala. The YouTube description of the trailer suggests that the story of Bioscopewala extends from the point where Kabuliwala ends.

So what is Kabuliwala all about?

Kabuliwala is the story of love and separation. It is the story of a Pathan from Afghanistan who makes a living by selling dry fruits on the streets of Calcutta. Mini, a little girl, who lives with her family in Calcutta is fascinated but intimated by the look of this man. His daily route covers Mini’s house as well and gradually, he befriends the girl. The two play every day, he treats her with dry fruits and tells her fascinating stories and she finds a friend in him. Mini’s mother is quite wary of the Pathan but her father believes him to be a decent man. Days pass by and the friendship between the Kabuliwala and Mini only grows stronger. The love he has for her is unconditional. Her presence reminds him of his own daughter Sana and he comes back every day just so he can spend a few minutes with Mini. Danny Denzongpa plays the Bioscopewala, who is based on the iconic character of Kabuliwala.

But their bliss is short lived. Kabuliwala is arrested by the police on the charges of a murder. The police take him through the streets and just like every day, Mini is waiting for her Kabuliwala to arrive. This time, he arrives but with his hand in cuffs. Kabuliwala is gone now.

Years later, on the day of Mini’s wedding, he returns. He requests Mini’s father to let him see her just once. Dressed in her wedding attire, Mini walks in and tears roll down Kabuliwala’s eyes. Looking at her, he is reminded of his own daughter. Mini’s father asks him to return to his village to be with his family. He is separated from his ‘Kuki’ once again but this time, the separation is hopeful.

Bioscopewala, based on this story by Tagore, releases on May 25