Akshay Kumar in a still from BellBottom. (Photo: Pooja Entertainment)

Akshay Kumar-starrer BellBottom is out in theatres now. The film, which also stars Vaani Kapoor, Lara Dutta and Huma Qureshi in pivotal roles, is one of the first big-scale Hindi movies to release in theatres nationwide after the second lockdown was lifted. While it is still very doubtful how many people will actually turn up to see the movie amid the pandemic, Khiladi Kumar stands by the makers’ decision to have a theatrical release. The film’s story shows a covert operative, played by Akshay, who saves 210 passengers of a hijacked Indian plane.

Earlier, while speaking to the media in a group interview, Akshay had talked about the box office prospects of BellBottom, “The pressure is that Maharashtra is still closed and 30 per cent of the money comes from Maharashtra. And because only 50 per cent occupancy is allowed so half of the rest of the 70 per cent share is also gone. But we have to take a risk. I am keeping my fingers crossed.”

More on BellBottom |‘Akshay Kumar kept staring at me’: Lara Dutta on her transformation into Indira Gandhi for BellBottom

One of the most intriguing aspects of the BellBottom trailer was Lara Dutta’s makeover as former Prime Minister Indira Gandhi. While fans were taken by the beauty queen’s new avatar, Dutta told indianexpress.com that she herself couldn’t believe the transformation upon looking herself in the mirror.  “I couldn’t recognise myself. First of all, being offered to play the role of a personality like Indira Gandhi is a dream come true for any female actor. You wait for years to play such an iconic role on screen. But it is also needless to say that it is a tremendous amount of responsibility as you need to portray a legendary figure correctly on screen,” she said.

Calling it her dream role, Lara said she knew at once upon reading the script the amount of preparation that was needed to portray such an iconic historical figure. She said, “When it came to performance, I knew I had to pull up my socks to make myself believable on screen. There was a lot of prep that went into that as well. I watched a lot of footage and archive videos of Indira Gandhi. I was also lucky to get notes from my father. While he was in the Indian Air Force, he used to serve Mrs Gandhi as her personal pilot. So, he became an integral source of information for me. Through him, I got an insider perspective rather than just what was available to me through the makers and what existed on the internet.”

'Second half is extraordinary'

#BellBottom is par excellence. First half is good but the second half is EXTRAORDINARY With the SandStorm Climax (Best VFX & visuals) Age Is Just A Number For @akshaykumar. Watching It In 3D makes it a perfect big screen watch with repeat value," shared Twitter user @iitsprajwal

'Thank you for bringing back the glory to cinemas'

'Can't get over this background music'

Twitter user @akki_dhoni shared, "I still cant get over this background music... @akshaykumar sir you need this type of epic BGM in your every movie which can give justice to your DASHING personality."

'Worth watching for the cast and screenplay'

"Amazing climax!! #BellbottomInCinemas #BellBottom kinda similar to #airlift , but gives justice to the premise !!! Worth watching for the cast and screenplay #AkshayKumar is his very best #BellBottomReview," writes Twitter user @kumarsamarth33.

The Indian Express' Shubhra Gupta writes in her review of BellBottom, "Akshay Kumar film is a let-our-hair-down-caper which embraces its upbeat, silly spirit, and turns it into a worthy outing for the big screen in these Covid times." READ MORE

'So much love pouring for Bellbottom'

Sakhiyan 2.0 has become a viral sensation ever since its release.

'Welcome back to the cinemas', tweets Arjun Rampal

Arjun Rampal shared via Twitter, "So this is gonna be my first film in the THEATERS post lockdown. So so happy for the whole team of #BellBottom for the industry and my friends @akshaykumar @jackkybhagnani @vashubhagnani @nikkhiladvani @madhubhojwani congratulations welcome back to the cinemas. #BellBottomDay."

Meet my on-screen better half ✨
Worked with this gem of a person for the first time.
Watch @Vaaniofficial shine as Radhika Malhotra, on the big screen in#BellBottom. Now in cinemas, also in 3D.

"Meet my on-screen better half ✨Worked with this gem of a person for the first time. Watch @vaanikapoor shine as Radhika Malhotra, on the big screen in #BellBottom. Now in cinemas, also in 3D, " shared Akshay Kumar.

Director Sujoy Ghosh got to see the film and shared his review on Twitter. "i saw bellbottom. gotey gripping stuff. whatta superbly executed film by @ranjit_tiwari... my respect to aseem, pervez, rajiv, chandan, tanishq et all -- superstars you are! and of course @akshaykumar -- faad diya aap ne. and my last two words on bellbottom -- amit subrata!" 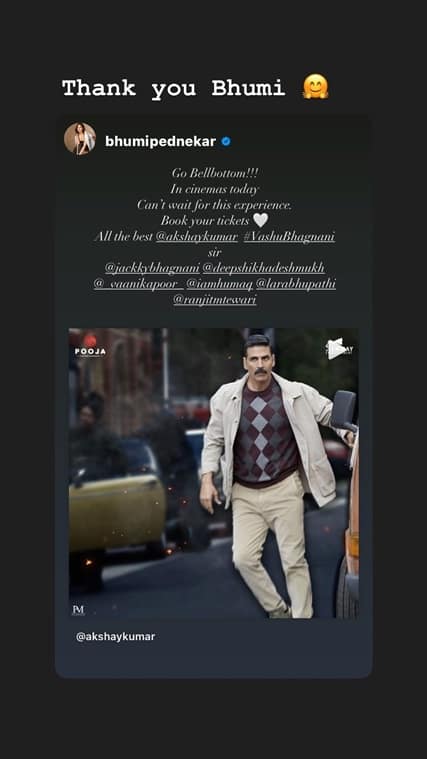 Director Sujoy Ghosh got to see the film and shared his review on Twitter. "i saw bellbottom. gotey gripping stuff. whatta superbly executed film by @ranjit_tiwari... my respect to aseem, pervez, rajiv, chandan, tanishq et all -- superstars you are! and of course @akshaykumar -- faad diya aap ne. and my last two words on bellbottom -- amit subrata!"

Akshaye Rathi tweeted, "Important day for all of us in the Hindi film fraternity. The release of #BellBottom will mark a paradigm shift in consumption patterns at theatres. Hope the film’s business can encourage more producers to plan releases in the weeks ahead & expedite the sector’s revival." 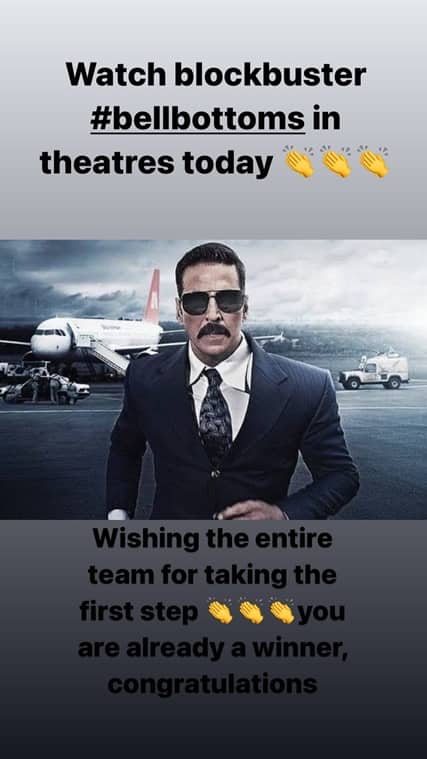 Kangana Ranaut posted on her Instagram story, "Watch blockbuster #bellbottoms in theatres today." She added, "Wishing the entire team for taking the first step.. you are already a winner, congratulations."

Karan Johar shared on Twitter, "Kudos to @akshaykumar and his team of #bellbottom for being trailblazers! Excited to watch the film soon! All my love to @EmmayEntertain @poojafilms @jackkybhagnani and the solid cast and crew of the film!" Akshay Kumar replied to Ajay Devgn's best wishes and wrote, "Thank you so much Brother, means a lot. I pray Maharashtra opens up soon and you'd also be able to watch it. Would love to know your thoughts."

Are you excited to see BellBottom's cast on The Kapil Sharma Show? 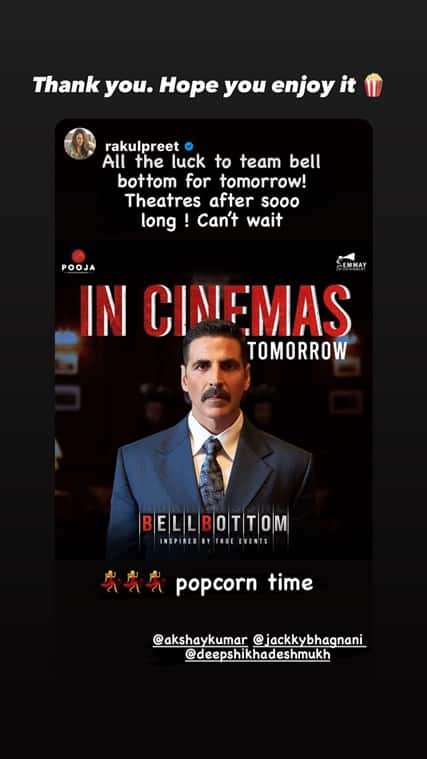 Akshay Kumar's next film's co-star Rakul Preet Singh shared on her Instagram story, "All the luck to team BellBotton for tomorrow! Theaters after sooo long! Can't wait." In reply, Akshay posted, "Thank you. Hope you enjoy it."

Vaani Kapoor, who plays Akshay Kumar's love interest in Bellbottom, recently opened up about her experience of working on the film as well. "The makers have kept it a certain way. See, the film is being led by Akshay Kumar’s character. The story is about a plane that gets hijacked. It’s based on these two events that happened in the late 70s and early 80s during Indira Gandhi’s time as the Prime Minister of India. Keeping it very crisp, my part is of this girl who is married to Akshay’s character. She is sweet, refreshing, very lovely. She is also the backbone of his life. As a personality, she is someone who is very level-headed and centered," said Vaani.

Vaani also told indianexpress.com that it's not very often that actors like her get a chance to perform a well-written part for a female character. "Yes, there is an emergence of women-driven parts but it’s not that easy. The best ones do go to the bigger, credible actors who’ve already achieved a certain amount of stardom. Having said that, one’s aim is to reach that (stardom/popularity), which is helped by working with actors like Akshay Kumar who has a massive audience," the actor concluded.

Based on the airplane hijackings that took place in the late 70s and 80s, the Ranjit Tiwari directorial will be available to watch in states where theatres have been allowed to function with 50 per cent seating capacity.