As Anupam Kher shares body transformation on 67th birthday, here’s looking at his career where change was the key

During the course of the 80's and 90's, Anupam Kher set himself apart with his unusual brand of villainy. 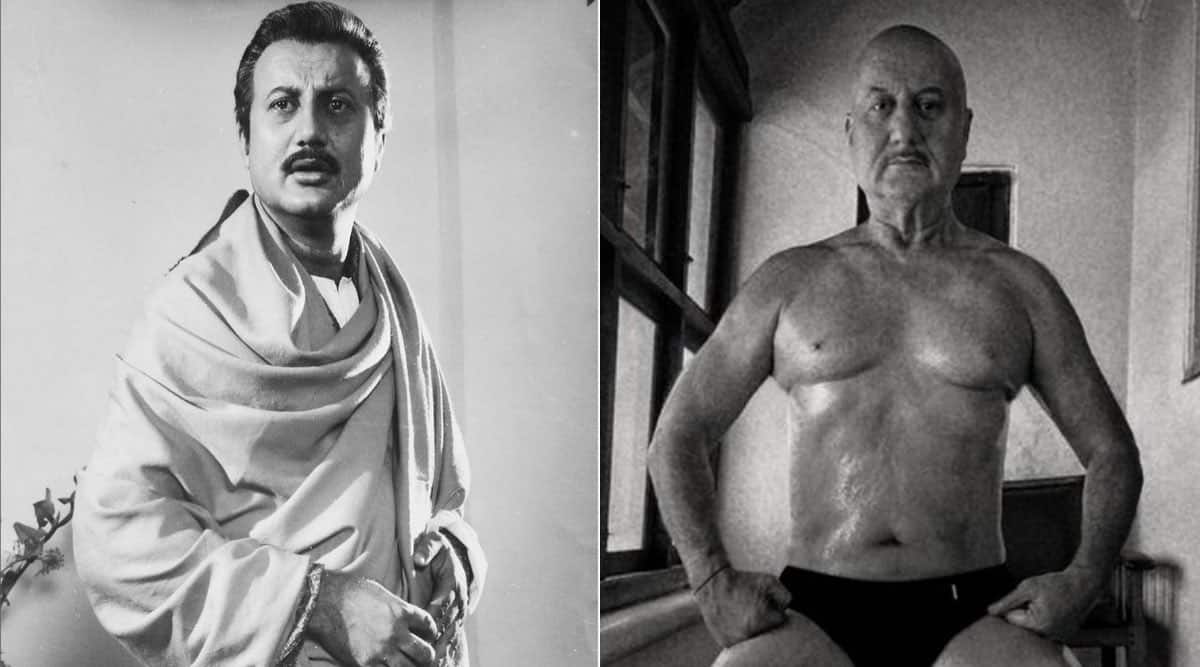 As actor Anupam Kher turns 67, he shared his body transformation and spoke about how he has always believed in reinventing himself. The actor shared a photo where he is dressed in briefs and looks quite fit. “Happy birthday to me! I have always believed in reinventing myself. Today as I start my 67th year, I am motivated to share these pics with you. I know I have miles to go. पर try तो करना चाहिए ना।शायद कुछ लोग प्रेरित हो! Wish me luck! This is 2022. #YearOfTheBody. Jai Ho!,” the actor wrote.

Happy birthday to me! 😊
I have always believed in reinventing myself.
Today as I start my 67th year, I am motivated to share these pics with you. I know I have miles to go. पर try तो करना चाहिए ना।शायद कुछ लोग प्रेरित हो! Wish me luck! This is 2022. #YearOfTheBody. Jai Ho!💪 pic.twitter.com/Z0xj74Km10

Reinvention is a mantra he has followed in his life too. In his film career spanning little less than five decades, Anupam Kher has always managed to play fresh variations of each character.  For instance, despite playing numerous father roles in several iconic films of the 90’s, he didn’t get slotted into the Babuji category — he could be the quirky and free-willed Pops from Dilwale Dulhaniya Le Jaaenge, or the giggly father in Kuch Kuch Hota Hai, trying to woo the Miss Briganza of the college, or the proud father in Maine Pyar Kiya Hai. He perfected the Barjatya image of the father figure as well, from Maine Pyar Kiya to Hum Aapke Hain Koun.

He also played the father figure who transforms into the diabolical villain—if he already isn’t so at the beginning.  What’s interesting to note is that Anupam Kher’s Bollywood villainy defined the 80’s and 90’s — he wasn’t always the gun-toting Gulshan Grover type, spewing dialogues through gritted teeth—sometimes he could be the seedy money-minded uncle as he was in Beta, or the corrupt father in Kaho Na Pyaar Hai, or the vengeful dad in Dil. He was able infuse comedy in his scheming avatars, and could easily switch the genres. He could be the criminal sidekick existing for the laughs, but he could also be the cold, and calculating mastermind. It was in 1986 film Karma as Dr Dang when Anupam Kher proved that he could do the by-the-numbers Bollywood villain with elan. ‘Iss thappar ki goonj abhi tak mere kaanon mein hai’ remains one of the most iconic dialogues of the 80’s. He played the evil dad trope in Tezaab, when he portrayed the merciless father to his daughter Mohini (Madhuri Dixit), and forced her to dance. In Dil, he is shown to be loving father, who is also a corrupt businessman. He is less than pleased when his son Raja (Aamir Khan) decides to marry the daughter (Madhuri Dixit) of the man who humiliated him. He seizes the opportunity to separate the two when Raja has a terrible accident, and refuses to pay for his surgery until she sacrifices her love for him. In this role, Anupam Kher, who was toying with the greys of his character, transitioned straight into becoming the film’s primary antagonist, who is determined to destroy Madhu and her family. The jovial air evaporates completely, and only at the end of the film he redeems himself after realising that he has almost his son.

In Aur Pyaar Ho Gaya Hai—he embodied a similar role as a questionable businessman, who gets caught by his daughter Ashi’s (Aishwarya Rai Bachchan) future in-laws, and once again sets about separating her from her lover, played by Bobby Deol. Once again, he emerged as the villain of the story, who is redeemed by the last few minutes of the film. There was no subtlety or nuance in the portrayals—but it fit perfectly with the colourful theme of the 90’s, where flamboyant exaggeration was the language of Bollywood. It was what the audience lapped up at the time, and Anupam Kher’s numerous hairstyles—mostly alternating bald patches–paired with his glasses, set him apart from the slew of villains in that era.

Anupam Kher was the master of playing the loving-dad-but-villain in the 90’s. He probably was one of the few characters who stood out in Prem Aggan (notably Fardeen Khan’s debut), where he was once again keeping his daughter away from the middle-class man. He seemed to revel in this role, and yet, he managed to never become staid. Every angst-ridden, vengeful father, was different from the previous. In Kaho Na Pyaar Hai, he was the rich businessman, whose daughter Sonia (Ameesha Patel) had fallen in love with a man Rohit (Hrithik Roshan) of modest means. Unfortunately, Rohit had caught his minions indulging in some less-than-honourable business and killing a man, and so he was murdered too. Anupam Kher’s portrayal of the primary antagonist was far more toned down and subtle—unlike his earlier anti-heroes. There were no frothy dialogues or hysterical giggles to mark him as a villain—-he just communicated his instructions through phone calls. This time, there was no redemption waiting for him as well, and he was sent to prison for his crimes. At the end of the film, he knows that he cannot apologise for his sins, and is taken away by the police, as he looks for words. Anupam Kher defined the 80’s and 90’s with his plethora of roles—as there were years where he starred in more than four films. He is the unusual dad-villain from the 90’s, and he could make the effortless transition from the loud 90’s to the more toned down 2000’s.

Russia-Ukraine War: What to know on Russia’s war in Ukraine