Actors Taapsee Pannu, Pavail Gulati, Manoj Pahwa and Kumud Mishra talk about working with Anubhav Sinha and what makes him different from other directors. Anubhav Sinha made a switch to content-driven cinema with Mulk, which released in 2018. (Photos: Instagram and Express Archives)

The audience now calls him ‘Anubhav Sinha 2.0’ as they continue to wonder where he was hiding all these years before Mulk happened in 2018. Even his actors are intrigued. “That’s a question I love asking him,” Taapsee Pannu, who starred in the filmmaker’s Mulk, told indianexpress.com.

A social drama, Mulk revolved around a Muslim family fighting to regain its lost respect in society after their son is declared a terrorist. The film, in a way, divided Anubhav’s filmography into two halves – one where he helmed commercial potboilers like Ra.One (2011) and Cash (2007), and the other that now boasts of three critically acclaimed movies (Mulk, Article 15 and Thappad).

Despite working with stars like Shah Rukh Khan in Ra.One, and Ajay Devgn and Suniel Shetty in Cash, Anubhav Sinha wasn’t satisfied. “I actually don’t know about the person who made whatever films he made before Mulk. I’ve only seen this version,” Taapsee said.

Thappad actor Pavail Gulati added that even the filmmaker doesn’t have a reply to what changed in him. “I’m sure there’s a big conspiracy. He slept and woke up the next morning as a different person,” Pavail shared. Anubhav Sinha definitely left many shocked with the stories he started shifting towards, all of them being socio-political dramas with hard-hitting plots, something that Pavail calls “his kind of cinema.”

The actor was just a few projects old when Anubhav roped him in to play Taapsee’s on-screen husband Vikram in Thappad. “I was blown away after watching Mulk and Article 15. So I knew if I get a chance to work with him, I’ll definitely get to showcase my talent and be in safe hands,” Pavail recalls.

Taapsee Pannu said that she gets drawn to his scripts as she trusts them to be “deeper than what it looks like.” The actor added, “Whenever I have discussed any film with him, it’s always been something that’s going to leave an impact more than just the two hours it’s going to be on screen.”

Anubhav Sinha directed several television shows and music videos in the 90s. He took to direction with musical hit Tum Bin in 2001. He soon followed it up with Aapko Pehle Bhi Kahin Dekha Hai, Dus, Tathastu, Tum Bin 2, apart from producing some of them too.

But just as the audience wished to see more from him, even he seemed a little dissatisfied. A frequent collaborator and actor Kumud Mishra shared, “Even if I had seen his previous films, I never paid attention to the director. All I knew of him was he is a big commercial filmmaker. I believe whatever work you do has a ripple effect on your progress in life. So those commercial films are instrumental in bringing him to this point of his career.” Kumud has done four projects with Anubhav, including three films for which the filmmaker won several awards. Recalling how adamant Anubhav was to cast him in the small role of a judge in Mulk, Kumud shared, “He was sure that only I could play the judge in Mulk, and I wondered why since there are better actors than me in this industry.”

The actor eventually went on to find a new fan base and also show his craft in the three films. “I feel good to be a part of all his projects.”

Anubhav Sinha put his faith in another seasoned actor who was already stereotyped – Manoj Pahwa. The actor agrees that before he signed Mulk, he was stereotyped as a comedian. So, apart from giving relevant stories a chance, the filmmaker also took the risk of casting actors against type.

“He is the only director who believes I can do any kind of role. He helped me showcase my versatility with Mulk. He told me he’ll see if anything goes wrong,” Manoj shared, adding that despite the team of the movie being hesitant about casting him in the role of Bilal, Anubhav was sure about his decision. Today, the filmmaker writes roles keeping Manoj in mind

Manoj Pahwa and Anubhav Sinha first collaborated on TV show Shikast (1993) and went on to work in several other movies and music videos, where Manoj shares the director even made him dance. “He’s not just my brother or friend, but also my mentor. Our personal relationship is such that he even scolds me if he thinks I’m drinking too much. He tells me, ‘Abhi bahut filmein karni hain aapko mere sath,'” Manoj quipped. For Taapsee Pannu, working with Anubhav was a chance to learn from his experience. “As and when we started talking, I got to know him more as a person. His opinions, understanding on various angles of the same issue was very impressive.”

The actor revealed that she became a fan of Anubhav Sinha’s writing skills right after she read Mulk’s script that shows his courage to hit the nail on the head. “The fact that he can convey so much in nuances and without underlining things… Mulk will be the first thing that’ll come to my mind if you ever mention Anubhav Sinha to me,” she said.

Pavail Gulati agrees too. He says the filmmaker gives his actors liberty to perform without many instructions. “His scripts are so beautifully written, you get spoiled. You keep comparing other projects with that. He’ll just explain things somewhere and you start doing it in that way. You won’t realise it is actually him who sowed that seed in you.”

The actor was just two days into the shooting of Thappad when Anubhav Sinha threw a birthday party for him and helped him get comfortable with the team. “How beautifully he breaks the ice! I had my guards up on my first day on Thappad set, but he made me comfortable instantly. He is so funny and open about things,” Pavail added.

Though none of the artistes could decode why things changed for Anubhav Sinha, both Manoj Pahwa and Kumud Mishra agreed that he probably took time to understand the direction he wanted to take. “Maybe he wanted to give multi-starrers, big budget films a try in the beginning. But later realised that’s not his real calling. He is man with socio-political awareness. So he wanted to say something to society and thought of bringing that through his films,” Pahwa said. 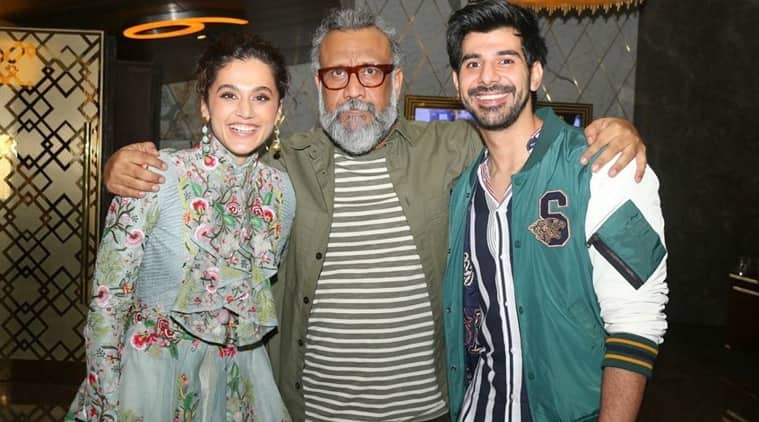 According to Pavail Gulati, Anubhav Sinha made films to please people during the first phase of his career. But then he realised he wasn’t able to please himself, and that’s when he started making movies for himself. “I think all his anger and frustration came out in his films, transforming him into this wonderful director,” the actor shared.

His actors also swear by the life advices they have received from Anubhav Sinha. Pavail learned from Anubhav to pick scripts which he believes in and not for the producer or the actors involved. Taapsee added that she reaches out to the director whenever she needs an “unbiased wholesome view on a topic,” as she feels “he’s someone who has the capacity to look at a problem from a broader perspective, and not jump to conclusions.”

“His favourite thing to say is ‘Zindabad’. His advice or whatever you want to call it, is to live free, happy and be good,” Taapsee said. “This man is something else. He might look serious, but he is a cuddle-bunny,” Pavail concluded.

Happy birthday, Anubhav Sinha. And thank you for your films!