Aamir Khan tweeted, "Was very kind of him to spare his valuable time.” 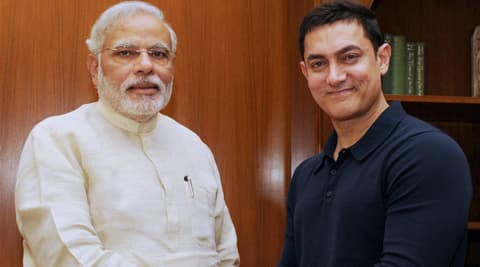 Aamir Khan tweeted, “Was very kind of him to spare his valuable time.”

Bollywood star Aamir Khan, who has been championining the cause of social issues, today met Prime Minister Narendra Modi here to discuss the problems which he highlights in his TV programme ‘Satyamev Jayate’.

The 49-year-old actor and director later said the Prime Minister assured him that he would look into the issues raised by him.

“Just came out of my meeting with Honorable Prime Minister of India Shree Narendra Modiji. Was very kind of him to spare his valuable time. Shared with him the overwhelming support that we got from people across the country through ‘Vote for Change’ campaign on SMJ (Satyamev Jayate) on the various issues that we tackled
in our show. He has assured me that he will look into all the matters,” Aamir said in a series of tweets later.

The Prime Minister’s office tweeted a picture of the two meeting amicably in Modi’s office in the South Block.

The ‘Vote for Change’ episode, which was aired in the run up to the last Lok Sabha elections, focused on criminalisation of politics in India while urging the voters to cast their votes to make a difference.

The Prime Minister’s Office described the meeting in Modi’s office in South Block as a “courtesy call”.