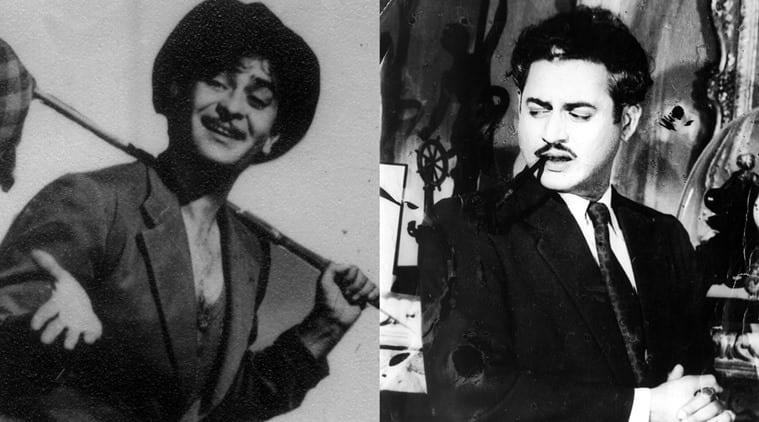 It’s not for nothing that the Fabulous Fifties is referred to as Bollywood’s Golden Age.

Even the hardest-to-please critics and cineastes who don’t give a tinker’s damn about popular Hindi cinema agree that the 1950s was a high point for Bollywood. It’s not for nothing that the Fabulous Fifties is referred to as Bollywood’s Golden Age. These are films that most Indians, cutting across generation and region, have practically been raised on. A glance at some of the decade’s most landmark films reveals strong social and political themes. As a recently freed nation, there was a wave of optimism among the masses and the cinema of the time took pains to reflect and address that reality. Under Pandit Nehru, India was a socialist society and the films made during the 1950s led by visionary directors like Bimal Roy, Mehboob Khan, V. Shantaram and BR Chopra sincerely took up the task of nation-building. The conflict between modernity and traditions and the rich-poor divide became a dominant theme, as reflected in BR Chopra’s Naya Daur and in numerous Raj Kapoor hits where the gleaming, shining cities are depicted as corrupt and soulless dens. “This is Bombay, my friend,” a roadside beggar gives the hick Raj Kapoor his first city lesson in Shree 420. “Here,” he says, trenchantly, “buildings are made of cement and human hearts of stone.”

Independent India’s biggest stars, the evergreen triumvirate of Dilip Kumar, Dev Anand and Raj Kapoor, represented the ideal heroes of the 1950s whereas Madhubala, Nutan, Nargis, Meena Kumari, Suraiya and Waheeda Rehman became synonymous with the Golden Era thanks to their equally vast talent and glamorous aura. They commanded a following no less than their male counterparts.

In the first of our essay series called ‘Hindi classics that defined the decade’, we explore the 1950s. Here are 10 classics from that decade that confirm the Fifties as a treasure trove for film lovers. These films demonstrated to the audiences, and especially critics, that popular cinema should be taken seriously. 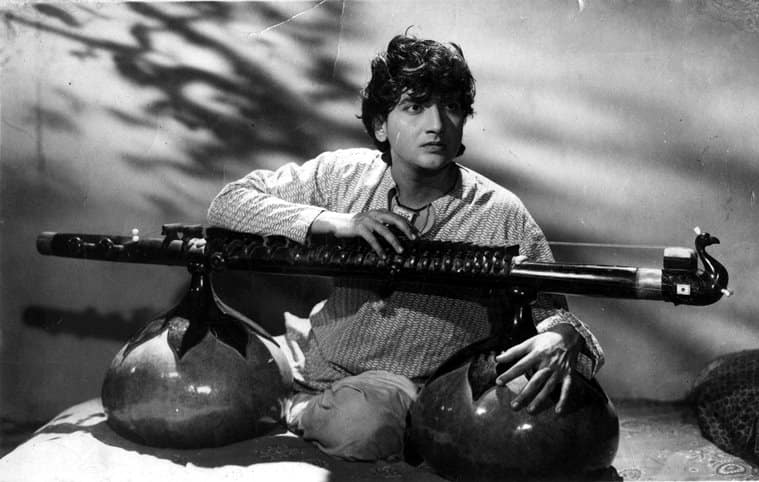 Vijay Bhatt’s timeless classic is a celebration of music, what you might call Bollywood soundtrack at its finest. Its message that ‘Music is for everyone, it has no boundaries’ makes Baiju Bawra a film so overwhelmingly melodic that when Baiju seeks revenge for his father’s death, it’s truly a sweet revenge. Baiju (Bharat Bhushan) may be a fictional footnote in history but in the film, he defeats none other than the great Tansen and goes on to reunite with his childhood sweetheart, Gauri (Meena Kumari). With Naushad at the musical helm, Shakeel Badayuni on lyrics, Mohammed Rafi on playback, and Ustad Amir Khan and Pandit DV Paluskar as consultants, can you think of another Hindi film with such titanic names on the music credit? Balraj Sahni in a still from Do Bigha Zamin.

Bimal Roy’s ode to Vittorio De Sica’s Bicycle Thieves, Do Bigha Zamin is a powerful tale of the farmer Shambu (Balraj Sahni) who, debt-ridden and suffering injustices at the hands of the gentry, leaves for the city to take up a temporary job in order to repay dues accrued on his land. According to popular legend, director Bimal Roy was not sure about casting Sahni, a BBC-London-returned sophisticate. But today, the film is best remembered for his moving and utterly believable performance. Raj Kapoor in a still from Shree 420. (Express archive photo)

The Shree 420 of the title is the corrupt capitalists while Raj (Raj Kapoor) is an innocent bumpkin torn between true love, meaning and knowledge (Nargis’ Vidya) and material illusion (Nadira’s Maya). The Tramp is seduced by the glittering glamour of the big city but finds his virtuous way in the end. As the song Ramaiya Vastavaiya predicted, Lord Ram did come. Suchitra Sen and Dilip Kumar in a still from Devdas. (Express archive photo)

Why should the tragic story of a doomed alcoholic resonate with viewers and inspire filmmakers even after so many decades? Because Bimal Roy gives viewers a psychological peek into Dilip Kumar’s self-destructive streak and because Dilip Kumar is universally greeted as the best Devdas. 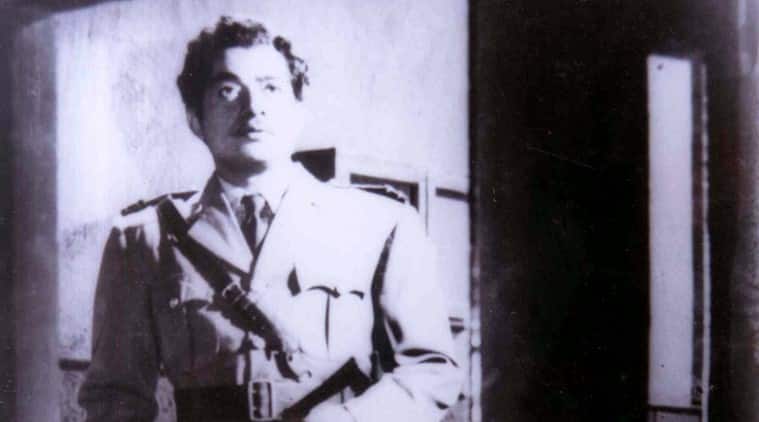 V Shantaram in a still from Do Aankhen Barah Haath. (Express archive photo)

In a seminal year for Hindi cinema that also saw Mother India and Pyaasa, Do Aankhen Barah Haath stands out for V. Shantaram’s continuing effort to bring social change through cinema. His protagonist, the jail warden Adinath (played by the director himself) is an idealist who wants to reform his prisoners and prepare them for the real world. But the transformation of hardened criminals into good and honest citizens is a long march. But then, no road was long enough for the social crusader Shantaram. There’s a reason why Radha (Nargis) is anointed to the elevated status of Mother India. She’s the mother of all celluloid characters. An ideal bride, wife and mother, in the changing faces of Radha, Nargis created the image of a perfect Indian woman. As writer Nasreen Munni Kabir argues, ‘Mother India’s underlying message is that the land gives dignity to the poor and a woman’s dignity lies in her honour.’ Guru Dutt in a still from Pyaasa. (Express archive photo)

A classic Guru Dutt story of defeat and disillusionment with the world at large, Pyaasa’s real star is Sahir Ludhianvi who gives the film its poetic melancholy and anguish. The life of a loser poet has never been this seductive. 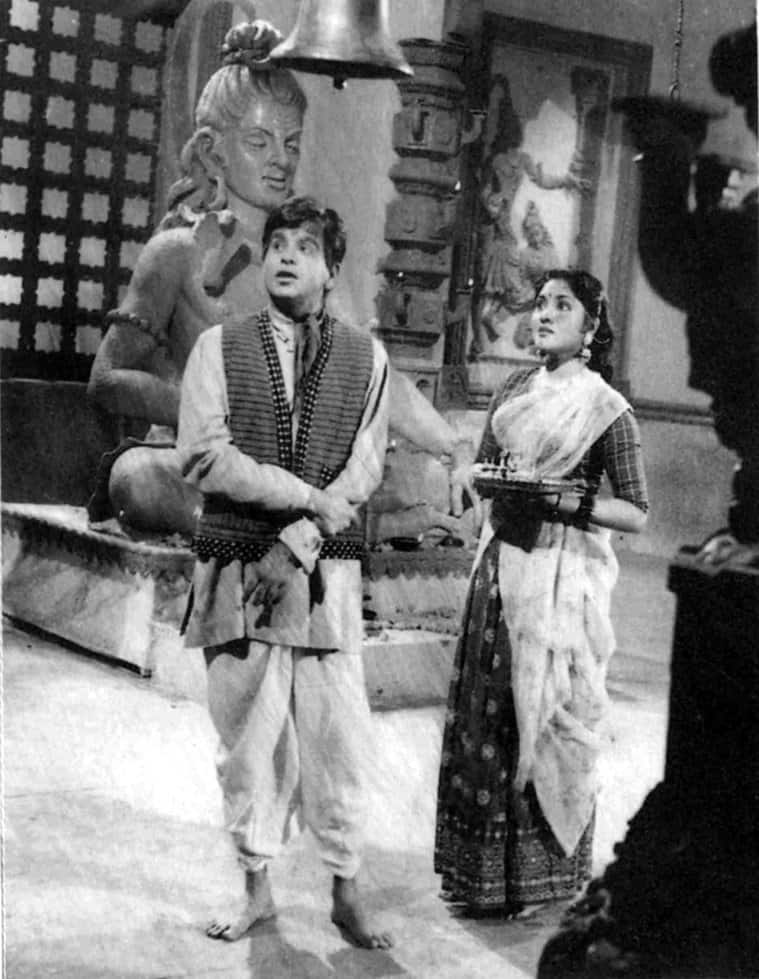 Dilip Kumar and Vyajayanthimala in a still from Naya Daur. (Express archive photo)

“A quintessentially Nehruvian film,” according to Meghnad Desai, Naya Daur is a critique of rapid modernisation in a largely rural India. The collective will of Man eventually trumps the evil whirr of the Machine. 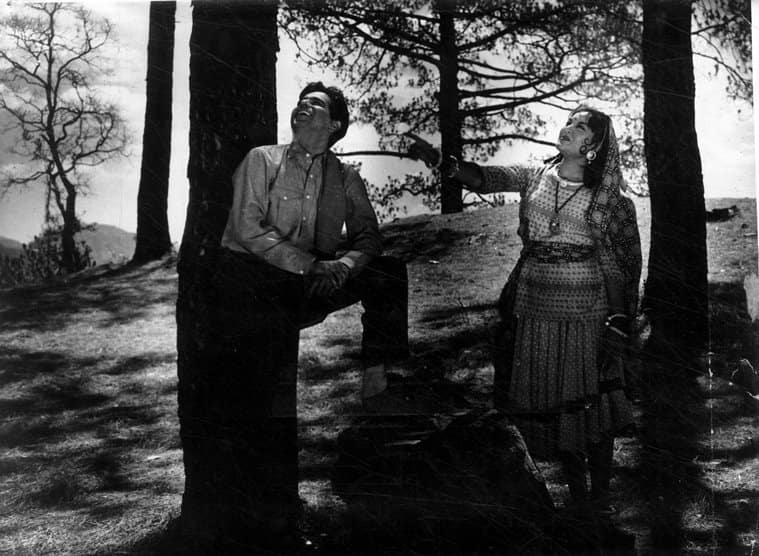 Dilip Kumar and Vyjayanthimala in a still from Madhumati. (Express archive photo)

Who can forget “Dil tadap tadap” from Madhumati? Bimal Roy gives this song and the reincarnation story of this Dilip Kumar-starrer a gothic noirish and enigmatic feel. The long shadow of Roy and his brand of cinema looms large on the Hindi film industry. Look up our list and you will notice three of his films have been featured here. It is fair, then, to posit that more than Mehboob Khan and V. Shantaram, it is to Bimal Roy that the 1950s rightfully belongs. If Pyaasa portrayed Guru Dutt as a disenchanted poet, in Kaagaz Ke Phool, he turns the lens inward, recalling his own life story as a filmmaker. A personal statement, Dutt could not deal with Kaagaz Ke Phool’s commercial blow – from which he never recovered.