During his entire stint inside the Bigg Boss 10 house, actor Gaurav Chopra held his calm and composure, sometimes to an extent of being termed too good to be true. In real life, if one speaks to him, he or she wouldn’t feel much of a difference except that he is more vocal about his opinions and observations about people. Perhaps that is exactly what even the audience wanted from him during the show. Post eviction, Gaurav had an exclusive chat with indianexpress.com, where he opened up about his biggest wish at the moment, the “scary” Swami Om and how the game of Bigg Boss forces people to act out of character.

Bani’s win will be my win

Friendships in Bigg Boss are of convenience, cynics say. And if one looks at the history of the celebrity reality show, the saying has been proven right in most of the cases. So, when the audiences saw actors Gaurav and VJ-model Bani Judge getting friendly with each other, they saw it as another fake relationship, a strategy followed by many to survive on the show. The duo, however, stuck to each other throughout the game, albeit many fights, and were each other’s only confidante in the house. Gaurav reveals that his topmost wish is to see Bani holding the winner’s trophy. While Bani and Rohan are Gaurav’s obvious choices for the title, the one man he can never see even in top five is the most notorious contestant, Swami Om. According to Gaurav, Swami Om doesn’t even deserve to live on the Earth, let alone be on Bigg Boss and win it! The actor makes some serious allegations on Swami, who already has a legal case against him.

“He does not deserve to be on the show, in the country or even on this planet. He should be thrown out. He has this very negative energy. You can’t sit around him. He talks about murdering people, those he has already murdered. He hides weapons and does black magic! He is scary. He is no baba, he has political affiliations but I don’t want to take names,” the actor says.

Talking about behaving out of character, Gaurav points out that Manu, Manveer and Mona, popularly called ‘M3’, are quite manipulative in nature. The actor says Manveer’s claim of playing the game from the heart is bogus.

“He keeps saying this but he is a manipulator along with the other two. When I asked him a few questions on his behaviour this Weekend ka Vaar, he fumbled so much and started praising me just so that I don’t question him further. People tend to relate simplicity with innocence. Being simple can mean you are not very intelligent but that doesn’t mean you are not cunning and likewise, if you are good at conversations and smart, that doesn’t mean you are diplomatic or manipulative,” Gaurav says. 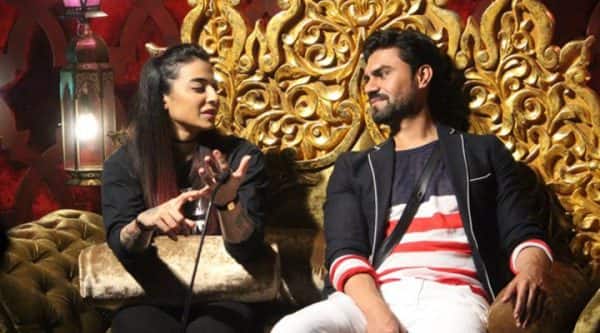 As much as they say that Bigg Boss is about bringing the real selves of contestants out, it has been seen time and again that it boils down to antics and histrionics, as that garner TRPs. In fact most of the times, through fans’ calls and Salman’s advices, it is made clear to the contestants that they need to “do” something to be visible on the show otherwise they will be evicted. Gaurav, who got the similar gyaan during his stay, admits that the show relies heavily on people’s desperation for a two-minute footage. The actor says there are many on the show, who have acted unnaturally just to grab eyeballs.

“I’ve been called fake for being calm on the show but I knew that I was not in the need of footage. I wanted to show the real Gaurav and that’s why with time people realised that this is how I am and as a result I am seeing such emotional and positive messages for me post eviction. People have signed petitions to the makers to get me back on the show because they found my eviction unfair. But there are people in the game who do all sorts of antics but say they are very simple people,” Gaurav signs off.