Bigg Boss 10 second runner-up Lopamudra Raut said she was happy to know that Swami Om got beaten up after being ousted from the Salman Khan-hosted show. Bigg Boss 10 finalist Lopamudra raut survived on Salman Khan’s show for 105 days and finished at the third spot on the grand finale.

Since day one of Bigg Boss 10, Lopamudra Raut was a personality, who couldn’t be ignored. It wasn’t her crown, which she kept mentioning every now and then on the show, but her feisty nature and self confidence which made the audience take note of her. As days passed, Lopa’s striking persona became more apparent as she gave back to infamous contestants like Swami Om and Priyanka Jagga and stood her ground even when faced with criticism coming from Salman Khan and other industry insiders.

WATCH VIDEO | Lopamudra Raut: I Knew Bani Judge Would Get More Votes Than Me

Ending her journey on a high note, as the second runner-up of Bigg Boss 10, Lopamudra has only positive takeaways from the controversial reality show. Interacting with the media post the grand finale, Lopa, who is known for giving never-ending explanations, spoke like a true beauty pageant winner, using calculated words. The only moment that she let go of the poise was when she candidly admitted that she wanted to beat up Swami Om many times on the show.

WATCH | Manveer Gurjar: I Won Bigg Boss 10 As I Was Genuine

Are you disheartened that you could not win and your biggest rival Bani got more votes than you?

I am slightly disappointed that I didn’t finish as a winner but I am extremely happy for Manveer (Gurjar, the show’s winner). It feels like I have won, because he is a lovely human being. He deserved to win. So, I am happy. Had Bani won, I would have felt the same. I didn’t feel bad that she got more votes than me. It’s the truth that she is in this industry from a long time. I am very practical about it. She has done a lot of reality shows and I know her popularity is more than mine. I am new in the field. So, it was expected that she would get more votes than me. Bigg Boss 10 finalists Lopamudra Raut and Bani Judge have remained at loggerheads throughout the season.

You were admired for taking stand, but there were times when you were asked to mellow down. Do you think your aggressive way of expressing opinions went against you as people thought you were overdoing it?

“I am a human being and so, I can make mistakes. I have made mistakes and I have owned them. I am short-tempered, I mean I used to be. Now, I have developed more patience. I always used to fear that my anger would go against me. But then, at the same time, if people ask me to be quiet and not react, I wouldn’t listen to them if I don’t feel it is justified. I am not afraid of anyone.”

You were also criticised for being too loud at times. In fact, a lot of your fights happened because others felt you always spoke at a high pitch, demonstrating dominance. What’s your reaction?

“I did come across as loud and hence was misunderstood. But I couldn’t help it as in Bigg Boss house no one listens to you if you talk sweetly or normally. You have to make people hear you out and you have to make your presence felt. No one shows patience there and hence I had to be loud to keep across my point.” 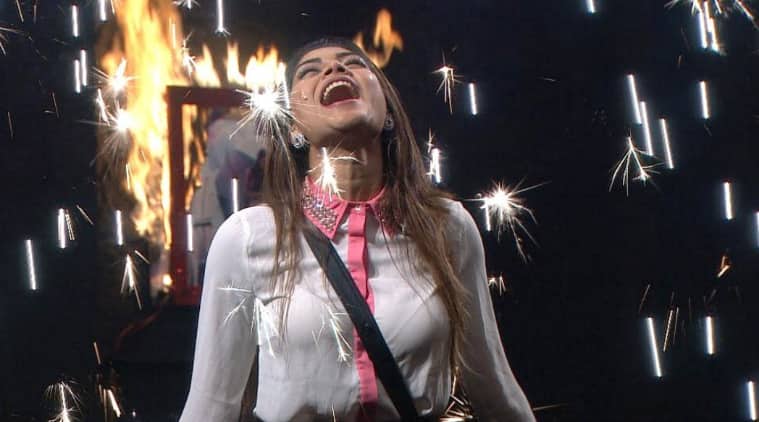 Being an international beauty pageant winner, didn’t you feel insecure that your fights with Swami Om, Priyanka and Bani wouldn’t paint a good picture of yours?

“Just because I am a beauty pageant winner doesn’t mean I will tolerate injustice. As a person and as a woman, I will always give back if I feel wrong is being done with me. If someone is charging at you (talking about Bani and her physical fight), you shouldn’t tolerate. You should give back. That’s what I did. That action needed a reaction and that’s what I gave. At that time I didn’t think of the title. But yes there were many moments when I thought to myself that what if this hampers my hard-earned crown. I have worked a lot to achieve it. So, I was worried that whatever was happening with me inside the Bigg Boss house might affect my title.”

Your best friend Rohan Mehra said that the show heavily favoured the commoners. Do you agree?

“Everyone has his or her own take on things. But one thing I know is that I never carried any attitude of being a celebrity. Some celebs did carry an air of attitude and they didn’t want to wash dishes and do other stuff in the house. But Mona Lisa and I were the only ones from the celeb team who were friendly with the commoners since day one. Today, we are friends with many of them.” You were the first one to take on Swami Om. After creating mayhem inside the Bigg Boss house, he has been unstoppable even outside. Are you aware of the bizarre claims made by him about the show and Salman Khan?

“I don’t know what he has been saying but who would even take him seriously? You can’t believe that man! But yes, the first thing I heard after coming out was that he was beaten up on a channel! More power to those people. They did what we could not inside the house as we were bounded by rules of Bigg Boss. I used to tell him, ‘Swami Ji please get your act right, else people will hit you once you leave the house.’ That’s what exactly happened.”