But TMC accused the opposition parties of hatching a "political conspiracy" ahead of the assembly election dubbing the sting operation by a news portal as "manufactured". 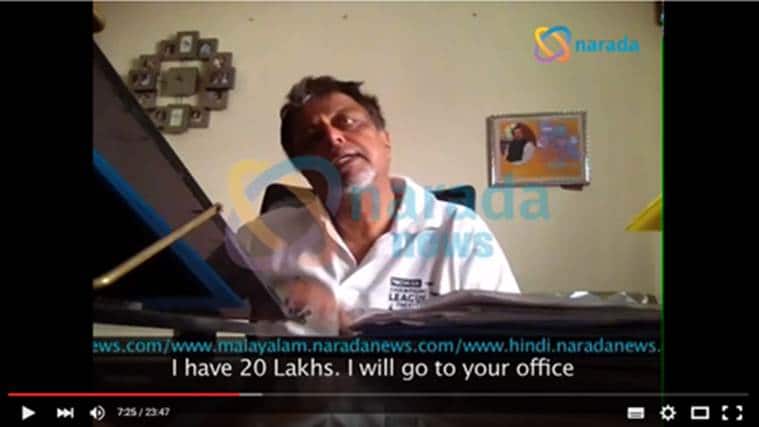 A PURPORTED STING operation aired on Monday, less than a month ahead of the assembly elections in West Bengal, shows 11 leaders of the Trinamool Congress (TMC) — including state ministers Subrata Mukherjee and Farhad Hakim — being allegedly bribed to help a fictitious Chennai-based company get business in the state.

Journalists Mathew Samuel and Angel Abraham of Narada News, a news website, set up a fictitious company called Impex Consultancy in 2014 and approached several leaders of the party “seeking favours” for this entity. The website claimed to have incurred expenses of up to Rs 1 crore to bribe politicians and middlemen. Most of the purported conversations happened over two years between January 2014 and January 2016.

TMC MP Derek O’Brien described the purported sting operation as a “smear campaign” and indicated that his party would file a defamation case against the website for putting out “doctored videos”.

“We are completely transparent. (Chief Minister) Mamatadi’s credentials are impeccable. The people of Bengal know. We are busy with elections now. So whoever has concocted this smear campaign, please go ahead and concoct your smear campaign or your doctored video,” said O’Brien in a statement.

Former union railway minister Mukul Roy is the most prominent TMC leader shown in the purported sting. Roy, as seen in the half-an-hour video footage shown at the press conference on Monday, does not accept Rs 20 lakh but asks Samuel, who is posing as a representative of Impex Solutions, to hand it over to Syed M H Mirza, a police officer in Burdwan. Mirza was among the officers whose transfer by the Election Commission ahead of the 2014 Lok Sabha elections was opposed by Chief Minister Mamata Banerjee.

“Give it to my office, I am not taking it straight away. I will tell my men, so you give it to them,” Roy is heard saying. The footage also shows Mirza flaunting his proximity to Roy.

Former Union Minister of State for Tourism in the UPA government and party leader Sultan Ahmed is seen accepting Rs 5 lakh. He then purportedly asks for more. He also promises “assistance” to Samuel for “whatever” his company needs.

Mayor of Kolkata Sovan Chatterjee, in response to the journalists request to introduce him to important people in the government, is heard saying,”after the elections, I can introduce.” Narada News alleged that Chatterjee was given Rs 5 lakh as bribe.

While, apparently, negotiating the bribe amount, Hakim, West Bengal’s urban development minister, is heard saying, “We don’t deal with peanuts. What would be left for kids if we deal with small stuff? Don’t even touch that.”

Although a majority of the 11 TMC members are clearly seen accepting money in the edited footage shown during the press conference, in many parts the motive behind the payment is unclear. For instance, Mukherjee, who is thestate’s minister for panchayat and rural development, just says “okay”,when Samuel puts Rs four lakh on his table.

Similarly, the sting on TMC leader Kakoli Ghosh Dastidar shows the journalists offering Rs 4 lakh following which he asks, “anything more?” To this, Dastidar replies, “nothing at the moment”.

Madan Mitra, former state minister who stands accused in the Sharada Chit Fund Scam, on receiving the money directs his aide to keep it away. The motive of the payment here again is unclear.

On being questioned about these ambiguities, Samuel told reporters, “We have 52 hours of footage which has been uploaded online. What we have shown you is the edited version. The motive behind each of the payments is evident if you go through the raw footage. We told them that we were a Chennai-based company and that we want projects in the state. We asked them to lobby for us.”

On why the purported sting operation, which was conducted over two years, was being released so close to assembly elections in the state, Samuel said it was a “coincidence”. “We started this two months before the Lok Sabha elections after news of the Sharada Chit Fund scam surfaced… we set up Narada News in January this year and decided to air the sting.”

Samuel explained that the money offered as bribe was taken from the funds he sourced from NRI friends and supporters. He added that he was open to any inquiry into the funding of his news platform.

Samuel was part of the Tehelka team that conducted the sting operation titled ‘Operation West End’ in 2001 and released purported footage of government officials and politicians, including then BJP president Bangaru Laxman, allegedly accepting money tied to a fake arms deal.

Reacting to the video, the BJP demanded the resignation of West Bengal Chief Minister Mamata Banerjee and the CPI(M) sought President’s rule in the state.

“She should not stay as a chief minister even for the few remaining days before election. Her party leaders were involved in corruption and she has given leadership”, he alleged.

Those who feature in the purported sting operation and how much were they allegedly paid: