PO-Shen Loh mentors some of the top high school math students in the country as coach of the US Mathematical Olympiad team. But he also wants to improve the teaching of all math students. Po-Shen Loh, two-time winning coach of the USA Math Olympiad Team, gives a talk on mathematical puzzles at the Museum of Math in New York on August 23, 2016. The Carnegie Mellon professor has rediscovered a technique that the ancient Babylonians used to solve quadratic equations. (Christian Hansen/The New York Times)

The quadratic equation has frustrated math students for millenniums. But a math professor at Carnegie Mellon University in Pittsburgh may have come up with a better way of solving it. “When I stumbled on this, I was just completely shocked,” said the professor, Po-Shen Loh.

Quadratics, which are introduced in elementary algebra classes, pop up often in physics and engineering in the calculating of trajectories, even in sports. If, while watching the Super Bowl, you had wanted to estimate how far a pass thrown by Patrick Mahomes travelled through the air, you would have been solving a quadratic equation. The equations also show up in calculations for maximizing profit, a key consideration for anyone who wants to succeed in business.

Loh has not discovered something entirely new. Indeed, his method mixes together ideas dating back thousands of years to the Babylonians. But this is not how modern algebra textbooks present the topic.

“To find out that there’s this trick from thousands of years ago that you can import into here is amazing to me,” Loh said. “I wanted to share that as widely as possible.”

Loh mentors some of the top high school math students in the country as coach of the US Mathematical Olympiad team. But he also wants to improve the teaching of all math students. “Everyone assumes the only people I work with are Olympiad students,” said Loh, who is the founder of the educational website Expii. “That’s not true. My passion is everyone.”

A few months ago, Loh posted online a paper describing his method, and teachers have already tried it in their classrooms. “I was really surprised that most of them were getting it,” said Bobson Wong, a math teacher at Bayside High School in Queens, New York, who used the approach in an algebra class where many students fear math. “They were able to do it on their own.”

The burst of pedagogical discussion about quadratic equations highlights the ability of the internet to spread new teaching ideas quickly.

“It’s innovation in education that’s being pursued the right way,” said Michael Driskill, chief operating officer of Math for America, an organisation that recognises top teachers and provides forums for them to exchange ideas. (Wong is one of the people that Math for America has designated as a master teacher.)

Driskill said Loh did not proclaim that he had something definitively better, but instead, “He put it out to teachers and asked, ‘Does it work in classroom?’”

First, a quick review about quadratic equations and parabolas:

A parabola is a symmetrical curve that can describe the path of a projectile, like a thrown football, or the curve of a suspension bridge.

Parabolas are defined with variations on the equation y = x². 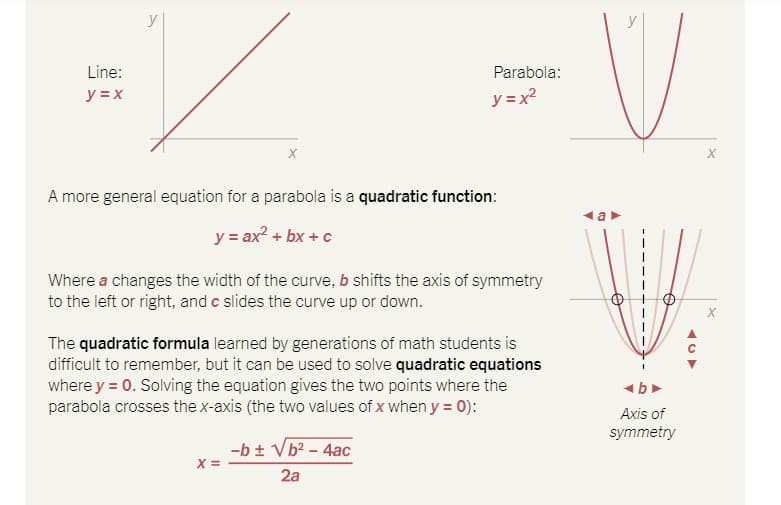 Before students are presented with the quadratic formula, they’re taught a simpler method to solve certain equations. For simplicity, we’ll consider an equation where a = 1.

You might recall your teacher asking you to factor the jumble of symbols. That is, you hoped to find two numbers r and s such that

Figuring out the factors that work is essentially trial and error. “The fact that you suddenly have to switch into a guessing mode makes you feel like maybe math is confusing or not systematic,” Loh said.

Guessing also becomes cumbersome for quadratics with large numbers, and it only works neatly for problems that are contrived to have integer answers.

Loh’s method eliminates this guessing game. But for many algebra students, the jumble of algebraic symbols is still confusing. So Wong tells them to sketch a parabola.

“If you graph it, it’s much easier for the kids to understand what’s going on,” he said.

How the new method works

This alternate method for solving quadratic equations uses the fact that parabolas are symmetrical.

For example, in the parabola y = x² – 4x – 5 the two solutions when y = 0 are the symmetrical points r and s, where the parabola crosses the x-axis.

The two solutions to the quadratic equation will be the axis of symmetry plus or minus an unknown amount, which we’ll call u. In this example: r = 2 – u and s = 2 + u

To find u, we want the product of r and s to be equal to c, which in this example is –5. Rewriting r and s in terms of u:

The same method also works for equations that are not readily factorable.

That’s when students turn to the quadratic formula. But they often misremember it — the usual derivation is a bit convoluted, involving a technique called “completing the square” — and get the wrong answers.

Loh’s method allows people to calculate the answers without remembering the exact formula. (It also provides a more straightforward proof.)

“Math is not about memorizing formulas without meaning, but rather about learning how to reason logically through precise statements,” Loh said.

Wong said Loh’s version is easier for students because it “provides one method for solving all kinds of quadratic equations.”

A technique with ancient roots

He even found out that a math teacher in Sudbury, Ontario, named John Savage came up with a similar approach 30 years ago. An article by Savage in the journal The Mathematics Teacher in 1989 laid out almost the same procedure, although Loh filled in some nuances of logic in explaining why it works.

“I honestly can’t remember exactly where the eureka moment was,” Savage said in a phone interview. But it seemed to be an improvement over the usual way of teaching the subject.

He continued using that approach, as did some other teachers he knew. But the internet was still in its infancy, and the idea faded away.

“It never caught on,” Savage said. “Looking back on it, I should have pushed it a little more. I think it’s so much easier than the traditional way.”