Karnataka: VTU exams to continue amid rising COVID-19 cases, Deputy CM says students will be allowed to stay in hostels

Many students had said that various departments were asking them to vacate the hostels which had become an added challenge amid the pandemic. 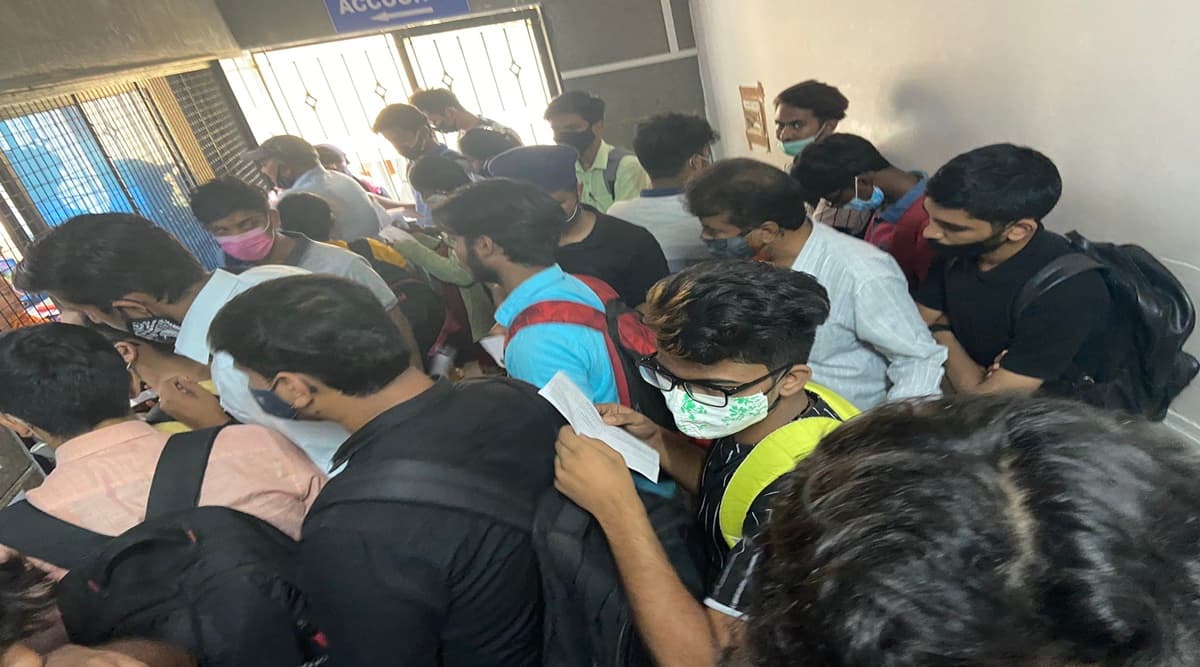 A photograph shared by an engineering student from a VTU exam centre in Bengaluru shows lack of social distancing. (Special arrangement)

Karnataka’s Visvesvaraya Technological University (VTU)’s decision to hold the remaining exams for first-semester engineering students even as the government announced new measures, such as a weekend curfew and extended night curfew timings till May 4, has not gone down well with many students.

However, concerned about losing out on the academic schedule, most students said they had to “forcefully give their consent” to the university’s decision. But, various departments asking them to vacate hostels have now become a new challenge for many.

One such student, Dayanand, who hails from Tumkur said, “Many students like me come from other districts and even states. They have been asked to vacate the hostels. Despite taking the risk to attend the exams amid the pandemic, no one has come forward to help us get through this difficult period.”

He also expressed his helplessness to find an alternative place as he had no relatives or friends who could offer a place to stay because of the ongoing pandemic crisis. “We have been psychologically strained by all means for being forcefully consented to take these exams risking our lives. Where will we go now,” he gasped.

Meanwhile, Mustak, a native of Chitradurga who studies in a college in Bengaluru, said, “There has been hardly any social distancing measures in place at colleges even as big announcements about SOPs (standard operating procedures) and CAB (Covid-appropriate behaviour) were made repeatedly. We are pursuing a course that needs to be completed on time for placements but it is really distressing to see the government not doing anything for our safety.”

He added, “We humbly request the authorities to consider our lives too, during this pandemic time and take an appropriate decision to either postpone the remaining exams or to at least allow us to stay in hostels till the exams get over.”

Echoing the students’ demands, the All India Democratic Students Association (AIDSO) condemned the attitude of the authorities alleging mismanagement and lack of coordination among departments such as Higher Education (in charge of universities), and Social Welfare (in charge of government hostels).

Also read| Many Bengaluru hospitals running out of oxygen supply; have to depend on ‘black market’, says doctors

“Students are being forced in many hostels to immediately leave to their natives. Several students have exams tomorrow they do not know what to do. The government should take a responsible decision soon,” Ashwini KS, AIDSO state president said.

Following the outcry, Karnataka Deputy Chief Minister C N Ashwathnarayan, late on Thursday, directed government officials to ensure that students who are writing various examinations are allowed to stay in hostels. “They should not be asked to vacate,” Ashwathnarayan, who is also in charge of the Higher Education Department, said.

He clarified, “This includes engineering, diploma, polytechnic, degree, and post-graduation students. Hostels should also continue to provide food and accommodation facilities till the exams are completed.”

Meanwhile, senior officials from the Social Welfare Department confirmed that the order was issued purely based on orders from the Chief Secretary to do so, in line with the restrictions announced across the state till May 4.

“We have been getting calls from our district officers pointing out the grievances raised by the students. A discussion will be held on Friday morning with the in-charge Social Welfare Commissioner as soon as he takes charge. Further orders will be issued as per the decisions taken then,” P Nagesh, Deputy Director (Education), from the department told Indianexpress.com.

Another senior official said, “We have been informed about the situation of students taking VTU exams. We hope to take a student-friendly decision, but we also need to adhere to the orders issued by our higher-ups in this regard.” The official added that Social Welfare Commissioner was on leave for 15 days and hence an in-charge Commissioner had to be deputed to take such calls.