JEE Main Admit Card 2019 HIGHLIGHTS: The National Testing Agency (NTA) has released the admit cards for the JEE Mains 2019. The candidates can download the JEE Main 2019 admit cards through the official website, nta.ac.in. The first phase examination will be conducted from January 6 to 20, 2019 and the second phase in April. This time, students can either sit for both JEE Main January or April exam.

The admit card contains important details like exam centre, time, name, date of birth, gender, state code of eligibility and category. In case of any discrepancy, communicate NTA immediately for necessary action. Students need reach the examination venue at least two-and-a-half hours before the start of the examination. JEE Main January exam results will be available by month-end.

Step 3: In the new window, registered with your user id and password 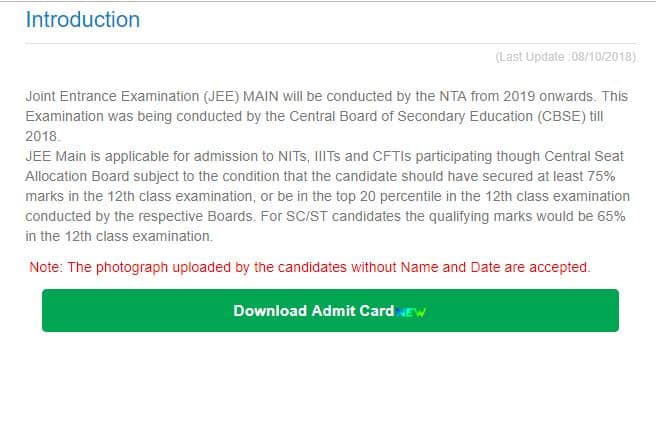 The admit card for the Joint Entrance (JEE Main) exams will be released after 6 pm. As per the official, the website of the National Testing Agency (nta.ac.in) has faced some technical glitches and it will take some time to resolve. The NTA is trying to release the admit card by tonight.

JEE Main 2019: Till when you can download admit card

Step 3: In the new window, registered with your user id and password

JEE Main 2019 admit card: If the website hangs, what are the alternative options

Following the trend, the website may hang due to the load of the users, minutes after the release of admit card. If the students may face this kind of trouble, they have to wait till the website started running properly.

The admit card will be released shortly at the official website, nta.ac.in.

JEE Main 2019: How will you know that the admit card link is active

JEE Main 2019: Keep a tab on the official website

JEE Main 2019: Admit card to be live shortly at the website

The official website of the National Testing Agency, nta.ac.in, will shortly host the admit card. The candidates can download through it

Step 4: In the new window, registered with your user id and password

Simple integrals and type of integrals as limit of sum. Properties and evaluation of definite integrals. Determining areas of regions.

JEE Mains 2019: Students can appear only in an examination at a time

While the JEE Main 2019 will be conducted twice in a year, the number of attempts for admission in a particular academic session will be treated as one. Candidates can put forth their best score for admission to an institute, even if they have appeared multiple times. Also, since there is only one attempt for JEE Advanced – entrance to IITs – candidates can only appear once a year in the JEE Advance and that would be considered final. Each candidate is allowed to appear for three consecutive years for JEE Main exam.

Make a study plan: It’s better to make a study plan for every day to ensure you are picking up all the loose ends. You may know your strengths and weaknesses, try to allocate an equal amount of time for each subject.

Prepare for online: More importantly, acquaint yourself with the various aspects of online examination as JEE Main is a computer-based exam. While some of you may be used to taking tests on pen and paper, prepare yourself for the computer-based format. You can do this by either visiting practice centres or practising on e-learning apps.

Select the order of your subjects: Since the question paper will have three different sections for each subject, find out which order is preferable for you to get the best results.

Keep revising: Apart from taking online tests, don’t forget to jog your memory by going back to the notes and flashcards you made earlier.

Healthy competition: Some of you may not like to group study in the last month, but being in a competitive setting may have a positive impact on your mindset.

Summarise each chapter: Write down the highlights of each chapter of every subject in a notebook to easily access them whenever you want. Since you won’t have enough time for an in-depth revision one day before the exam, these notes will help you remember the key points.

Create flashcards: Besides this, make a large stack of flashcards containing all important formulae, concepts and diagrams to learn them better.

Clarify your doubts: You can also use e-learning apps to clarify your doubts regarding a particular topic. These digital platforms let you upload a picture of your problem and chat with an expert to solve it. What’s more, through these platforms you can keep a tab on your progress.

JEE Mains 2019: Attempt the question after reading it properly

When students practice similar questions too often, they develop a tendency to identify and solve them as per their self-interpretation. MCQ questions are often framed in a deceptive manner. Ensure that you read and understand the questions properly before attempting them. Also, avoid silly mistakes.

After performing well in mock drills and practice papers, students, to a certain degree, become overconfident. This results in careless mistakes and wasting a substantial amount of time in rechecking calculations.

Self-confidence is the key to crack JEE Mains exam

This possibly is the biggest blunder that students make during the preparation. Giving room to doubts directly increases hesitation and leads to lack of confidence. Trust yourself and your abilities. Develop a positive mind-set. To do so, implement a goal-oriented strategy. For students that are not able to deal with this problem must set long goals initially. Moving forward, successively decrease the time period between. However, this activity should not be done during the last 15 days before the examination.

Students often make their preparations synonymous to studying with an exhaustive combination of reference books and study material. More than 70 per cent of the questions are either from NCERT or are an extended version of its learnings. Students should primarily stick with NCERT course books and head towards reference books only upon its completion.

Do not lose focus on conceptual understanding

It has been observed that students prefer method-based approach rather than applying a conceptual understanding over the questions. Initially, this approach might serve the purpose, but it can become quite detrimental for students because many a times, despite being framed on similar lines, a slightly off-patterned question becomes difficult to understand. Thus, it is always advised to apply concepts in each and every question that you solve.

JEE Main admit card at 2 pm: How to download

As per the official, the admit card of the JEE Main exams will be available online after 2 pm. The candidates can download the admit card through the official website, nta.ac.in. The examination will be conducted from January 6 to 20, 2019. JEE Main 2019 HIGHLIGHTS: NTA to conduct exam instead of CBSE

JEE Main admit card 2019: NTA will release the admit card of the Joint Entrance Examination (JEE) on the official website today at jeemain.nic.in. To qualify for appearing in the exam, students need to have at least 75 per cent marks or be in top 20 percentile in Class 12 examination. For SC/ST students, the qualifying marks would be 65 per cent in the class 12 examination.