After investing a year in market research and visiting different cities like Kota, Hyderabad and Delhi to understand the needs of the students, Ravi Nishant formally launched Edvizo, an ed-tech startup that helps young learners make wise decisions about their academic future. 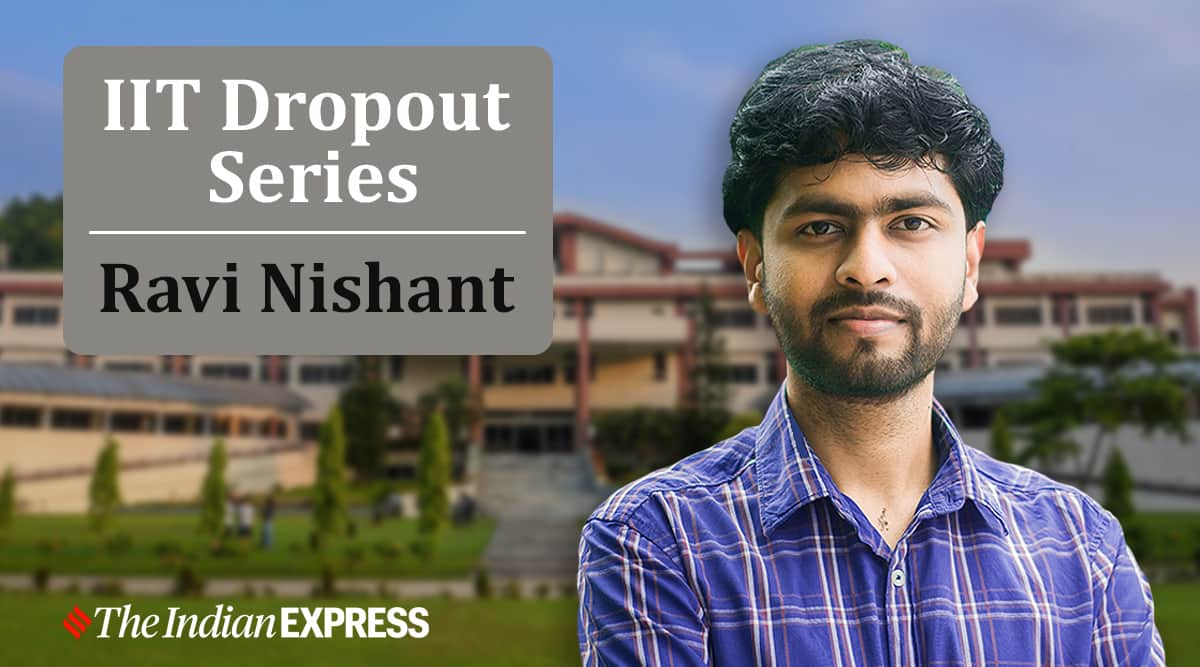 Ravi opted for civil engineering without realising his interest in the subject. (Graphics by Abhishek Mitra)

‘IIT Dropouts’ is a series by the indianexpress.com on students who dropped out from the premier engineering schools to follow their true calling. Read their stories here.

Ravi Nishant, a native of Banka district in Bihar was an extraordinary student right from childhood. From passing class 12 at the mere age of 16 to qualifying JEE exam in six months of preparation, Ravi put in every bit of effort to gain academic excellence.

With his father being a labourer, Ravi knew that education was the only way to change his family’s financial situation. Therefore, like every other student in Bihar, Ravi aspired to be a civil servant. But destiny had other plans for him.

“While I was in school my teachers guided me on how IITians have a better chance in qualifying the UPSC Civil Service exam. Therefore, in class 12 I decided to appear for JEE exam. But this decision wasn’t well taken by my parents who were worried about the costly coaching fee,” Ravi shared.

“Initially my parents were not convinced with my decision to prepare for IIT as they didn’t have the means to send me for coaching. However, after little convincing, they agreed to it. It took them some time to arrange for the coaching fee and by then only six months were due for my JEE attempt. Somehow I devoted all my time and studied for 18 to 19 hours to clear the exam. The hard work bore fruit and I was able to get into IIT-Guwahati,” he further explained.

Even though the path was clear, Ravi was unsure on which branch to choose for further studies. Guided by his cousins, Ravi opted for civil engineering without realising his interest in the subject.

“By the time I settled in IIT, my dreams changed and pursuing civil services took a back seat. Even after spending an entire semester in civil engineering I was not happy with that as well. It was an eye-opener as at that moment the future appeared cryptic as I had no goals,” Ravi said.

“After talking to many seniors, I gained insights on the relevance and necessity of learning coding as an engineer. Hence, I began to take classes for coding. This is when I recongnised my interest in computer science. So instead of attending civil engineering lectures, I used to attend CS lectures in college,” Ravi told indianexpress.com

In the second year at IIT-Guwahati, Ravi started taking up freelancing projects and joined a few start-ups to gain insights into how coding can be used in practical applications. Meanwhile, he also proposed the college authorities to provide him the opportunity to digitalise the entire campus at a much lesser cost.

“After constant persuasion, the college administration agreed on it, and I with a team of 20-25 volunteers worked on the digitalisation of the IIT-Guwahati campus. With this, I understood that I made a mistake in choosing civil engineering as a discipline,” he said.

Lack of guidance and counselling at the right stage led Ravi into the wrong course. Hence, to save other students the same despair, Ravi decided to launch his start-up that will guide and counsel students right from an early age on which course and college to choose for higher studies.

“Learning from my experiences, I wanted to make an impact on the other students who didn’t have the right guidance and end up pursuing the education they are not interested in. Hence in the fourth year of graduation, I decided to formally quit IIT-Guwahati to invest time in market research for my start-up idea,” he shared.

After investing a year in market research and visiting different cities like Kota, Hyderabad and Delhi to understand the needs of the students, Ravi formally launched Edvizo, an ed-tech startup that helps young learners make wise decisions about their academic future.

“In the pre-placement offers, I was offered a package of Rs 24 lakh. However by that time I had decided to quit the course. A person has to work for atleast 30-40 years of his life and if he/she is not happy in their line of work, no matter how hefty the paycheck is, it seems worthless. Therefore, it is necessary to identify one’s interests in the early stage to not repent for the rest of the life,” he believes.

On the banks of the furious Congo river, a 5-Star emporium of ambition

Sakshi SarohaSenior Sub Editor at The Indian Express, Sakshi is a major in Economic... read more