GSEB SSC 10th Result 2018, Gujarat Board SSC 10th Result 2018 Updates: The result of Gujarat Secondary and Higher Secondary Education Board (GSHSEB) class 10 examination has been declared today, on Monday, May 28 at 8 am. The result will be available at the official website, gseb.org.in. Moreover, the results will be available at examresults.net, indiaresults.com. This year, both the SSC and HSC exams started on March 12.

In terms of performance, this year, the highest and lowest passing percentage districts are from south Gujarat. Surat registered with highest 80.06 per cent, only 37.35 per cent of the students from the tribal district of Dahod cleared the exam. After a decline in Class 12 Science results, now Class 10 results too witnessed a dip in schools recording 100 per cent results. From 451 in 2017, this number declined to 368 this year.

The pass percentage of regular students in 2016 was 67.06 percent. As many as 3750 candidates scored the highest grade of A1 (99 to 100 marks). This is higher than the previous year when 3115 candidates scored in this bracket.

A total of 7.75 lakh regular students appeared for the exams. Out of this, 5.28 lakh were successful and eligible for qualifying certificate of secondary examination.

Bottom five districts performance in Class 10 exams of Gujarat Board

Expressing satisfaction over the results, Gujarat Education Minister Bhupendrasinh Chudasama said while congratulating the students said that those who could not clear exams this year should not feel let down try to remove all shortcomings with more hardwork and clear in the next attempt.

At 908 total examination centres across the state, a total of 7.90 lakh regular students appeared for their Class 10 exams. Out of this, 5.33 lakh have passed the exam. These students are now eligible for qualifying certificate (EQC) of secondary examination. As students are not awarded marks but grades, to qualify in a subject a candidate must obtain a minimum of grade D (33 till 40 marks) in all subjects.

This year too, despite grace marks and counting repeaters and private candidates separately, the overall pass percentage of over 10.61 lakh students in Gujarat who had appeared for Class 10 GSHSEB examinations including 7.90 lakh regular, 2.33 lakh repeaters and 37,725 external or private candidates stands at 53.62 per cent, almost similar to 53.10 per cent recorded in the year 2017.

Performance of Surat best among districts in GSEB SSC results

In terms of performance, this year, the highest and lowest passing percentage districts are from south Gujarat. Surat registered with highest 80.06 per cent, only 37.35 per cent of the students from the tribal district of Dahod cleared the exam.

Girls this year have outperformed boys with better pass percentage. Topper Savani Hil Ishwarbhai holds 99 per cent. Overall, the pass percentage is really low this time. Physical copies of the marksheets are not available and students can obtain the same till 2 pm.

Students can now check their respective scores at the official website, gseb.org.in. If they are unable to open the same, they may also check the result at other private websites such as examresults.net, indiaresults.com. Students will be able to obtain their mark sheets between from 11 am to 2 pm at respective district examination centres today itself.

This time, a total number of 11,03,854 students had appeared for the Class 10 SSC exams, out of which 6,973 were found to be involved in unfsir practices.

Wait to be over soon

Over 10 lakh students had appeared for GSEB SSC exams this year. The installation of CCTV cameras at exam centres is among other possible reasons for the decline in the pass percentage of Class 12, Chudasama had said. The CCTV project was launched for GSHSEB exams in March 2015. The project also received the SKOCHaward in its inaugural year under the smart governance category. 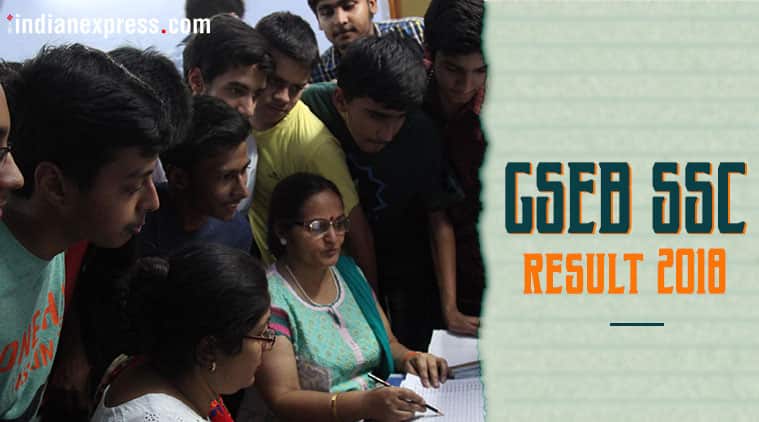 The students can access their results and also print the score card in PDF form from the website. However, the score card will be for the reference purpose only as the original mark sheets is to be issued by the respective schools. The results are accessible using exam role number.

Over 1.36 lakh candidates took the Gujarat Common Entrance Test (GUJCET) at 34 centres across the state conducted by Gujarat Secondary and Higher Secondary Education Board (GSHSEB) this year. In the first session of Physics and Chemistry conducted from 10 am to 12 noon, out of total of 1.36 lakh registered candidates, 1,34,979 took the examinations.

Among districts in Gujarat, Rajkot had topped with 72.99 per cent, while Chhota Udepur had the worst pass percentage of 38 percent. Out of over 1.34 lakh students who appeared for Gujarat board exams, pass percentage of girls was higher than boys.

The last year's GSEB results showed a wide gap in the performance of students from English-medium and Gujarati-medium schools. A total of 7,75,013 students had appeared for the examination held between March 15 and 25, 2017. Last year the pass percentage was 67.06.

All the students who appeared for the examination can check the results through the websites, gseb.org.in, examresults.net, indiaresults.com. The board had earlier declared the results of class 12 Science examination on May 9. This year, there was a dip in the pass percentage of around 8.9 per cent. 72.99 per cent students cleared the examination, the lowest recorded in the last five years (2012-2017).